Special Events Blog
brought to you by
Ace and Gala Awards 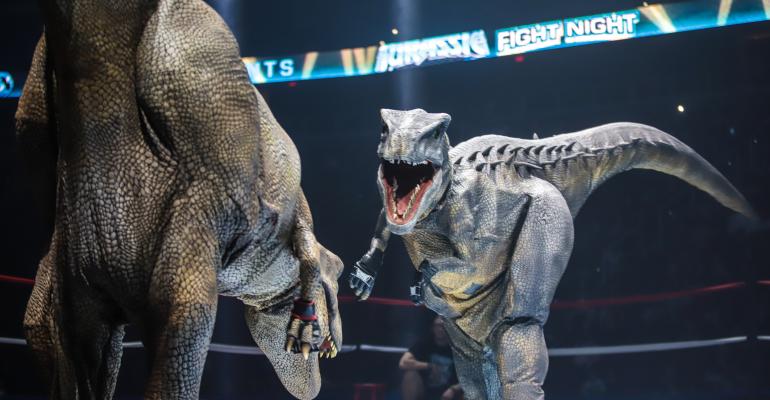 What happens when you combine the dinosaurs-come-to-life thrill of the 1993 hit film Jurassic Park with the competitive entertainment of UFC Fighting? Pangaea’s Jurassic Fight Night, that's what. And that’s what captured the attention of over 20,000 families for two nights straight at the Gila River Arena last October. Gila River Arena is home to the National Hockey League’s (NHL) Arizona Coyotes and hosts concerts and other entertainment acts throughout the year.

Steve LeVine Entertainment and Public Relations created this successful family-friendly event with over three months of training and choreography for human-operated dinosaurs. Each dinosaur suit weighed over 50 pounds and reached 10 feet in height, requiring endurance and the ability to perform in confined spaces. Each boxing round featured dinosaurs fighting in three two-minute rounds that were judged by a panel of local celebrities, influencers, and former/current MMA fighters. The event included photo ops with the dinosaurs, pyrotechnics, live entertainment between fights, music, dance groups, concessions, and a variety of other features. Each guest was given their own personal set of Jurassic Fight Night Thundersticks to get loud in the crowd and an interactive program allowing attendees to select winners for each of the scheduled dinosaur fights.

Throughout the summer, we will be featuring these winners and their spectacular events on the blog, so get inspired and get your event submitted for a 2023 Gala Award!
Read our submission blog post to learn more about submitting your event.