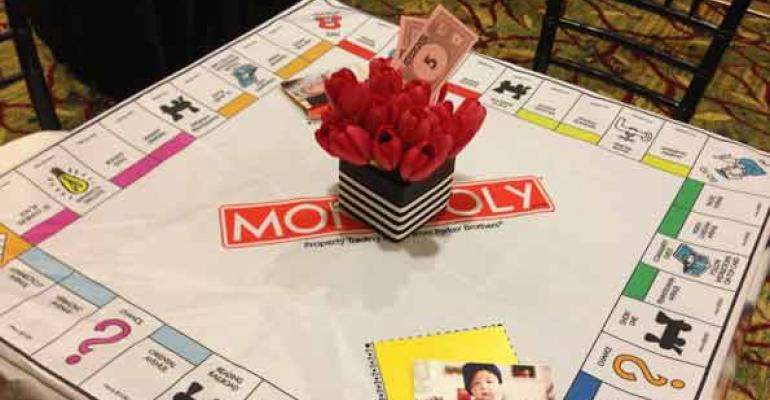 As Budgets for Children's Events Don't Budge, Planners Pull out their Creativity

Special event professionals share tactics for dealing with budgets for children&#39;s events--such as bar and bat mitzvahs, Sweet 16s and birthday parties--in light of the fact that budgets for these events have remained stubbornly low since the recession.

In contrast to other event segments, budgets for children's events haven't yet bounced back from the recession-days doldrums.

In another sign of the slow recovery, sibling mitzvah parties are on the rise, notes Patti Weiner, owner of Plan-It Parties in North Potomac, Md. “If clients have two children that are close in age, they have been combining the mitzvahs."

Weiner says clients make the request because “it means one cost instead of two--one photographer, one music contract, one venue." And while the guest count will likely rise, "[clients] are saving in the end,” she explains.

ALL FOR ONE The common practice of essentially staging two parties at bar and bat mitzvahs—one area and menu for the adults, with a different space and menu for the kids—seems to be fading away.

As Hassel puts it, “We are seeing less emphasis on the differences in generations and more blending." For example, mitzvahs are beginning to feature food stations for all guests, instead of plated dinners for adults and buffets for teens.

But another reason that adults and kids are dining on the same menu is that kids have become “real foodies,” according to Koby Bar Yehuda, head of KBY Designs, an international event design and production house. He says children's tastes have evolved; instead of classic kid fare, they want what adults want –including “their own cocktail bar with virgin cocktails,” he adds.

Penny Rabinowitz, president and owner of Save the Day Events, with offices in Englewood, N.J., and Israel, agrees that kids today have grown-up tastes. Today, they want "colorful parties," she says, and “sushi, sushi and more sushi!”

But if parents are springing for one party, they are demanding it be a special one.

GO BIG ON THEMES For example, the event theme is often no longer expressed merely in decor accents. Instead, the theme dominates the party.

Sophia Park, founder of Petite Productions in Tustin, Calif., recently took the classic board game Monopoly and supersized it. For a child's first birthday party, Park created a party space complete with a white dance floor emblazoned with a red Monopoly logo decal. Long tables with solid-color runners represented the color bars on the game's property cards. “The highlight was our little birthday boy motoring in for his grand entrance in a mini classic car," Park explains, "just like the Monopoly man!”

At a recent bat mitzvah held near the festive holiday of Purim, Bar Yehuda and his team created a theater balcony in the ballroom, inspired by the “Muppet Show's” two wisecracking hecklers, Statler and Waldorf. But at the party, the bat mitzvah's two elder sisters appeared on the balcony. Bar Yehuda hired a professional comedy writer to create sketches for the sisters, who served as the masters of ceremonies. "We created unique and fun interactions with the guests giving a twist and another vibe to the ‘boring’ usual stuff everybody does,” Bar Yehuda says.

See the full story in the May-June issue of Special Events, which is available to ISES members for free and to subscribers. Not a subscriber? We can fix that; just click here.

Experts in Children's Parties Deliver Fun for all Ages
May 01, 2012

Children's Events Depend on the Attraction of Interaction
May 01, 2011

Having a Ball: KBY Designs Gives a Bat Mitzvah a Venetian Masked Ball Theme
May 23, 2012