The event team transformed a synagogue into the celebration space for more than 150 adults and 100 children.

The team’s objective was not only to reinterpret the Mondrian classical feel, but to apply it to modern day, the planners say.

The project started with an architectural maquette, or model, developed five months prior.

The venue itself was "dark and dreary," and the Mondrian-patterned fabrics installed on every wall of both lobby and main event areas were the perfect answer.

Bright blue carpet is installed over the existing brown carpet.

A view of a lounge area.

A "cloud" covers a gaudy chandelier in the event space.

"Our biggest issue was the truss structure on the ceiling covered with the same patterned wall fabrics," MB says.

"Seeing as this structure had to be movable up and down, it needed to be rigged on 1 ton motors, so during install we were able to determine what needed adjustments. Indeed we had a major glitch! This ‘cloud’ hoisted over the floor, measured 55 by 33 by 6 feet. It was originally designed as such, so that it would cover a very gaudy chandelier that existed in the venue and allowed us to drop the ceiling heights by 6 feet to diffuse the volume of the room. This allowed us to install projectors and lighting equipment that would be camouflaged by the fabric."

"With our first attempt to cover the structure, we noticed that the fabric was not sewn to proper specifications. It was too wide! We had to send it back mid-day, and received it at midnight, remaining throughout the night, to reinstall. Success at 8 a.m.!"

A closer view of the "cloud."

The overhead structure also helped rein in the massive space.

All tables are color-blocked.

Another view of dining tables.

"Since the plexi scratched easily and nothing was holding the plexi to the frames we had to adapt and use double-sided tape to keep things safe," MB says.

Custom-printed coasters for the water goblets feature a the flip side describing the background of Piet Mondrian.

A huge 36-foot red bar is installed and a multi-tiered staging was created with each piece, covered in a color of the Mondrian concept; yellow, red, blue and white.

In the middle of the dance floor are six banquet rolling plexi carts, lit in white and showcasing the sushi displayed on colored trays, mixed with containers of red and black “Chorks" (part chopstick, part fork) amidst towers of colored napkins and small plates for grab and go.

Entertainers wear dresses and shoes enhanced with the colors and print of Mondrian.

A salute to the mitzvah boy. 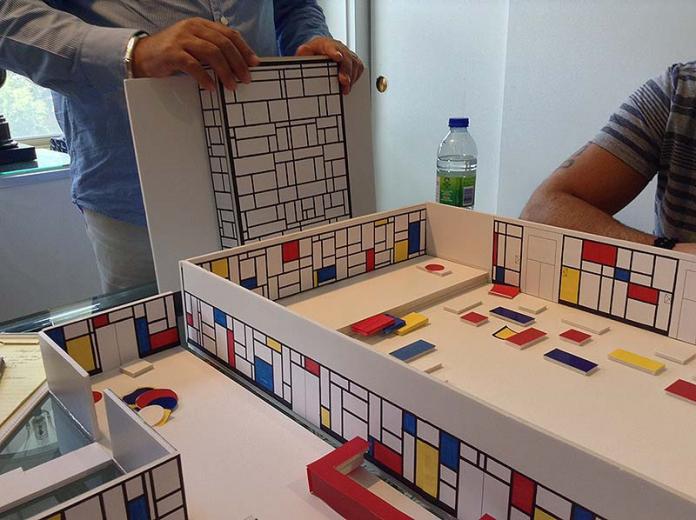 Next Up
It's a Circus in Here: One Events Creates a Circus-theme Bat Mitzvah
Start Slideshow ›