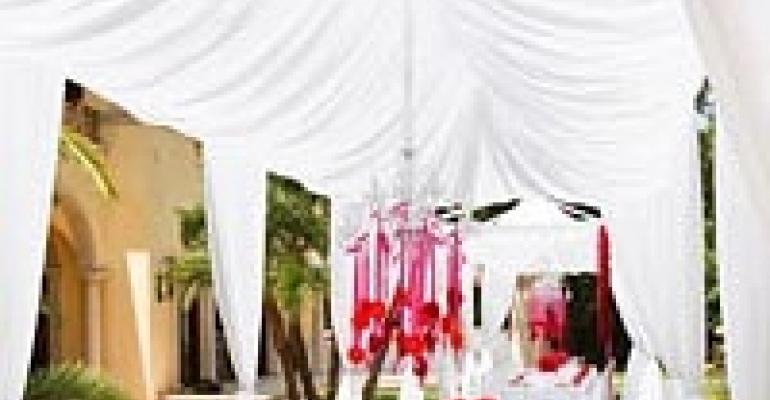 When creating a birthday party for two sisters turning 5 and 8, Los Angeles-based event planner Sonia Sharma looked to the toy box for inspiration. Because the event included adults, too, “We wanted to keep the party elegant while still catering to the children,” Sharma says. “And since the children were young, we wanted to connect something from their playtime to the party theme.” With that in mind, Sharma and her team, which included L.A. floral designer The Empty Vase, found their muse in the beloved board game “Candy Land.”

However, re-creating Queen Frostine and Gramma Nut was definitely not on the design agenda. “We were inspired by the game, but did not try to re-create specific items from it,” Sharma explains. Instead, in keeping with her client's request to combine fanciful with fancy, Sharma looked to the game's candy-coated color palette, specifically fuchsia, red and orange — along with the ubiquitous lollipop — as her guiding design elements.

Gerbera daisies, a whimsical flower if there ever was one, were the primary blooms used for the decor, which included two giant, free-standing foam board lollipops covered with jewel-embellished daisies. Jeweled daisies also appeared in tall buffet arrangements at the food stations, which featured daisies plus hydrangeas in clear, cylindrical vases. More daisies appeared to float inside the vases, a trick accomplished by stringing the flowers with wire and securing them to the bottom of the vases with weights.

Two long dining tables — one for the kids and one for the adults — were set up under custom-made white-draped cabanas and featured simple white boxes brimming with bright red and fuchsia daisies. Dining tables were covered with white linens accented with custom-made red and fuchsia silk dupioni napkins created by Resource One, which also made matching silk dupioni pillowcases for the lounge area.

Elegant crystal chandeliers were given playful panache with more jeweled daisies dangling from fuchsia ribbons. Guests sat in white chiavari chairs, while the birthday girls' seats were designated by clear chiavaris adorned with their initials in red and fuchsia daisies.