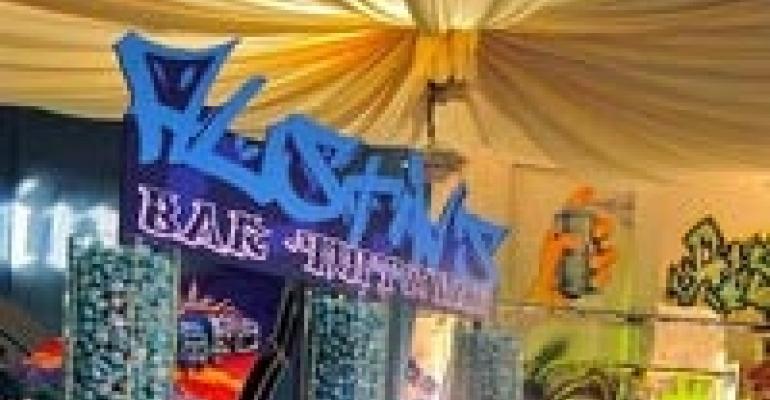 Children's Events Depend on the Attraction of Interaction

If they can animate it, operate it, surf it, play it or help themselves to it, it's likely young event guests will eat it up.

The thing about trends is that they come and go — and notoriously among tweens and teens, those famously fickle arbiters of what's cool when. What's the one trend that's become so entrenched that it's essential to any event where young guests are in attendance? Interactivity. Ask event pros anywhere and they'll tell you: From the moment guests enter the venue to the moment they leave, hands-on is a must-have at youth parties.

Kids and candy. They go together like … well, kids and candy. It's hard to imagine young event guests not responding with shrieks of excitement to the unveiling of a killer, hands-on candy buffet as the party draws to a close. Especially when it features images of the guest of honor immortalized on cupcakes in fondant icing, or lollipop trees bursting with lick-able blooms. These custom treats are just a couple of the signature features of a Hollywood Candy Girls candy buffet.

Sorkin says that her relationships with major candy manufacturers give her access to hot new products — “stuff that's cool, tastes amazing, has insane wow factor and” — a plus for paying parents — “is relatively budget-friendly for the average customer.” And about those parents … while young guests naturally gravitate toward any offer of all-you-can-eat sweets, for free, often “adults get even more excited that the kids do,” Sorkin says.

Company owner Simon Miller worked on digital event sign-in technology for two years, experimenting with smartboards and other touch screens before landing on Apple's iPad to create the iSign guestbook. Flush-mounted on the bezel of a custom metal truss podium, the battery-powered iSign stands at a height that's low enough for kids but comfy for taller guests, too. Arriving guests sign in, using stylus and software options to add a personal touch-screen touch or two, and then their messages are displayed on a tethered big screen for fellow revelers to see. “For the larger screen, we use our proprietary LCD screen enclosures that are made from diamond-plate chrome,” Miller explains.

Miller and his team can create digital iSign backgrounds to match any theme imaginable. Summer camp logos, pix of pals and sports teammates, palettes or thematic symbols — you name it and the Simon Elliot Events crew has probably digitized it into an iSign background. The iSign podium is customizable, too. For a recent basketball-theme event, Miller turned the iPad podium surface into a basketball and the display screen into the backboard. “The options are limitless,” he says.

A big hit at bar and bat mitzvah bashes and Sweet 16s, the iSign “incorporates many technologies that are at the heart of today's culture,” Miller says. “Our young guests are so enthralled with technology, whether on the web or their cellphones, the iSign is a mere extension of what to them is already so natural.”

Sure, photo booths have been a kid-event staple for ages. But it took an L.A.-based fashion photographer to take the beloved booth to the next level. Cliques Photo Booth replaces the green-screen, self-operated, behind-the-curtain photo booth with a “compact, full-service, professionally lit, mobile photo studio that comes with a choice of themed photo-realistic backdrops, costumes and props,” explains company founder Dov Viramontes. And, he adds, “We have charming, good-looking college graduates with degrees in arts and theater to interact with the guests.”

Party-goers simply pick out their add-ons, take their place in front of the camera and smile. Guests can not only get their photos immediately but also download them from the Cliques website the following day, just in time to post and tag on Facebook before Monday's school bell rings and the gossip mill starts turning.

“We make the guests feel like they are ready for their close-ups or for being photographed by paparazzi for ‘People’ magazine,” Viramontes says, a sensation event-goers especially savor in L.A., where “everyone likes to feel like a star.”

Gamin' Ride CEO Michael Falgares describes his 38-foot-long, 24-screaming-kid-capacity vehicle as a mobile video game theater. But that doesn't quite do justice to the interactive thrill Gamin' Ride brings when it rolls up to a birthday party, bar mitzvah or quinceanera. Inside the Gamin' Ride, guests will find four massive flat-screen TVs equipped with Xbox, PS3 and Wii consoles. Lest any sense be left unstimulated, the unit also features smell-a-vision technology that lets players smell the environment of the game they are playing, and responsive-vibration seating that makes them feel like they're right in the middle of the action.

The more feminine Glamour Ride rig features spa treatments, mini-makeovers and karaoke. And while kids are going gaga over the latest video game technology or super-cute mani-pedi, adult guests can watch the action going on inside the trailer via online live feed.

To personalize the experience, Falgares and his staff produce custom photo frames and keychains onboard the ride for guests to take home. The team also can screen a custom slide show featuring the guest of honor in a starring role. Speaking of which … the side door to the Glamour Ride has a star on it customized with the honoree's name, natch.