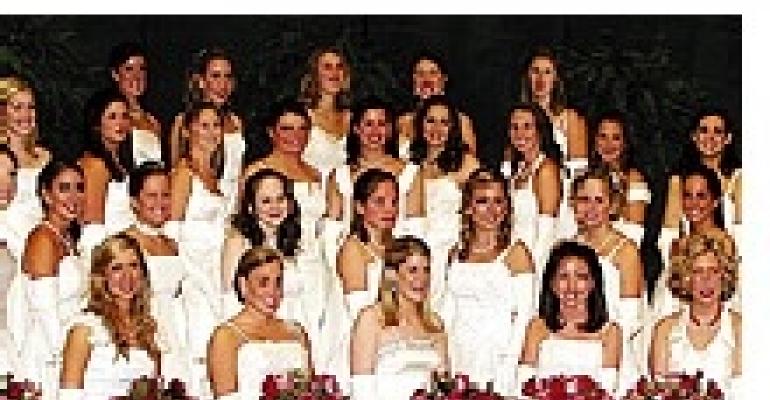 Debutantes still having a ball

MTV may grab headlines with its profiles of outrageous "super sweet 16" parties, but demure debutantes still have plenty to celebrate. Debutante balls, originally intended to introduce girls dressed in fancy white gowns to society, are still going strong, now often raising funds for charity too. Most debutante balls take place during the Thanksgiving or Christmas holiday seasons when the young ladies, who are typically freshmen or sophomores in college, return home from school.


An evening as carefully orchestrated as a debutante ball requires a similarly thought-out menu, balancing tradition and trends.


While the girls in New Orleans practice their curtsies, the Adam's Mark Hotel Saint Louis practices its menu. The hotel services the Roman Catholic Fleur de Lis Ball, where the girls are presented to the archbishop, and the Veiled Prophet Ball, a 1,200-guest event more than a century old. Marianne Rogers, catering sales manager for the hotel, says her team typically holds six menu tastings for every ball, and since many girls are in both balls, the same menu can't be repeated. To be prepared, the chef begins planning the menu for the following year as soon as the balls--which take place within a week of each other--end, with ball committee members sampling the menu and offering suggestions.


For the full story, see the October issue of Special Events Magazine or click here