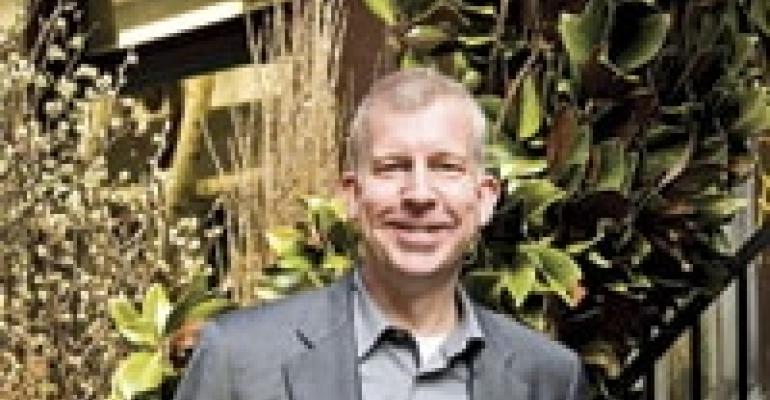 When David Beahm discusses his entry into event design, he says, “It was just meant to be.” His mother was an artist, his father was in the hotel business, his godfather was a florist, and Beahm started as an opera singer. In time, event design proved a natural fit.

In 1998, Beahm founded New York-based David Beahm Design, which now includes 10 fulltime staffers serving both social and corporate clients. The company is the force behind such high-profile affairs as the 2000 wedding of actor Michael Douglas to actress Catherine Zeta-Jones.

SPECIAL EVENTS MAGAZINE: You're no stranger to celebrity weddings. Can you describe a favorite element of one you've worked on?

DAVID BEAHM: One of the favorite things I've ever done was for Michael Douglas' wedding, reconstructing a live tree indoors and hanging escort cards from it. It was a huge magnolia tree, and it was exploding with white French tulips.

SPECIAL EVENTS: Are there times when you feel a bride's direction is problematic?

BEAHM: I work very hard to give brides their dream and not what I have in the basement. But there are times when I just can't tolerate it. I have no trouble saying “no” when I'm going down a taste path. I work really hard to do custom, but it's also my name on the wedding. It's a really hard balancing act, but they have to trust us.

SPECIAL EVENTS: Are you designing events differently than you did a year ago?

BEAHM: We're working harder for less money. Across the board, especially when it comes to corporate events, people need more hand-holding — no one is writing the check anymore. It really affects our level of service and turnaround. We do PowerPoint presentations for everyone now — even brides.

People are afraid to spend money, and they need to be encouraged more and know they are doing the right thing. We end up having to do more work to, No. 1, convince them to spend the money, and No. 2, make them feel better about spending the money. That ultimately leads to more presentations and more samplings, so it ends up being more office time.

SPECIAL EVENTS: How do you expect the tough economy to affect wedding design in 2009?

BEAHM: The money is there. But people are really scared to be seen spending it. It's all about appearances; it has always been about appearances. It's not that you can't spend as much money — you just can't be as flamboyant.

I think all event people need to think about stealth spending. It's our job to do smaller, more luxurious parties with [the host's] friends who won't talk about it. The luxury is in the details. So it's helping them keep the luxury in and maybe spending the same amount of money without looking like they're spending a lot of money.

SPECIAL EVENTS: What's an example of someone spending on items that aren't obviously pricey?

BEAHM: People know money is being spent on an item like caviar. But if they don't know fabrics, then they're not going to roll their eyes.

SPECIAL EVENTS: Do you have any go-to decor substitutions for people who can't afford to go all out?

BEAHM: Instead of doing an all-rose arrangement, you can do hydrangea and roses. The bigger the flower, the more visual volume — that helps you reduce the stem count. Sometimes we have to let that bottom line go just to get the business.

SPECIAL EVENTS: What wedding trends do you see on the horizon?

BEAHM: In 2009, we'll be spending more time with the bride's father. Weddings will become quieter and more conservative. I think more people will go for the traditional white wedding — they won't go out of the box.

BEAHM: It's always the father of the bride who says, “Do we need to spend all that money on lighting?” And that's when I walk over and take the [lighting] plug out of the wall — and they will always get the lighting. General ballroom lighting does no favors to anyone. Lighting is a very important complement to your investment. If you're going to invest in all these flowers and decor and you don't light it, then why do the investment?