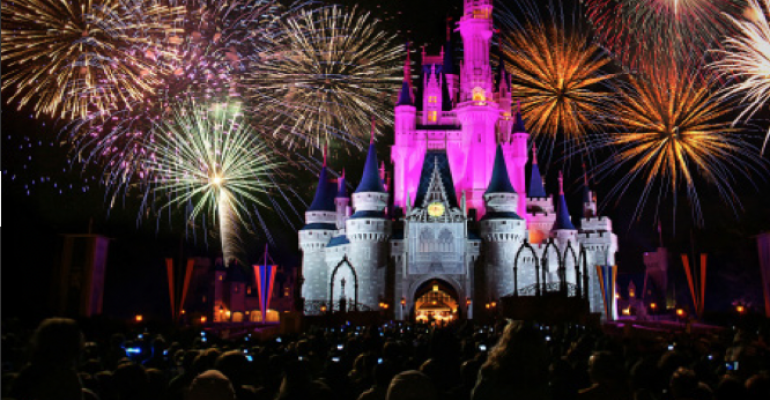 The idea of Disney®-themed events is nothing new. Princess birthday parties, Under the Sea beach-themed weddings—we have seen them all. More than whimsical décor and enchanting music, however, the Disney aesthetic—that is, the guest and employee experience—is legendary.

“I don’t work for Disney, Disney works for me,” says Michael Kloss, author of Five Days with the Mouse to be a Better Event Planner. “Disney gives me my inspiration.”

This year’s Catersource + The Special Event offered a duo of Disney-specific sessions—Five Days with the Mouse (Kloss) and Meet like a Mouse (Lenn Millbower)—where conference delegates received a behind-the-scenes peek at what has made Walt Disney World® Resort in Florida and Disneyland® Resort in California two of the happiest places on earth for decades.

“This is not about Disney-fying your event,” Kloss said. “It is about improving our guest experience by learning from Disney.”

Kloss stresses that there are incremental changes and additions you can make to evoke the same joy, excitement, and magic that Disney provides to its guests.

When traveling to one of Disney’s parks, specifically Walt Disney World, guests are immersed inside a “Disney bubble” as soon as they get off the plane: their airport transportation, the music in the hotel lobby, room décor, and even the shape of their waffles in the morning.

“When they build that bubble you are brought into that ecosystem—everything you do, everything you breathe is part of that experience,” Kloss says.

There are a number of different ways to bring that same immersive guest experience into your events through easy additions.

When thinking about an immersive guest experience, the importance of first impressions can’t be underestimated. If your event has a block of hotel rooms reserved for guests, include signage in the lobby welcoming them to your event, or supply in-room branded amenities. If you’re providing transportation to and from your event, consider having someone on board to hype the event, build anticipation, and answer questions.

“If you’re working with a venue, find out what that first touchpoint is so you can personalize it for your guests,” Kloss said. “That first impression is everything, and everything should be part of the experience.”

When attending an event, guests should feel transported. They should leave the stresses of everyday life behind, and instead should focus on the here and now.

“Guests should feel as if they are part of another world,” Kloss said. “By transforming the environment, you can take people to another level.”

Ushering guests into your event can be done with something as simple as mood lighting, or something as elaborate as over-the-top décor.

When transforming the space however, it’s important to take into consideration elements such as sight lines, lighting, and sound to ensure that guests remain in the moment. For example, if a side door is propped open and guests can hear venue staff bustling around, that detracts from the experience. If the stage for a performance isn’t properly draped, visible equipment and piles of costumes can be an eyesore.

“You want to keep people in an environment and not have their minds wander out of the story,” Kloss said. “You need to identify how to create that kind of hyper-focused attention.”

Having a clear definition of your event’s message is one of the most important elements because it not only unifies the experience, but it also re-enforces the reason why guests are there. Disney, if designing your event, would pick one emotional theme and align everything to that theme. It’s not a case where you would create a linear story. Rather it’s one where you thrust people into your theme.

“If you go to an event without a message, it’s simply the same people in a room eating food,” Kloss said.

For example, let’s say there was an after-hours event in the Africa section of Disney’s Animal Kingdom® Theme Park. Beyond the obvious themed surroundings, the party would feature African entertainers, music, food, photo locations, face painting, and giveaways.

“You really have to sensify everything when it comes to messaging,” Millbower said. “It’s not an intrusion, just a part of the experience.”

Consider cadence, too. “Think about Disney’s fireworks: there are moments of fire and fury where the world seems to be collapsing around you, and then there’s Tinkerbell flying through the sky and suddenly the room changes,” Kloss said. “Beating the same drum at the same volume makes you want to just cover your ears; rather, the presentation should be taking you on an emotional roller coaster.”

The importance of cast and costuming

There’s a reason why employees at Disney’s parks are called cast members, regardless of whether they are costumed, and that’s because they are telling Disney’s story.

The same should be true for your events. Regardless of who it is—planner, server, bartender, busser, cook—everyone should be dedicated to telling the event’s message.

“The moment you stop treating everyone associated with the event—from the greeter at the door to the staff in the AV booth to the front desk—as people who are part of telling the story,” Kloss said, “you are missing out on the opportunity to have so many more voices in that story.” This idea can be evidenced through Disney’s “Performance Theming.” Whether it is the gloomy ghost host at the Haunted Mansion® attraction or the happy bell ringer at the Harbor House Restaurant, the cast members know the “show” they are performing in and theme their behaviors, dialogue, and attire to deliver their “role.”

Having a proper transition in and out of an event can also help with the immersive experience.

“You can’t take somebody cold from the lobby of a hotel and walk into a winter wonderland—it’s too jarring,” Kloss said. “You need a palate cleanser that lets you leave what is behind and enter what is new without it being such a jarring transition.

“The transition point draws you into the new world and helps you clear your mind of where you were before.”

Catersource + The Special Event is going to Disneyland!

Registration is now open for Catersource + The Special Event co-located conference in Anaheim, CA, May 2–5, 2022. Go to www.thespecialeventshow.com for more information and www.specialevents.com for updates on speakers, sessions and events.

One example of this is at the Magic Kingdom® Theme Park, where a tunnel connects the Star Wars area of the park with a neighboring area themed with Toy Story and the Muppets.  While the tunnel itself isn’t themed or decorated, the blank canvas helps visitors decompress from one area of the park to the other.

Transitions are not only important for transitioning from one space to the next, but they’re also important for marking the event beginning and end.

While the nightly fireworks display marks the official closing of the day, the park itself doesn’t close for almost another hour. You may not be able to go on any more rides, but you are free to enjoy your family’s company, take some additional pictures, and ease your way out of the experience. The same idea can be applied to events by simply ending it in the same way “last call” works at a bar.

“You can still make it very clear that it’s going to look like the end of the event,” Kloss said, “but nobody should be kicking guests out the door.”

It’s all about instinct.

One of the most famous words in the Disney lexicon is “weenies,” which are essentially the visual elements that guests are instinctively drawn to, such as the castle at the Magic Kingdom. When Walt (whose birthday is coming up on December 5th) was developing Disneyland in the early 1950s he would frequently arrive home late in the evenings, entering through the kitchen to see what Thelma, his housekeeper, was preparing for dinner. He would sometimes grab a “weenie” from the refrigerator as he made his way through the kitchen and share it with his dog, Lady.

He realized that she would follow him wherever he went when he was holding the hot dog because she knew he was going to share it with her. So, while developing the new theme park Walt remembered that he could lead the dog wherever he wanted with a “weenie.” This became the term he coined for describing to his Imagineers how to get the guests to go to certain places and directions.

This concept is also familiar to event planners when designing a room layout. One of the most common “weenies” at any event is clearly the bar, where guests tend to gravitate as soon as they enter a venue.

“The guests instinctively know where to go and they do it,” Kloss said. “They don’t need signage, they don’t need a wayfinder, you don’t need to push people or to herd cats.”

In a similar vein, by incorporating “weenies,” or other eye-catching elements into your event, you can encourage your guests to move forward and through your experience.

“Details that distract from the experience detract from its emotional resonance. The reason Disney theme parks work so well is intentionality,” Millbower says. “Every detail, no matter how small, is specifically aligned to produce and reinforce the emotional meaning of the scene. That’s a concept that is easily transferable to a meeting. Whether it is nondescript table decorations, open doors to the kitchen, or music that does not reinforce the theme, all of it matters.

“If Walt was planning your event, what would it look like?”