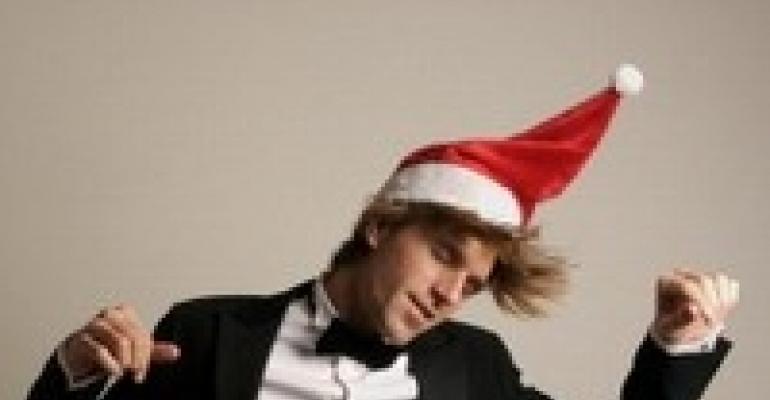 News about a potential recession triggered by the U.S. housing slump hasn't made it to corporate party-planning committees. A survey released last month by New York-based outplacement firm Challenger, Gray & Christmas found that 90 percent of companies still plan to hold holiday parties this year and nearly 40 percent of those are boosting the party budget.

"The tumultuous economy has not only failed to dampen spirits," Challenger said in a statement, "it actually appears to have prompted more companies to plan events. The 90 percent planning parties this year represents an increase from 79 percent in 2006." The findings come from the annual holiday party survey conducted among 100 human resource executives.

“Companies may be throwing caution to the wind in anticipation of a slowdown in 2008," said company CEO John A. Challenger. "Or, it may be that the troubles in the housing and financial sectors have remained relatively isolated and outside of home building and mortgage lending, there is good reason to celebrate."

Among the 38 percent of companies increasing their party budgets, the average increase reported was 16 percent. Fifty percent of companies are allocating the same amount of money as last year. Even among the 12 percent planning to reduce party spending, the budget cuts averaged just 5 percent.

Not all segments plan to party hearty. "In addition to the construction and real estate industries, the automotive sector continues to struggle," Challenger said. "Meanwhile, Wall Street firms can undoubtedly afford to hold lavish parties, but it might be viewed as unseemly, considering they have suffered billions in losses tied to bad bets on high-risk mortgages--losses which have thus far resulted in thousands of job cuts.”

“Seven years after the peak of the dot.com bubble, we are still seeing the tech sector’s influence on holiday parties," Challenger added. "The dot.com firms really set the bar high when it came to celebrating the end of a year’s hard work. After the collapse, companies that survived were unable or unwilling to put on the extraordinary events of the past. We have seen a tech-sector resurgence over the last couple of years and a return to the types of infamous parties that set the standard back in the late 1990s."

He added, “We would need to see a catastrophic downturn in the economy to halt party spending entirely. They have become part of the nationwide workplace culture. From the smallest firm to the largest global conglomerates, holiday parties have become the way to celebrate a good year, show employees how much their hard work is appreciated and attract new workers.”

One significant change in this year’s survey was that fewer companies are willing to provide free access to alcohol. Less than half (46 percent) of those surveyed said their companies planned to provide alcohol, down from 60 percent a year ago.

Nearly three out of four employers (73 percent) plan to hold their parties off company premises, and 69 percent are using some type of event planner or caterer.

“The fact that employers seem willing to spend the extra money on off-site parties and caterers and the fact that fewer are serving alcohol appear to be driven by concerns over corporate responsibility and liability as opposed to cost," Challenger said.