View Our Webinars!
Featured
Mouthwatering Menu Trends for the New Year
Apr 19, 2021
What You Need to Know About the Wedding Boom and How It's Impacting the Industry
Sep 14, 2021
Vanquish the Villains on Your Entrepreneur Hero's Journey
Sep 13, 2021
Time's Running Out to Speak at Catersource + The Special Event!
Sep 10, 2021
Special Events
brought to you by 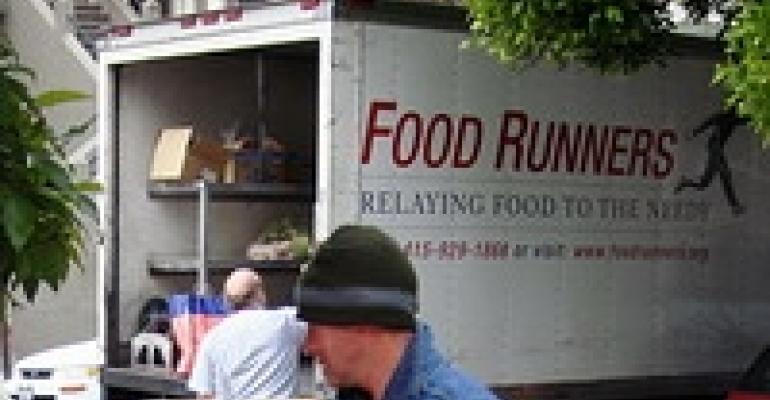 the good news Food Runners, a service that picks up excess food from catered events and restaurants to share with the hungry

Mary Risley, head of San Francisco's esteemed Tante Marie's Cooking School, was frustrated at seeing perfectly good food tossed into the trash. In 1987, she founded Food Runners, which picks up surplus food for use by shelters. Today, the agency delivers 10 tons of food from some 200 donors, including high-end caterers such as McCall's and Paula LeDuc, to more than 450 local food programs. The team picked up some 200 pounds of food from San Francisco's Bay to Breakers footrace on Sunday. They are prepping to pick up surplus from the legendary Black and White Ball on Saturday, where they expect to rescue about 1,000 pounds of food, a Food Runners spokesman predicts.

Moved by the continuing struggle of New Orleans to rebuild after Hurricane Katrina, which hit in 2005, New York-based Patron Spirits Co. designed a program in 2008 to raise money and generate awareness of the work still to be done. The company used the Patron Tequila Express—a refurbished 1927 railcar that has transported luminaries including Franklin D. Roosevelt and Clark Gable—for a 10-city tour. As the fifth anniversary of Katrina comes this fall, Patron is taking the railcar out again, for the Patron Epicurean Express. Over the summer, the team will raise funds in various cities by selling a limited number of seats for intimate cocktail parties and dinners aboard the train, which will be hosted by renowned chefs. "Patron was founded by John Paul DeJoria," explains Patron spokesman Hunter Heres, "a man who lives by the mantra 'success unshared is failure.' So we're constantly aware of the importance of having a close relationship with the community."

Due in part to the fact that both parents of Microsoft founder Bill Gates were staunch supporters of the United Way, the huge software company makes a huge commitment to the agency, notes Microsoft events manager Janna Harala. During the month-long Employee Giving Campaign, held each fall, the Microsoft campuses feature a themed day with booths, food and beverage, games and activities for employees. In 2009, the combined employee donations and company match hit nearly $88 million. The program makes Microsoft "The No. 1 per capital corporate giving program among major U.S. corporations," Harala says.

the good news Shobiz adopts the S.P.J. Sadhana School, a training center for children and young adults with special needs

Shobiz, an event agency based in Mumbai, has for the last four years supported the Sadhana School, both with donations and event support. In 2007 and 2008, for example, the Shobiz team oversaw production of the school's concert, where students showcase their dancing, singing and handicrafts. Last year, Shobiz created a press conference to boost fundraising, and in March, the team aided the school's graduation ceremony, at which India's past president was a guest. Says Shobiz CEO Sameer Tobaccowala, "Shobiz believes in maintaining the earth's cycle of goodwill and humanity, and giving this world back its most deserved joy and peace in our own small ways."

the good news The Good News paper, a weekly e-newsletter filled with nothing but good news, such as uplifting human interest stories and humor

Andrea Michaels, founder of Sherman Oaks, Calif.-based Extraordinary Events, launched the newsletter last January after watching a TV news program with "nothing but bad news." The subscriber list has grown "dramatically," she notes, adding, "At every trade show I attend—and I attend many—I am stopped by friends and strangers thanking me for this." Is it hard to find items to cover every week? No, Michaels says: "We have more material than we could ever publish. Good news is all around us if you look for it."

Have Fun, Do Good: Events with a Social Conscience

What You Need to Know About the Wedding Boom and How It's Impacting the Industry
Sep 14, 2021