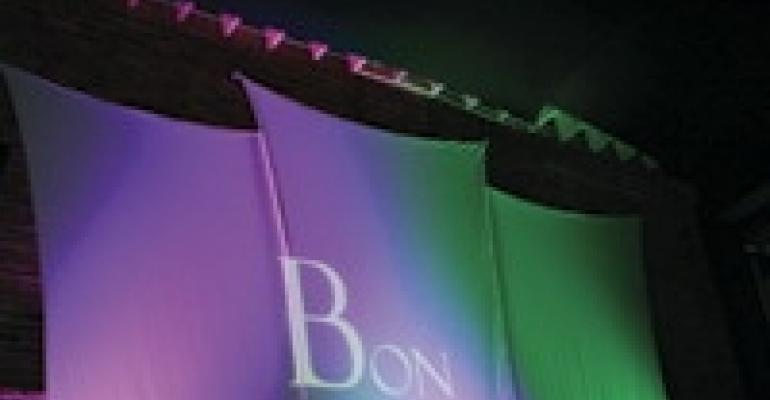 Strategic Group Lights Up the Night for Absolut

The flashing lights coming from the e-mail invitations to hip-hop artist Kanye West's “Glow in the Dark Tour” after-parties let invitees know exactly what they were in for. New York-based Strategic Group Production treated an eclectic mix of “influencers and taste-makers” to parties that lit up the night and threw the spotlight on event sponsor Absolut 100 vodka.

The energy of the A-list artist's U.S. tour set the pace for the Strategic team, who had only two months to create a series of after-parties that spanned 15 cities from April through June. After taking a peek at West's act, the event team noted that the “show's lighting pulsed with the energy of the music,” says Samantha Walker, Strategic's head of events. As a result, the team focused on lighting at the after-parties. And lighting was key to helping the all-black Absolut 100 bottle make a statement. Calling the dramatic bottle “the real muse” of the campaign, Walker and team brought it to life by building light around and behind it at the events.

At each party, LEDs on the Absolut-branded DJ booths splashed neon shades of green, blue, purple and yellow onto the event spaces, growing in intensity as the parties gained momentum. “At the beginning, the lighting was more subtle but built up as the night went on,” Walker says. “The lights reminded me of the [1980s battery-operated] ‘Simon’ game — they were always changing.”

Using its nationwide resources plus direction from Absolut, Strategic chose venues that were on-trend and drew local attention, such as Los Angeles' Goa nightclub, Chicago's BonV and New York's 1 Oak. Top DJs from each city mixed songs of their choice, with some creative direction from the event team, because “they know their audiences and what they like best,” Walker says.

Perched high on custom-branded boxes and spotlighted by a swirl of rainbow-colored lights, go-go dancers were highlights of the evening. The dancers wore cutting-edge costumes created expressly for the events, underscoring the fact that the stylish West “is a fashion icon,” Walker says. The DJs, spinning a mix of high-energy dance songs, beckoned revelers to the dance floor — or whatever surface they could tap their feet on. “You couldn't at times help but dance,” Walker says. “In venues where there weren't dance floors, guests were dancing on tables — wherever they could find space.”

Menus varied from city to city, capturing the flavor of each locale. Partygoers in New York munched on hearty mini burgers, grilled cheese sandwiches and fingerling potatoes, while guests were treated to ahi tuna tartare, steak skewers and veggie rolls in health-conscious L.A. Etched plexiglass bar menus, which were embedded with black lights that were invisible until they were lit, showcased the events' four exclusive Absolut 100 cocktails. Libations included the “Absolut Gold Digger” — a nod to West's No. 1 hit song — which combined Absolut with apple juice and champagne.

Strategic met its goal of drawing crowds of 300 to 500 guests in each market, and even more in some cities. “Along with the Absolut brand team, we collectively agreed that success would come when the DJs fed off the energy of the crowd and vice versa — the bartenders danced while mixing cocktails — and a line had formed around the block,” Walker says. “We knew we had exceeded our wildest expectations when Kanye himself showed up at nearly every event.”