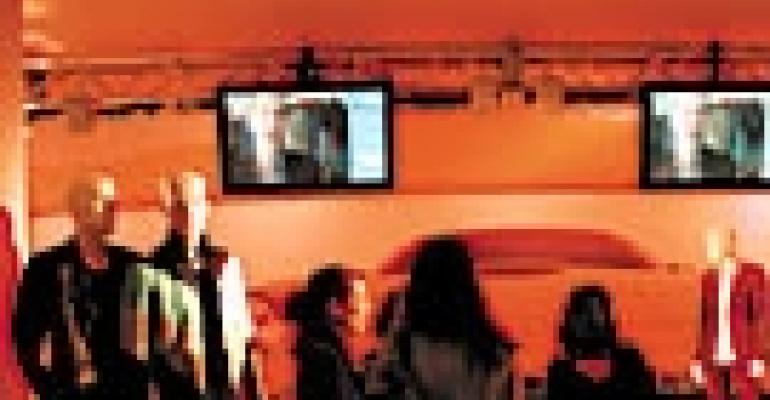 PALM PILOTS AND plasma screens aren't going away. Indeed, high-tech tools have been a boon to special events, boosting efficiency and deepening impact.

But the trend in corporate events today is a focus on personal interaction. Often keying on themes that evoke the friendly and familiar, corporate event professionals are using events to build bonds, both with products and with people.

Standout technology still packs a punch. For example, at its user conference at a Las Vegas hotel in February, CAD CAM software developer SolidWorks demonstrated its commitment to innovation by using “motion capture” technology during its opening general session — the first time the technology has been used for a corporate event, the producers say.

Concord, Mass.-based SolidWorks partnered with marketing communications firm Cramer, based in Norwood, Mass., to track the performance of cirque-style dancers live on stage via computer cameras, projecting their stylized images behind them on 16-by-20-foot screens. For the 1,700 users in attendance — primarily high-level engineers, designers and managers — “associating the cutting-edge technology with SolidWorks reinforced SolidWorks' image as an innovator and added a level of excitement to the event,” notes Cramer marketing director Jill Petrie.

Even so, the growing trend is not to dazzle with technology for its own sake, but to use it to make an emotional connection.

Research showed Ford and advertising agency J. Walter Thompson, both in Detroit, that consumers regard the Thunderbird as a fashion statement. So the campaign team, which included fashion publishing powerhouse Conde Nast, keyed on a fashion theme, engaging top-flight designers including Carolina Herrera and Marc Jacobs to design clothing inspired by the car.

The five new car models were showcased in custom-colored environments, including bars featuring the car's signature “porthole” design element, serving color-keyed cocktails. New York-based EyeMag Media created a video of the designers telling how the car inspired them, which played on four plasma screens. The highlight of the event was the reveal of a Thunderbird painted in a pattern created by designer Diane von Furstenberg, who posed with the car.

The event fueled Thunderbird sales: After a follow-up article in the New York Post, “dealerships up and down the East Coast were overrun with phone calls with people trying to buy one,” says Miles Johnson, Ford public affairs manager. “The dealership in Manhattan had to bring in extra receptionists.”

Besides creating bonds with products, special events today create bonds between people. This was the goal of a December event staged by Disney Channel, based in Burbank, Calif. “One of our brand promises is to create an emotional connection to kids' lives,” explains Vycki Smaldino, vice president of brand services for ABC Cable Networks Group, of which Disney Channel is a division. “And in this case, we wanted to make that connection with our guests.”

To commemorate its donation of programming to the Museum of Television & Radio in Beverly Hills, Calif., Disney Channel staged a holiday party at the museum, inviting members of the media along with Disney performers and corporate executives and their children. Culver City, Calif.-based Progressive Events created an understated holiday look for the 200 guests with white poinsettias and 12-foot silver birches decorated with clear lights. One wall of the museum featured a deep blue background against which moving gobos created “snowflakes.”

The holiday theme neatly underscored the theme of gift-giving, and created an ideal platform to showcase to the media the company's contribution to the museum, according to Disney Channel marketing director Chris Lacroix. “Disney Channel has certainly turned a corner in the last five years,” he says. “Our programming is getting a lot more attention, and it was time to preserve it.”

In a similar vein, financial services giant John Hancock used the powerful pull of the familiar to build bonds within the local community.

The sole goal behind a party thrown in January by Boston-based John Hancock Financial Services for the new owners of the Red Sox baseball team was to bring the city together. “The bidding process was really divisive,” notes senior vice president of corporate communications Stephen Burgay. “But it was over, someone won, and our president felt it was a good thing for us to get everyone together.” The firm is in the perfect position to play host: John Hancock is a corporate sponsor of Major League Baseball and a fixture on the Boston scene.

He knew the event was a hit, Burgay says, not only because “people talked about it for weeks, but we also heard that it was a great opportunity for the community to get together.”

DAYS OF OUR LIVES

The event team behind an awards gala last January used a theme of shared history to build an emotional bridge between the two newly merged banks forming TD Canada Trust.

At the Fairmont Hotel Vancouver, in Vancouver, British Columbia, nearly 200 guests sat down to place settings featuring silver chargers with a clock face inset, underscoring the event's “time” theme. Alternating with awards presentations were video highlights of news events, television programs and milestones of each bank from the '60s through the '90s, introduced by bank executives in period dress.

The time theme helped to “recognize all of the past history from both companies to merge the corporate cultures,” explains Barb Stangoe, branch manager for TD Canada Trust. But the evening's overriding goal was to recognize the superior work of employees. “People get really pumped up and take that enthusiasm back with them to the branch. It builds on itself.”

The passage of each decade was underscored by a dramatic lighting change that washed over the entire room. During dessert — presented on an ice plate decorated with the new company's logo — the company president again took the stage to predict a positive future for the newly merged organization. Notes hotel conference services and catering manager Alan Ferris, CMP, “For guests, it was their time to shine.”

See this story on the Web at www.specialevents.com.

WHAT COUNTS IN CORPORATE EVENTS

EIGHT IN TEN RESPONDENTS SAY THEY TRY TO MEASURE ROI, return on investment, for their special events. Most rely on a combination of surveys, media hits and sales results.

THE DESIRE TO MARKET PRODUCT TO CUSTOMERS is the trend having the biggest impact on special events, followed by (in order) the desire to educate employees; the individual company's financial situation and post-9/11 sentiments (tie); the desire to boost employee morale and the desire to thank customers (tie); and the sluggish economy.

Note: Results are based upon an informal survey and are not statistically valid.