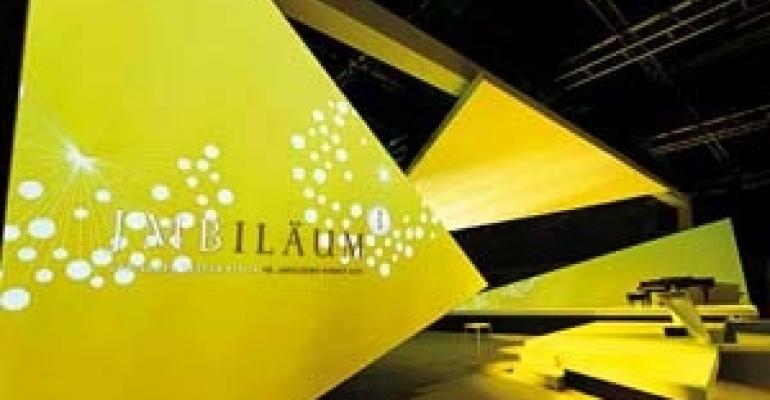 For the 10th anniversary of the Jewish Museum in Berlin, a fundraiser for 900 guests last October, Vok Dams Group created a temporary venue on the construction site of the museum's new addition.

The event team developed large, asymmetrical projection screens that not only echoed the famous profile of the museum—a stylized Star of David—but also suggested an X--the Roman numeral for 10.

DPEM Event Marketing helped NASDAQ mark 20 years in Silicon Valley with a celebration for 200 at Cantor Arts Center in Palo Alto, Calif., in 2010.

"The concept was that NASDAQ has created a flow of information that feeds and levitates a community of people like the lifeblood moving through a central nervous systems of a living thing," explains DPEM founder Dominic Phillips.

The event team brought the theme to life with an event in a clear, modern tent overlooking a museum with its façade beautifully lit, referencing "the stability, strength and status of NASDAQ," he adds.

For her 30th wedding anniversary, event planner Valerie Ulrich teamed with Blueprint Studios last September to create the "100 Year Celebration" at the Westin St. Francis Hotel in San Francisco, a nod to her husband's 70th birthday as well as their anniversary.

The event was three parties in one, with cocktails in one room, a seated dinner in another, then back to the first for dessert in supper-club setting.

The executive chef at the St. Francis is the same person who prepared Ulrich's wedding dinner in Honolulu 30 years ago.

In advance of Super Bowl XL, held in Detroit in 2006, the entire National Football League season was themed "The Road to Forty."

"My favorite element from the event itself was the tableau presented when the Pittsburgh Steelers and Seattle Seahawks ran onto the field through a gantlet of nearly every one of the past Super Bowl MVPs like Joe Namath, Lynn Swann and Roger Staubach," says Frank Supovitz, NFL senior vice president of events. "A great television and sports moment!"

"Doing a milestone event that is, more or less, a one-time event is slightly different than doing a milestone event for a nonprofit whose gala has been going on for years," notes founder Shelly Tolo. "It really is an opportunity to take the existing event to the next level that will hopefully create a new benchmark for years to come."

Showtime Group helped a prominent businessman celebrate his 80th birthday in November with an event where every moment was remarkable.

The crew worked round the clock for eight days to create the event venue on an island in India, where superstar Shakira entertained.

Even the 10-minute ride from the hotel jetties to the venue was astonishing. Working with Studio Festi, Showtime populated the lake with huge "swans," dancers on floating pianos and aerial balloonists who skimmed the water's surface, an experience created "to blow peoples’ minds away even before they reached the venue," management says.

"A Japanese-based firm--celebrating 100 years of business in the United States--against the backdrop of the Metropolitan Museum’s Temple of Dendur," says Matthew David Hopkins, creative director of 360 Design Events and Matthew David Celebrations. "That’s a challenge!"

To create a truly grand entrance statement for the January event, the team executed a huge '100' out of 1,261 votive candles.

In the Sackler Wing of Egyptian Art, the team used an oversized double-sided floral "100," both to greet the guests going into the hall and also as a backdrop for the stage.

As a global company, Tokio Marine "embraced elements of many cultures in both its decor and food choices," Hopkins notes. "This openness helped to juxtapose a strong Japanese style with the Egyptian art."

The September-October issue of Special Events, which mailed last week, includes the complete version of this article along with the 11th edition of our "50 Top Event Companies" list. The magazine is free to ISES members; subscriptions can also be ordered here.