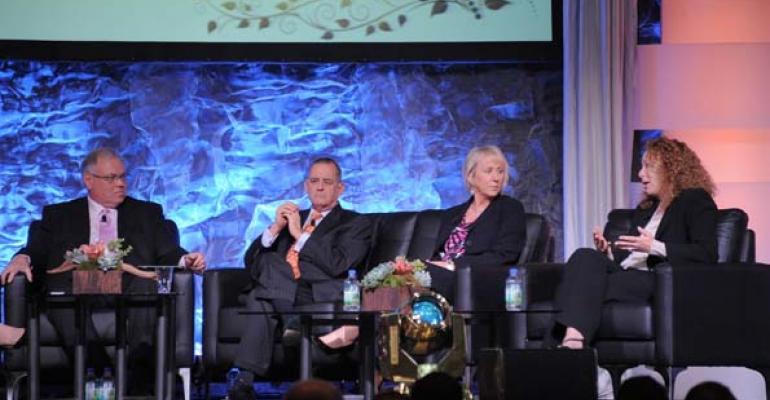 Image, perception and ROI of incentives are all major topics

DO ASSOCIATIONS HELP? Among the questions posed to the panel, and to the audience, was “Rate your perception of how our ‘industry associations’ are working together on the issue of primary interest to you within our meetings industry?” A consensus among the seven panelists was that prior to 2008, the industry organizations worked together occasionally, but the economic challenges that started in 2009 brought the industry organizations together, in a very positive way.

ASAE's Graham noted that the adversity of the economy is what led to the "Return On Investment of U.S. Business Travel" study, and to other studies, which have been beneficial to the meetings, travel and hospitality industries. Economic challenges also prompted the industry organizations, Graham said, “to really come together with messages about the economic impact, jobs, and tax revenues of the industry, which resonated well with Washington politicians, on the federal, state and local level. Face-to-face meetings are important, and we made that case together, and we now get together regularly to make sure what we are doing is in the best interest of the collective industry. We are working together extraordinarily well.”

PCMA's Sexton agreed that the industry organizations are working together far better now than they ever have before, but added that the industry organizations need to continue to get the messages of the economic impact study out, since some in Washington still see meetings as “boondoggles.” She expressed concern that since the economy is getting better, there is “less pressure to finish the job” [about messaging], but she and her counterparts are committed to doing this, as they all have a desire to “come together to make our industry stronger.”

ADVERSITY FORCED CHANGE USTA's Freeman noted with irony, “When the president said, ‘Don’t go to Las Vegas’ [a few years ago], it was the best day for our industry, because it gave the opportunity for the industry to intsoduce itself. It was the adversity that brought all of us [industry organizations] together, and it allowed us to build relationships with the folks in Washington to help them better understand what the industry does.”

Freeman continued, “It has paid dividends since, in a wide variety of areas, to the point where the Obama Administration has embraced travel in ways that no other administration has done – from putting out a year ago a national travel strategy, to reducing visa wait times for people getting into the country, to getting into the Gulf Coast with his daughters to let everyone know that the area is open for business. The administration has taken a different tone because of the lessons learned in 2009. We’ve made great headway, and we’re finding out how we [industry organizations] can work better together. We [in the industry] all have a responsibility to be an advocate for the meetings industry, and now we are better equipped to explain the ROI of meetings, and we are much further along than we even were 12 months ago.”

WHAT NEXT STEP? A question posed to the panel and the audience pertained to the efforts deemed most important for the industry organizations to focus upon, and 44 percent of the audience selected “influencing policy-makers to understand the economic impact of meetings, and the effects of regulation and policy.” This was followed by “establishing the value of face-to-face meetings and conventions” with 30 percent of the vote; and “education, teaching, professional skills, applications, and best practices” with 18 percent of the vote.

Freeman said, “We need to tell our story better, to three audiences: business leaders, program participants, and policy-makers. Business leaders need to see the bottom line impact from these meetings. Program participants [need to be] fully aware of the ROI of their participation. Policy-makers want to know about economic impact and the millions of jobs tied to the industry. Each of these three audiences is critical.”

D’Aoust said, “There will be challenges with the next generation, but we have a great opportunity for mentoring and education, to teach the value of face-to-face meetings. They grew up differently with electronics but as they see the importance of business relationships they will see [in-person meetings] as an asset to help them move forward.”

Sexton added that she feels that corporations, associations and organizations need to have a digital strategy, and need to make meetings more interactive.

Another question that was posed focused on the greatest concern when discussing, planning and executing a meeting and/or incentive travel award program. The results of the audience poll: 43 percent indicated “cost related to the event”; 43 percent selected “ROI on the program investment”;17 percent chose “regulations surrounding executing the program”; and 14 percent indicated “perception/optics relative to the program.”

Freeman said, “Perception is still a big issue. As soon as we can transition that discussion to value and ROI, the better it will be.”

WORTH THE WORK Sexton added that organizations need to have the value and ROI of the program beforehand. “Four- and Five-Star hotels are not just for rich people,” she said, to applause from the audience. “With incentive [programs], people get to experience a four- or five-Star hotel, and they work very, very hard to accomplish those goals.”

In responding to the question posed, Graham said, “The more you can quantify value and ROI, and document it, that counters perception. Value and ROI will trump perception every day.”

D’Aoust said, “ROI for incentives is an easy story, because if you have the right process, the company has to exceed goals before someone earns the award, and it is recognition and incentive for next year. And organizations need to focus on their meetings that drive the growth of their organization.”

The last question discussed was: “Do you foresee your meetings, conventions, and/or expositions migrating to increased global programs and events in the next decade?” In response, 38 percent of the audience said “Yes – Definitely!”; followed by 27 percent that opted for “Somewhat”; with 18 percent selecting “this is increasingly our focus”; and 17 percent voting “No.”

Sexton said, “It is a growing requirement for at least 58 percent of our members, hosting or involved with meetings outside of the U.S. It has been on an upward trend for the last five or six years, if not longer. It is a growing trend, and there will be more and more.”

Johnson of Rx Worldwide said, “Our model has changed. We are now 45 percent to 48 percent outside of the U.S., primarily Latin America, Asia and Europe. I see it growing.”