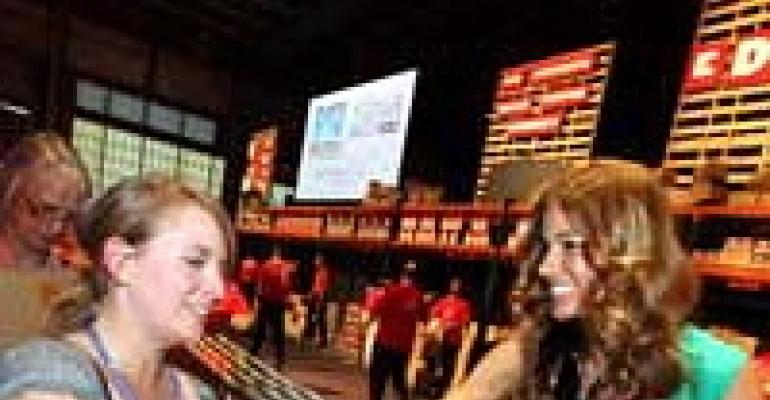 Managing events with lots of attendees requires lots of skill

Managing an event with hundreds of guests is tough enough. But when the guest count numbers in the thousands — and even hundreds of thousands — the potential for problems grows, too. Here, four case studies of big-time event planning gone great.

HOW THEY DID IT: Target replaced its usual party at the annual National Conference on Volunteering and Service in New York with a spirited session that put guests to work packing food boxes for local service programs. Beverly Hills, Calif.-based Caravents masterminded the evening, converting a vacant warehouse into the event space. The event team set up meal-kit assembly lines where each guest could pack a box that would feed a family of four for three days; guests were so enthusiastic that many happily lined up again to pack a second and even a third box before returning to the party buffets, reports Caravents founder Cara Kleinhaut.

Keeping the party vibe going was an ongoing entertainment lineup performing on a 50-foot stage. The entertainers celebrated each meal-packing milestone. When 50,000 meals were packed, a local school's drum line marched around the space; at 75,000 meals, a “surprise” flash mob — actually 100 well-rehearsed catering staffers — broke into a dance and handed out cups of sponsor Ben & Jerry's ice cream.

Kleinhaut notes the importance — and frustration — of having to invest so many dollars into preparing the space, such as adding power and arranging for trash removal, versus putting beautiful decor. But the overwhelming support of attendees made up for it. “From a professional standpoint,” she says, “this is a highlight of my career.”

HOW THEY DID IT: Staging the event at the Lincoln Memorial meant that the event team from Washington-based CSI Capitol Services Inc. had to coordinate with a dozen different jurisdictions, notes senior operations manager Kelley Gillespie. A year-long planning process included myriad details such as training 700 volunteers, coordinating 1,000 “official” event busses and providing 75,000 bottles of water.

Key to the rally's success, Gillespie says, was CSI's planning document: a 50-page logistical analysis of the event. Developing the document took analysis of “lots of scenarios,” Gillespie reports. For example, the event team knew they had to turn to radios for communications instead of their cell phones because Beck planned to ask attendees to text donations to his charity, tying up that communications channel.

And the event was a success: There was not a single arrest, “and the police were happy,” Gillespie notes. “There were so many things that could have gone wrong that didn't, because we had that [planning] foundation.”

HOW THEY DID IT: Los Angeles-based EventWorks took over a 221,000-square-foot hall at the Anaheim [Calif.] Convention Center to stage the gala evenings. Each four-hour event included dinner from center caterer Aramark — a total of 38,400 meals — and a custom entertainment program developed by EventWorks.

The program keyed on the familiar “Hollywood star” theme — recognizing both the locale and the achievements of the guests. Since a scant 3 percent of guests spoke English, entertainment acts transcended language barriers with tributes to Michael Jackson and the Beatles, shadow dancers, a comic piano artist and the AcroDunk basketball team. The EventWorks team also brought in A-Mei — a pop superstar in the Mandarin-speaking world — and her backup dancers from Taiwan.

While certain elements — such as staging and lighting — could stay in place for the five galas, many others — such as dining tables and floral — had to be reworked for each event because guest counts varied. And to make sure every performance had “the excitement of opening night,” says EventWorks head Janet Elkins, the EventWorks team required extra rehearsals for talent, speakers, stagehands, sound, lighting and “very extensive” pyro.

Elkins knew the galas were going well by the enthusiasm of the guests. “They loved to take pictures and videos of everything and anything,” she says, “and that includes pictures of me, everyone on the staff and even the security guards!”

HOW THEY DID IT: With only two months' lead time, Vancouver-based MVKA Productions oversaw this lively event, which showcased the hip nightclub scene of downtown Granville Street to MPI attendees. Due to the tight time frame — the event ran from 7 p.m. to 10 p.m., and the street had to reopen to the public by 10 p.m. — the MVKA team nixed the idea of installing much decor, turning instead to an organic “street party” atmosphere with a rich mix of street entertainment acts and brightly colored banners. A 360-degree stage set in the center of Granville Street presented dueling DJ's and a stream of dancers overseen by Brock Jellison, who choreographed portions of the 2010 Olympics Opening Ceremonies.

While the party had a street vibe, the planning process was strictly professional. MVKA's longtime working relationship with city personnel aided in the permitting process, notes managing director Laura Triay. To keep the block secure, MVKA closed off both street-side entrances with fencing wrapped in colorful branded graphics, stationed both city police and private security on-site, and briefed all participating vendors on security measures. As guests passed through the two entry checkpoints, they were handed event guides, which mapped out food and entertainment stations and outlined the event's green components, including that serviceware was all either washable or compostable.

Triay says the party demonstrated that Vancouver can “throw a world-class party!”