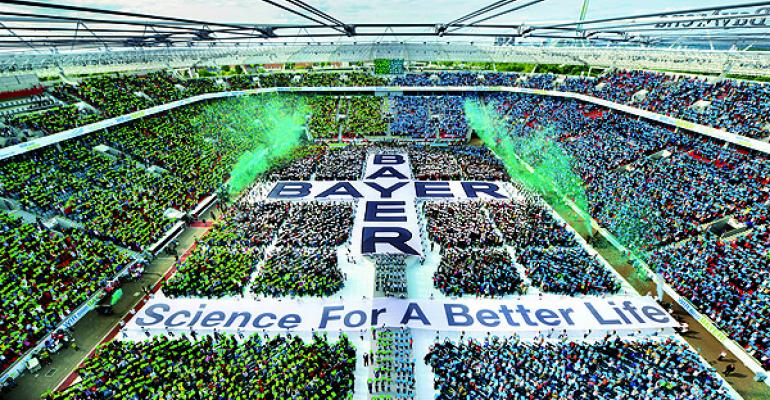 Vok Dams Events helps Bayer Corp. celebrate its 150th anniversary with a spectacle in a soccer stadium for 30,000 current and former employees and their families.

Many companies never reach their fifth anniversary. So when a company hits 150 years in business and employs some 110,000 staffers worldwide, a big celebration is in order. When chemical and pharmaceutical company Bayer Corp. turned 150 last June, it turned to intentional event production powerhouse Vok Dams Events, headquartered in Germany, which started thinking big for ways to mark this landmark.

The team's No. 1 goal was to involve Bayer's employees, both current and former, and their families in the action. Keying on the phrase "We are Bayer," Vok Dams began developing the program.

The centerpiece of the 150th celebration was a spectacle staged in Bayer's own premier league soccer stadium for 30,000 current and former employees and their families. Rather than hire professional entertainers, the Vok Dams team turned to 1,500 Bayer volunteers, from a young gymnast to the company's own philharmonic orchestra. Finding talent within the company ranks wasn't a tough challenge because Bayer supports a wide range of sports and cultural clubs for its workers.

The program included conventional elements, such as a speech by the head of the company's board, along with surprises, including interviews with married couples who first met while working for Bayer. Old-timers shared what it was like to work for Bayer years ago, followed by performances from children now enrolled at Bayer kindergarten schools.

A highlight of the celebration was the creation of the biggest-ever Bayer logo, created by the 30,000 spectators holding colored sheets of paper. The preparation of the logo required a night's work placing 30,000 sheets of paper in the stadium seats, all in proper position.

The Bayer celebration brought special rewards to the Vok Dams team. Not only did the event land a Special Events Gala Award for "Best Event for a Corporation" at The Special Event in January, it also brought accolades from the media, including one reporter who said, "We can't wait for the 300th anniversary celebration."--Lisa Hurley