/sites/all/themes/penton_subtheme_specialevents/images/logos/footer.png
Recent
Recent
Who's News in Special Events for July 29, 2021
Jul 29, 2021
Here Come the Newbies: Preparing for the Event Pro Blitz
Jul 27, 2021
The 4 Elements of a Successful Business Model (and How to Fill in the Gaps)
Jul 24, 2021
Happening Next Week! The NEW Virtual Experience
Jul 23, 2021
Marketing Your Way Out of COVID
Jul 22, 2021

View Our Webinars!
Featured
Mouthwatering Menu Trends for the New Year
Apr 19, 2021
Bienvenidos a Miami
Jul 20, 2021
It's Here! The Special Event Kicks Off Today!
Jul 19, 2021
Serving Clients in an Amazon-Obsessed World
Jul 16, 2021
Special Events
brought to you by 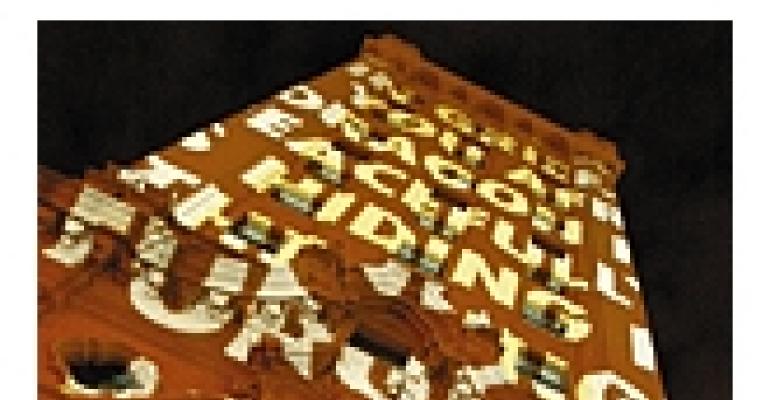 BACK TO THE FUTURE

WHAT THEME BEST serves a launch for a building yet to be built? The future, naturally. And the most desirable motif for an upscale Miami bash? Art deco, of course.

Having a “perfect client” — with a background in event marketing and a solid sense of design directive and event objective — was a treat for his team, Velarde says. It also didn't hurt that Terra Group senior vice president of marketing and public relations Gigi Ganatra also “didn't micromanage — she let us run with the event.”

Then there were furnishings and decor — all designed to blend past, present and future while serving as a backdrop for abundant branding. Because the client said she wanted “lots” of AV, Velarde notes, the layout plan included a series of 30-foot-high projection screens along the venue's perimeter, displaying renderings of the new development. The plan also incorporated multiple seating areas, one of which — a central, elevated, soft-seating space — featured white leather couches, chocolate-colored wood tables and natural-tone carpeting. To bring warmth to the winter event, Triton tended toward gold and amber lighting and added palm trees and other fair-weather foliage to the scene, Velarde adds.

Design challenges conquered, the Triton team faced yet another cause for concern: The event location, which was the future construction site for the planned condo complex, was “just a big, ugly parking lot” in the middle of the city's still-developing downtown, the producer recounts.

Rather than concealing the site's urban setting, Velarde wanted to incorporate it. Opting against tenting, he went instead for an open-air atmosphere, adding comfort underfoot in the form of black Astroturf, installed only after a paving company came in to smooth out the lot's vast span of rough asphalt.

Because of the unsheltered environment, there was also the concern that, should a stiff wind come up, “the projection screens would act as sails,” he says. “We had to bring in very good riggers to secure them and make sure safety was well-handled.”

High-profile touches like a text-based installation by acclaimed artist Jenny Holzer — commissioned by the Terra Group in conjunction with Art Basel and projected onto the exterior of the city's nearby Freedom Tower — added cachet to the bash. But, Velarde adds, without low-profile but critical logistics planning, the event wouldn't have gotten off the ground. “We didn't do anything for the first three weeks [of a two-month lead time] but work on the floor plan,” he notes. “The goal was to do 45-degree angles throughout so that people flowed freely through the event.”

And it's attention to details like logistics, along with design, that originally sold Ganatra on Triton's production capabilities, and now prompt her praise post-event. “Triton did a fantastic job of pulling everything together,” she says. “They're very professional and thorough [and] they really listened to what we were looking for — the concept, image and brand we wanted to portray. They made sure everything coordinated with the theme and tied into the epicenter of the 900 Biscayne Bay brand. It was an incredible event.”