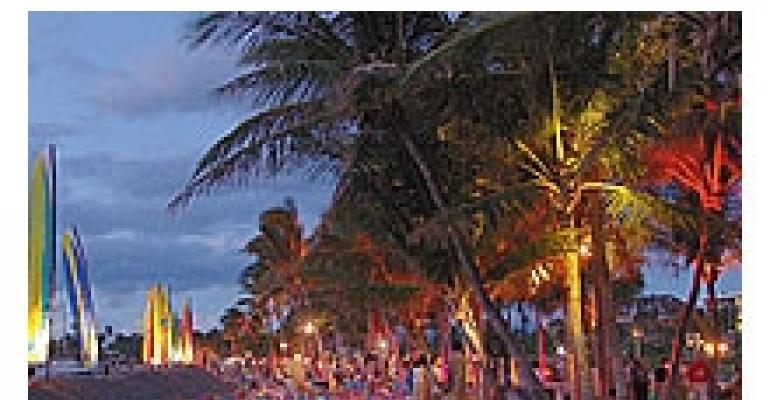 REPEAT events pose challenges for any producer. In the area of incentives, the pressure's that much more intense. Intended to show corporate employees what's in store for them if they work their hardest, these events must be sensational enough, year after year, not just to titillate, but to motivate.

With the welcome night event for a 1,200-attendee multi-day incentive program in Hawaii for client Washington Mutual, Sherman Oaks, Calif.-based Extraordinary Events found itself facing not just the usual repeat-gig difficulties and incentive demands, but a host of fresh new obstacles. To overcome the difficulties, the Extraordinary Events team opted to take a few chances, focus on fun, and in the face of the most daunting scenarios, adopt a “go with the flow” attitude, says executive vice president of production Donna Richardson.

With the number of evening events cut from the usual four to three for this year's program — Extraordinary Events' fifth year planning the event — the ante for the welcome night bash was instantly upped, Richardson recounts. “The client did not want to do another reception by the pool,” she says.

The producer's solution? Take the night off site — and onto a strip of famed coastline located a mere five minutes from host property the Hilton Waikoloa on Hawaii's Big Island. But there was a catch. “We had tried twice in the past to do a beach party for the client, and twice the locations had to be changed due to weather,” the producer says. She hoped the third time would be a charm.

And charmed the planning did seem during the months between the initial July 2004 site inspection and Richardson's return for a second inspection in December. That's when she discovered the berm. “I just about fell over,” she says. The massive mound of sand — built by the property management company that oversaw the beach site every winter to serve as a barrier against rough seasonal surf — stood almost 7 feet high, obliterating the view of the ocean and gobbling up 20 feet of waterfront her crew had planned on using. Richardson says she decided to hope that it would be gone by the time she returned for event setup in calmer February, when the event was to take place.

Come her return, however, the berm still stood, and a forecast for big waves meant that the property management company stood firm against removing it. “I begged and pleaded, but they said no,” she recalls. “So I thought about it more, and I knew I really didn't want to hurt the beach or cause any damage.” Also, she says, “I didn't want water to come into the party.”

Giving in to nature's demands, Richardson did manage to win a concession: The sand wall would be scaled back, earning her 6 feet of space she had lost. “That created a long, bowling-alley kind of effect, as opposed to having a wider area, which added audio challenges,” she says. “But if you can't make it go away, you have to go with the flow.”

Working with lead designer Sean de Freitas of Dania, Fla.-based Designs by Sean, the team put together a toes-in-the-sand beach bash with a vintage Hawaiian feel.

Going for authenticity, thematic consistency and maximum fun, they laid out lounge chairs and long, rectangular, luau-style tables. Mixing things up were hotel rounds with their legs folded under and milk crates zip-tied to their bases to keep them low to the ground. Bonfires, stage trussing disguised with palm fronds, and bars designed to resemble truck tailgates all added to the old-time surf party vibe.

But the element that most enticed guests was the “outdoor drive-in” area where old surf films were screened on spandex screen. The guests' reaction even surprised Richards: “I was amazed at how many men got a beer and sat down and really watched,” the producer says.

When they weren't watching surf flicks or snacking on roasted pork belly and Huli Huli chicken, guests were taking in a stage performance by surf-tune crooners Papa Doo Run Run. Those who opted not to dance could get a better view of the band by situating themselves atop the very sand wall that had so concerned Richardson — and many of them did, she says.

As for the weather problems that had doomed the planned beach parties of the past — the night of the welcome event was, thankfully, dry. The only weather issue was a bit of brisk wind, from which guests were protected by, of all things, the once-worrisome berm.

For Richardson, who says she had her views more than confirmed by the raves she heard at the party and the client's post-event attendee survey, “We achieved the goal of raising the level for the welcome reception.”

That's important because, with incentive programs accounting for 50 percent of Extraordinary Events' business, according to Richardson, the success of incentive-related events is key not just to motivating corporate staffers, but to beefing up the production company's bottom line.

It's also important to Richardson on a more personal level. Mainly due to weather issues, “Last year, a lot of things didn't go our way,” she says. “This year was relatively flawless. That's hard to achieve, and it's so incredibly gratifying when you do.”