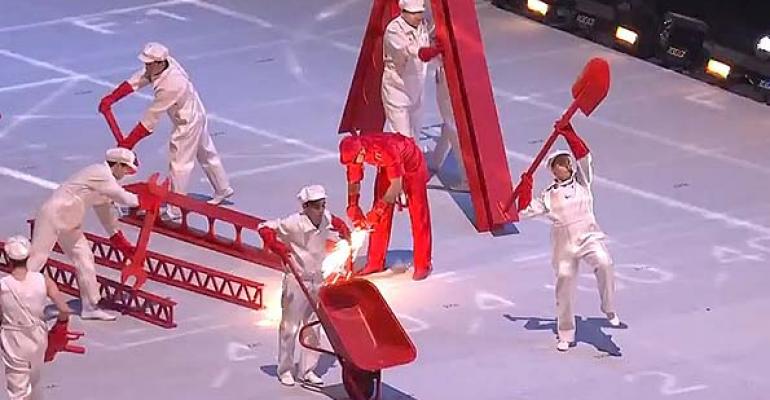 <p><em>The Olymics Opening Ceremonies in Sochi, Russia, feature a segment on the rise of industrialization.</em></p>
Entertainment

Event Pros Share their Takes on the Sochi Opening Ceremonies

Special events professionals give their opinions on the Olympics opening ceremony in Sochi, Russia, praising the sophisticated use of technology.

Much of the world watched the opening ceremonies at the Winter Olympics in Sochi, Russia, on Friday, with few with as keen an interest and an expert eye as special event professionals. Here are their takes on what worked well and what did not:

A 'WOW' TECHNICALLY Overall, event pros give high praise to the technical expertise demonstrated in Sochi, especially the use of projection mapping.

"The technical skill was second to none," says Doc Waldrop, head of Full Circle Lighting and Productions of Atlanta. "The projection mapping was breathtaking, and the content provided for the projectors was very well done."

The highlights: "The water scene with the boat was spectacular," Waldrop says. "The story of St. Petersburg was also very well done, with the map spinning to another locale as the marchers moved. I'm still trying to figure out how the cannons worked when they fired ... " On a scale of 1 to 10 with 10 being best, "I would give them a solid 8.5," he says.

"Projecting the world map onto the ground looked beautiful, and flying the large set pieces through the air was very unique and fresh," agrees Jon Adcock, president of Orlando, Fla.-based PTE Productions. "I also enjoyed subtle elements like the LEDs installed into the side of the seats and down the walkways with the ability to control them and add them into the show. It's always great when lighting radiates from the audience and not only from the stage.”

"Nothing can top what Beijing did in the Bird’s Nest[in 2008]--with tens of millions worth of LED panels--but at Sochi the backgrounds projected on the floor seemed to integrate well and support the storyline," notes David Corwin, head of Megavision Arts in Santa Monica, Calif. "I heard there were issues with viewing some of the scenes 'upside down' from the non-media side of the stadium, but that’s always an issue with theater-in-the-round-style seating."

FAILING SNOW Debbie Meyers-Shock, CSEP, head of Dallas-based Bravo! Entertainment, says she "hated" to see the snowflake fail to morph into the fifth Olympic ring. "No one, I hope, likes to see technology fail at any event," she says. What most impressed her: "The amazing and colossal rigging system, and the projections on the stadium floor. I understand there were 120 projectors and brand-new software that made it possible. I love seeing new ways to use event technology."

She adds, "The visual moment for me was the sailing ships depicted as video etchings with the human interaction. The illusion that they were working on a real ship deck was incredible."

Waldrop says he feels sympathy for the Sochi team after the snowflake fail. "I was a bit disappointed to see on social media that a fair amount of industry folks jumped on the fact that one ring failed to function properly," he explains. "My heart sank for the production team at that moment. I daresay that no one that tries to put on an event of this scale and of this magnitude is immune from a mechanical failure, or an unfortunate mistake."

TELLING THE COUNTRY'S STORY Olympics ceremonies play to both an international and home audience. Rolando Espinoza, head of Las Vegas-based Champagne Creative Group, believes the story told by the ceremony—highlighting Russian history and culture--succeeded for both Russian and international audiences.

"You don't have to be a Slovak to enjoy the retelling of the little Russian girl's dreams," he says. "Technology is still leading the way for event experiences, but good old-fashioned stage direction still has a place in stadium events. Introducing the athletes early, in a unique way; center stage; made for great TV viewing, as well as giving the world-class participants a chance to enjoy the party."

But other event pros say that technology outshone creativity in Sochi.

"Spending large sums of money on equipment and special effects does not outshine creativity," says Douglas Johnson, executive producer and president of Los Angeles-based Entertainment Plus Productions. "I felt there were places that the audience was forced to stare at a mechanical piece far too long, to justify its cost."

Johnson also believes the event developers missed some opportunities to showcase the cultural jewels of Russia.

"Please don’t kill me, but the Bolshoi 'couples' moment was lackluster," Johnson says. "The columns rising out of the floor was something we saw on a grander scale in China. When you hear the word 'Bolshoi,' you instantly think, 'Wow, this is the supreme ballet company in the world.' Although lovely, this moment lacked the 'wow' I was expecting from them."

He adds, "One single ballerina on such a gigantic stage--where was the chorus of 600 girls in white tutus that I expected to burst onto the stage? When the girls spun like jellyfish with white glow elements, it was beautiful, but again, the technology overshadowed the primary focus, which was ballet."

While many event pros say that working on an Olympics opening or closing ceremony would be a career highlight for them, Mark Flaisher, head of Los Angeles-based Mark Flaisher Entertainment, already has done so. He worked for production mastermind David L. Wolper at the 1984 Summer Games in Los Angeles, which he dubs "the most fantastic experience of my production life." 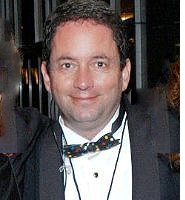 MARK FLAISHER: I am going to give them a 10 for the wow factor and an 8 for the show overall. Unfortunately, because of the direction of the show, the video that the television audience was able to see left a lot to be desired. The people I was watching with all complained about close-ups when they wanted long shots and vice versa.

We suffered from the same thing in 1984 at the Olympics in Los Angeles, when we had a sports director calling cameras for the Opening and Closing Ceremony. What the folks in the stadium saw was much more spectacular than what was shown at home. David Wolper always reminded us in production meetings that 99 percent of our audience would be watching on TV, but we could not control the director.

For example, I produced the "Flags of the World" card stunt for the opening ceremony. In the stadium, it was up for several minutes, but due to commercials and other things, the home audience saw less than 30 seconds.

Q: What, if anything, would you have done differently in Sochi?

MF: It's too hard to second-guess the producers, so I won't.

Understand that half of the ceremony is required by the IOC. The flag ceremony, the declaration, the march of athletes and many other show elements are required. I think they did the required show elements very well and were very creative with everything else.

WITH THAT BIG A BUDGET ...   Several event experts noted that with the ceremony's healthy budget, the Sochi team was expected to deliver.

"With a $780 million [U.S.] price tag, it turned out grand!" Espinoza says. It also didn't hurt that the venue—Fisht Olympic Stadium—was purpose-built for the ceremonies and not for sporting events, he adds.

Event pros also stress that everyone in the industry can take something from Olympics ceremonies to apply to their own events.

As Johnson puts it, "At the heart of this opening ceremony, Russia wanted to do their best, and present their games and their country through a moving, emotional, and mind-blowing experience. As a show producer, that is my same goal in every production we do. Mediocrity is our enemy!"

He adds, "Let's all keep pushing ourselves and our clients to achieve new heights, new and different outside-the-box creativity. Let’s stand up against cliché and predictable shows. Let’s treat all of our shows like the Olympics and squeeze every ounce out of every dollar to deliver the 'gold medal' level productions our clients so deserve."