ADVERTISEMENT
Party 50 years in the making

Marking a half century, Caesars Palace Las Vegas
celebrated its 50th anniversary on Aug. 5--exactly five decades from the day it first opened its doors--with a special birthday pool party with nearly 3,000 hotel and special guests.

Here, a lighthearted take on the Julius Tower at the property.

A highlight of the night: the dramatic horse-drawn chariot entrance by "Caesar" himself.

The party is hosted by award-winning chef Gordon Ramsay at the Garden of the Gods Pool Oasis.

Embracing the Roman and Greek origins of the Summer Games, the evening includes a ceremonial torch run, followed by Ramsay lighting the impressive cauldron.

The five-tier cake gets its close-up.

Party by the Neptune Pool

Cocktail servers dressed in bubble costumes pour glasses of champagne for guests, surrounded by special lighting and an art display with ping pong balls in the Neptune Pool.

A long view of the Neptune Pool

A long view of the Neptune Pool.

A performer in the Neptune Pool

A performer in the Neptune Pool.

Live entertainment includes a performance by a roller-skating duo from ABSINTHE and a DJ set by OMNIA Nightclub DJ Mark Eteson.

Poolside guests and crowds outside the resort on Las Vegas Boulevard admire the 10-minute anniversary-themed fireworks show above the re-imagined Julius Tower at Caesars Palace.

The pool reflects the fireworks.

The next night, Caesars Palace continues to commemorate its rich history of world-class entertainment and iconic sporting events with a red carpet arrival and grand gala event for nearly 3,000 invited VIP guests.

Mandel, who previously appeared at the original Circus Maximus showroom and served as master of ceremonies for the Caesars Palace 30th anniversary television special in 1996, hosts the evening’s festivities.

Donning an Antonio Berardi outfit, Planet Hollywood Resort & Casino headliner Jennifer Lopez makes a surprise appearance during the opening of the gala among a flash mob led by showgirls and a full orchestra and wishes the legendary resort happy 50th anniversary.

Headliner Tony Bennett and his history with Caesars
Denise Truscello

Bennett was the second performer to ever appear at the Circus Maximus Showroom in 1966, and in 1969 was the first and only entertainer ever offered a lifetime contract to perform at the trailblazing resort. 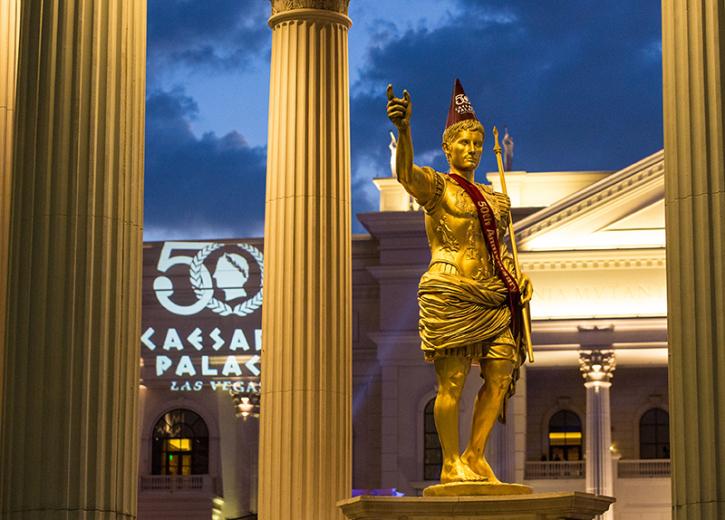