With the creative operetta “National Epic,” Spectrum Entertainment did the impossible and produced a world-class stadium show--in less than 40 days for the 87th National Day for Saudi Arabia. On behalf and in cooperation with the leading Agency MMG, a storyline was created from the ancient cultural traditions all the way into the future and Vision 2030 of Saudi Arabia.

The evening and the show was an incredible stadium spectacle supported by the most modern event technologies, such as a 50- by-22-meter front projection screen, a giant stage of 70- by-25-meter with runways into the audience, diverse water fountains, as well as a laser and pyro show.

The group of international professionals from Spectrum Entertainment was able to stage a show,that involved a cast of 300 actors, dancers and musicians combined with a stunning performance of real horses and camels onstage.

For the first time mixed audience were allowed to attend the event to underline the aim of the Kingdom to open society.

Making all this happen smoothly and seamlessly involved a huge effort by a dedicated project team.  Thanks to their wide international network and expertise, Spectrum Entertainment was able to pull an outstanding team of event professionals and creative minds together to create this amazing show and image of the nation of Saudi Arabia.

Leaded by Julien Beyrouthy, general and region manager of Spectrum Entertainment Services in MENA; show director Munir Al-Qahtani, known for producing stadium shows in Saudi and a track record of integrating heritage and culture into stage shows, as well as director Marwan Al Rahbani for the theatrical part of the show came on board.

On the production and logistical side, Massimo Fogliati and Guido Zanca came as production managers on board to help overseeing the technical aspects and the operation.

The main part of the show was driven by the visual content on the giant screen.  To create this immersive experience for the audience, the Dubai-based company The Onlooker was contracted to produce and edit the content within the short time-frame.

The TV production company Seven Production is part of the Middle East AV Alliance of Spectrum Entertainment and supplied the broadcast equipment and OB vans for the National TV of Saudi Arabia.

Spectrum's lighting designer Allessio de Simone combined some of the fixtures with a BlackTrax system to give him nearly unlimited follow spot positions, as the entire rig could be used as follow spots if needed. This gave him the ability to track actors and performers, as well as the animals onstage. 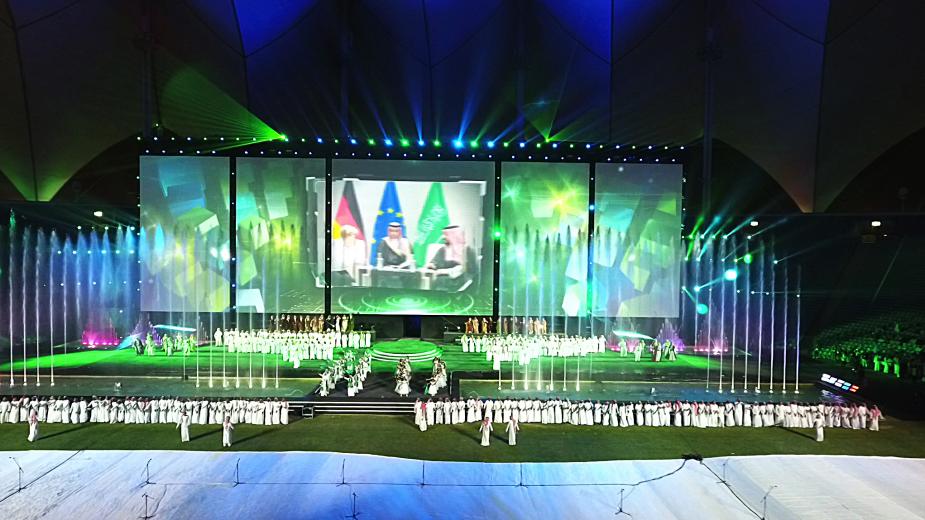