The United States Conference of Mayors' 83rd annual meeting opened with a spectacular gala at San Francisco City Hall, where the lighting team created a design for each performance.

Within the rotunda, the round stage illumination changed from traditional, conventional washes of light to LED moving heads for enhanced color and energy.

Drama in the dome
Courtesy Got Light

The unique sculptural rotunda dome was bathed in three layers of color gels.

Seattle-based Blue Danube Productions brings the Gala home for its work on the Alaska Airlines rebrand launch in this recap of Gala Awards for technical production.

Enlisted to create a grand yet intimate announcement of the first rebrand in 25 years of Alaska Airlines, the event team rose to the challenge of transforming a maintenance hangar, revealing a 737 airplane and helping the airline earn the trust and buy-in from employees and press around the world.

The main event in Seattle hosted 2,000 employees and more than a dozen members of the press; over the course of the following week, four subsidiary and supporting events were also produced in four different states.

The drill team struts its stuff.

And the new brand is revealed
Courtesy Blue Danube Productions

The big brand reveal. The event team's workload totaled 1,470 hours of labor and effort in one week alone.

For Genetech's year-end party, the event team merged two entirely different visions into one, creating the "Crime of the Century" gala.

The interactive game for some 1,000 guests offered prizes for attendees, featured a private show from Supertramp's Roger Hodgson, and presented a hip "murder party" entertainment geared toward millennials.

Charlotte, N.C.-based Party Reflections brings home Gala gold in Best Achievement in Event Rental Support for its work on the 2016 Wyndham Championship. Here, the bleachers at the tee box.

The Wyndham Championship is a longstanding PGA Tour and North Carolina tradition dating back to the first tournament, held at the Sedgefield Country Club in 1938. For the 2016 event, the Party Reflections team oversaw the infrastructure supporting the event.

Not an SOS but the message "We Earned This!" is spelled out on the beach. 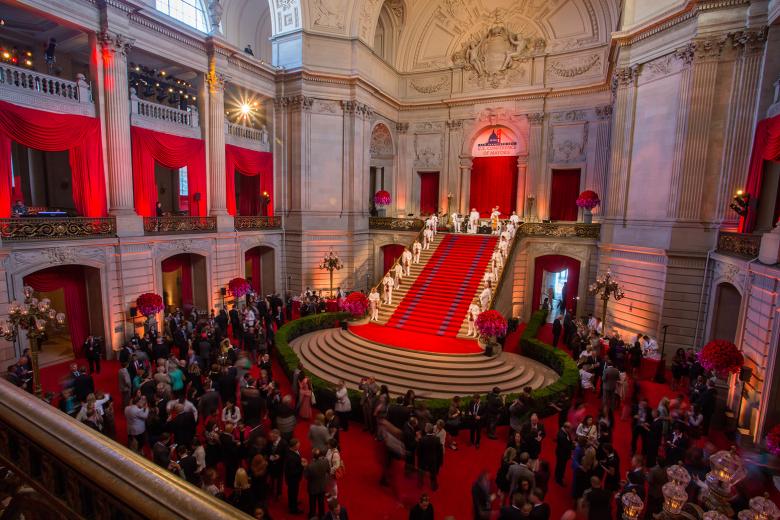 Next Up
Best in the Business: 2020 Gala Award Nominees for a Best Corporate Event--Part 1
Start Slideshow ›