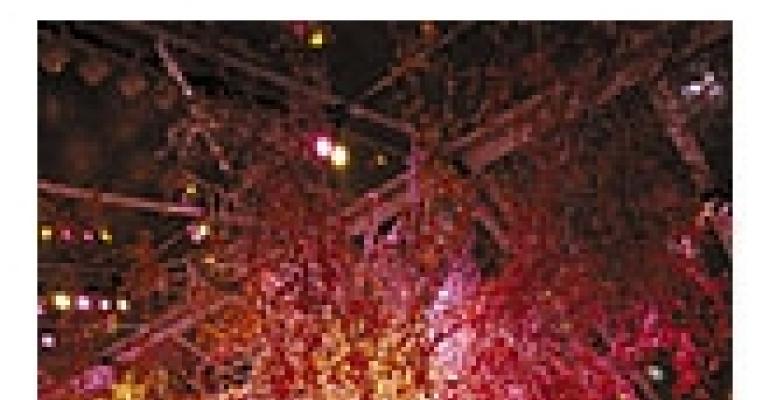 WHEN the New York City Ballet visits your city for the first time in more than a quarter century, naturally you want to fête it in style. And style was on the minds of the members of Chicago's Harris Theater Women's Board when they called upon Heffernan Morgan to design a fundraising gala in honor of the celebrated troupe. Known for its lavish floral, the Chicago-based event design house worked against type this time, creating “the biggest non-floral event we've ever had,” says president Robert Mertzlufft.

Although foregoing floral was not an original objective of the October event's design, evoking a “magical forest” feel was. Opting for inorganic materials was simply the best way to elicit the effect, Mertzlufft says.

Finding inspiration in the light-reflecting properties of crystal, the design director and his crew conceptualized a centerpiece constructed of crystal bead-encrusted stalks “like the branches on a tree,” he explains. After a sequence of back-and-forth communication between Heffernan Morgan and its supplier in China — “‘More beads! More beads!’” Mertzlufft recounts his client's reaction to prototypes — the Chinese company crafted 2,000 6-foot-tall branches and shipped them to Chicago.

Heffernan Morgan also went through a lengthy and drama-filled process in creating the centerpiece bases. While the glass base the firm initially designed looked nice, “It was way too scary” from a weight-bearing standpoint once the branches were inserted, Mertzlufft notes.

Molded urns painted with a four-step process to “produce a rich and deep metallic appearance,” he says, were a much better bet. That is until the manufactured urns arrived, with a finish that looked nothing like the paper sample Heffernan Morgan had approved. “Luckily, because we always strive to have items for an event ready at least three weeks in advance, we were able to scramble and find an automotive custom-finish company that was able to repaint all 110 pieces in less than two weeks,” Mertzlufft says. He adds, “Lesson learned. Always insist on an actual sample of a custom-made item before receiving the completed order.”

Its painting problems solved, Heffernan Morgan had to contend with yet more obstacles when site setup loomed. Mertzlufft explains that the gala dinner's 80-by-200-foot tent, erected on a concrete promenade in Chicago's Millennium Park, was outfitted with a plywood subfloor constructed directly on the concrete. “Each of the 80 tables had to be checked for level and shimmed to ensure balance for the centerpieces, which stood over 8 feet tall and weighed 160 pounds each,” he notes.

Then there was the install of the centerpieces themselves. On-site assembly of the centerpieces — branches had to be inserted into polyurethane foam inside each ballast-filled urn — took place the day before the event and required a team of 18 Heffernan Morgan staffers.

Once the complex arrangements were put together, they required special measures to put them in place. As Mertzlufft recounts, “During the mockup and presentation phase, it became very apparent that it would be nearly impossible to place these using our usual method of hand-carrying each centerpiece to the table and leaning over to place it in the center.” The solution? “A custom jig was designed to attach to a forklift, which raised and extended each centerpiece for placement into the center of the table.”

Getting the look right for the Harris Theater Women's Board gala may have been a tough fight, but come event night, the struggle paid off, Mertzlufft says.

In a tented space turned out in bronze, amber and jewel tones, Heffernan Morgan's custom centerpieces took center stage. Each formed the focal point of a table laid with custom-dyed “lipstick pink” taffeta linen, according to Mertzlufft. And with their bronze bases providing halogen uplighting from below, while pin-spots illuminated them from above, each centerpiece bathed its table's diners “in a warm and inviting glow of light,” the designer says. Not bad digs for enjoying a dinner of poached Maine lobster salad and roasted filet mignon with black winter truffles.

Perhaps as impressive as the gala's fundraising success — the event Heffernan Morgan created on a budget of $100,000 raised $2.3 million for programs including the theater's Presenting Fund — is how well the design worked. With not one flower in the room, the gala managed to “harmonize with the fall park setting” and “imbue a sense of warmth and grandeur,” Mertzlufft notes. And it didn't hurt that inorganic materials made for a great way to beat the heat: “It's always so difficult in a tent because it's so hot,” the designer adds. “It was nice not to have to think about floral product for once.”