ADVERTISEMENT
Party in the warehouse

The grand aim of the event: To raise money to send the ballet dancers on a cultural exchange to China.

The venue: The ballet company's own warehouse. Using the site required the event team to use five 53-foot trucks to empty half of the warehouse to accommodate the gala, and to build relationships with neighbors in the area to ensure parking, etc.

Coming to a traditional home

Guests entered though a cocktail space that mimicked the garden entryway of a traditional home.

Softening up the warehouse space

Once enough space for the event was cleared, the entire warehouse had to be piped and draped to cover the industrial walls, as well as the rest of the storage items taking up the other half of the warehouse space.

Plants and drape do the trick

The Mosaic team brought in more than 400 plants and covered walls and support beams in 18-foot-tall bamboo stalks.

"In order to further soften the look, we draped the ceiling with nearly five miles of drape and hung 150 parasols of various sizes and 500 paper lanterns," Mosaic says.

Powering up the gala

Working in an industrial space that is used simply for storage also creates issues with power necessary to produce an event of this caliber. After the ballet decided it wanted to use this space, the Mosaic production team made an initial site visit and discovered an outdated electrical system that did not have the power capacity needed for the A/V production.

In order to power the event, the team brought in a generator and a three-phase power box in addition to the power of the building.

LED washes and sweeps of drape

The mood was set with by the red and gold LED lighting that was washed over the room.

The production team lowered the ceiling and brought drama with long sweeps of gold drape and traditional Chinese paper lanterns.

Custom­-built frames with 52­-foot projection screens were hung from the walls so that guests could view the program from any angle.

The foundation of the outer tables were the antique blue and white ginger jar vases, which were actually donated for the event by the gala’s committee members.

These were filled with florals and accompanied by bowls of oranges and tall glass votive holders with floating candles.

The next set of tables inside that were more dramatic, with tall black Oscar vases filled with hand­-painted bamboo shoots and sprays of yellow branches.

Between the vases were red foo dog statues, inspired by the ancient Chinese guardian lions commonly found outside of imperial palaces, and simple red votives.

A fun centerpiece with fish!

The stage for speakers.

No power? No problem

Five hours prior to the start of the event during the lighting and sound check, everything had to be completely rerouted because fuses were blowing.

"The production and lighting teams did an incredible job working under pressure to problem solve and make the event happen," Mosaic management says.

Another tabletop look was inspired by the stone figures commonly found throughout China.

The figurines were dispersed throughout the table, facing opposite directions. They were accompanied by small floral arrangements in gold square vases and clear votives.

The pagoda was built to house the Peking duck station, where one of the chefs was hand­-slicing traditional Peking ducks and making spring rolls to order.

"Our production team hand­painted the tiers of the pagoda using a traditional Chinese color palette and suspended it from the ceiling over the station. The draping on the corners helped to create a defined space for the station and gave the feeling that you were stepping into a small kitchen where a chef was cooking specifically for you," Mosaic says.

"While it would have been simple to rent these decor pieces, the event team decided to build them specifically for this event so that they could look as authentic as possible. These decor pieces were huge statement pieces that made this event both unique and distinctive."

A pretty detail with lanterns and floral.

Twenty-foot-long illuminated cherry blossom branches were hung over one quarter of the tables and were studded with butterflies.

A plate of oranges makes a statement.

Attention to the stage

Attention goes to the stage.

The event teams wins on donations

Forty-seven percent of the total gross in the $1.25 million campaign was raised on the night of the gala through auctions and additional donations.

"For the event team, that signifies that we met our objective of creating an amazing experience," Mosaic says. 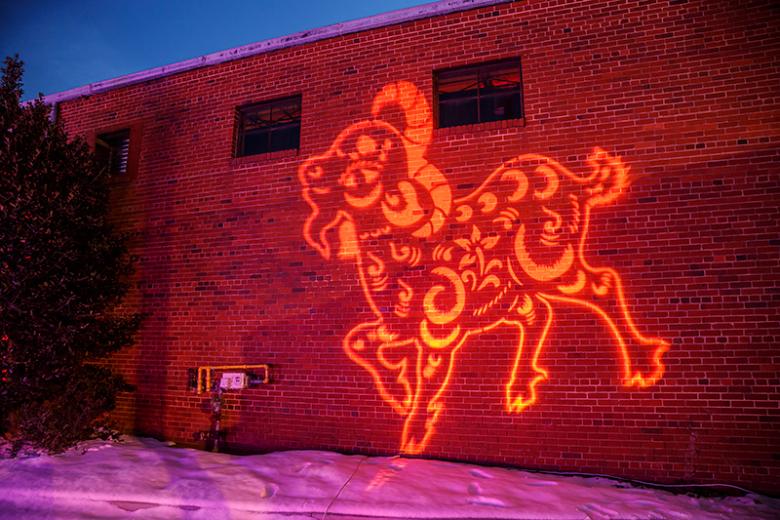 Next Up
A Late Nite Chill in Miami
Start Slideshow ›