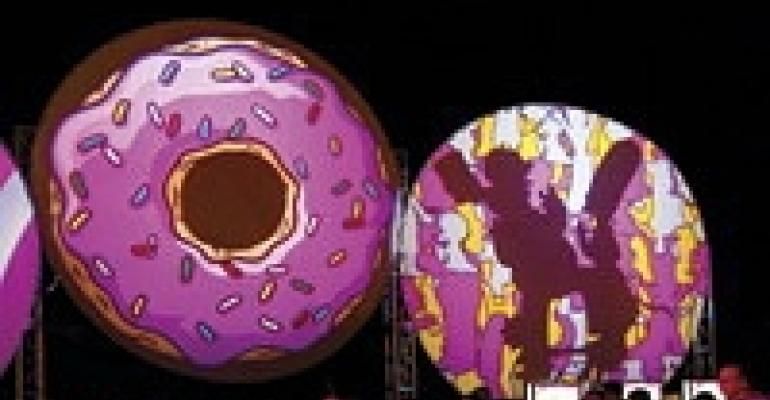 From washing over walls to putting words onto water, event professionals are finding new ways to use projections. Projections not only incorporate a 3-D element and larger-than-life color and graphics into event design, they also offer powerful branding opportunities. Big excitement doesn't have to come with a big price tag, though; in some cases, using projections to enliven events can be more cost-effective than hauling in costly candles and floral.

For a Fortune 100 client who wanted a cutting-edge image at its March event, Phoenix-based Shadow Mountain Productions delivered the latest in projection technology. “In addition to widescreen formatting and the use of the Vista Spyder video routing system, we created a branding opportunity by using Vision Plex screen pieces,” says Shadow Mountain director of sales Matt Farmelant. The special effects team cut 12 squares of Vision Plex — a new projectable surface — attached them together, and suspended them from a line of truss. Using a 10K digital projector, Shadow Mountain simultaneously broadcasted multiple images onto the screens. “The video and Vision Plex screens were the scenic elements at this event,” Farmelant says, adding that one attendee said it looked as though the screens were floating in midair.

David Merrell, CEO of Los Angeles-based event firm AOO Events, says projections are a great way to create “a ‘big look’ at a reasonable cost.” Good old gobos are relatively cheap to use, he notes, and while Pani projections are pricey, “One can fill an entire wall using them.”

At an April welcome reception for a corporate incentive event at the Saddlebrook Resort in Tampa, Fla., Merrell's team took advantage of the property's dramatic swimming pool. The team used projections to display star images from a custom-made gobo across the pool's surface. “Lighting projections with logos that show on the bottom of pools are less expensive than using floating candles and flowers to decorate,” Merrell says.

Guests at a Walt Disney Animation wrap party for the 2006 movie “Chicken Little” were treated to a dramatic projection of the famous fowl. AOO Events projected the image in color against a four-story building by using metal and glass gobos gelled in different hues. “You can cover a huge surface with projections,” Merrell says, “which makes it much more cost-effective than trying to fill a large space with fabric or other materials.”

Santa Monica, Calif.-based design and multimedia company Megavision Arts expands its appeal with widescreens. In May, the company added big drama to an event for bigger-than-life California Gov. Arnold Schwarzenegger at the Sacramento [Calif.] Convention Center. With the help of special software, the team used multiple video projectors to rear-project images of iconic California scenery onto a 20-by-60-foot screen, which took the place of a standard set piece. I-Mag images of the event's speakers were inset into the scenes. “It's a cool effect to layer the images like that,” says David Corwin, Megavision Arts owner. His creative process of designing projections for events is always collaborative, he says, “often starting with the event planner or designer saying, ‘Let's do something cool that no one has seen before.’”

For the April party celebrating the release of a Remy Martin cognac, moving lights, low-resolution LED screens and high-resolution projections infused the event with lively colors that changed hourly. New York-based K.I.M. Media event producer Leslie Short worked with Los Angeles-based production company ShowPro to use projections that would “bring the colors from the Remy Martin cognac bottle, which was designed by famous photographer David LaChapelle, alive,” Short says. “Using scenic projec-tions allowed us to get both stylized interpretations of the bottle art as well as literal images in the event space,” adds Jim Gordon, ShowPro's director of business development.

Short was eager to highlight new ways of using projections during the event and wanted something unexpected to happen each hour. “Projections were able to change speed and shape and give me variations of a single color that normal lighting situations could not,” she says.