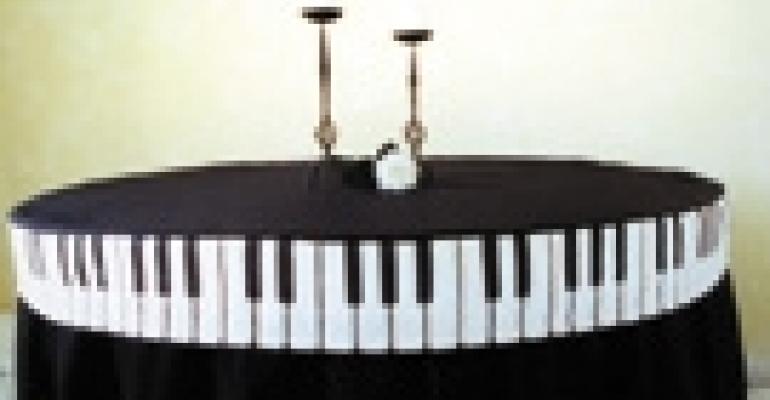 Tall orders are the order of the day when it comes to linens in special events. Claiming they've seen it all, members of the event industry want creative colors, fabulous fabrics and simpler setup. The following eight linen companies share ways in which they're staying ahead of the pack with their latest linen lines.

Texture is key in selling linen. "[Event planners] are looking for fabrics that have a lot of texture, like a weave in the fabric," says Todd Lloyd, president of Madison Heights, Mich.-based Chair Covers & Linens. The company's Galaxy line offers such a linen. "As you move around, the linen may look more gray from one angle, then more black from another angle," he adds.

Skokie, Ill.-based BBJ Linens offers bischon linen, a man-made material that feels like raw silk. "Silk can only be used once or twice," says co-owner Judy Goldberg. "Bischons can be used multiple times."

Linen colors and prints are just as varied as the fabrics they're printed on. Judi Metzger, president of Paterson, N.J.-based Tablecloth Co., says linen companies no longer offer one shade of a color. "We offer at least eight shades of blue. We go from navy to wedgewood to periwinkle. We must have 60 shades of our basic fabrics."

Nardi Hobler, president of St. Louis-based Party Arts, says that animal prints are really popular. "Some people just feel close to animals, and others think it looks exotic," she says of the snakeskin, leopard and giraffe prints she stocks.

The rise in minimum wage has prompted event planners to seek products that save labor, according to Sujata Mody, director of marketing for Anaheim, Calif.-based GBS Linens. "[Planners] are looking to save money with products that offer faster setup," she says.

Last year, GBS introduced a pleated table drape. Combining a tablecloth and skirt in one piece, the drape reduces setup time from 10 minutes to 30 seconds. "With the pleated table drape, you just take it off the hanger and throw it on the table," Mody says. With a separate skirt, "You have to put the tablecloth on, then the skirt has to be attached with clips." The drape is available in 45 solid colors; and new prints include golf, fish and grape themes.

Scottsdale, Ariz.-based SculptChair also offers an economical product. The TuxTail chair back can be put on a chair in just three seconds, says president Mitchell Kelldorf. The product fits over the back of a chair and snaps onto the chair's two back feet. "It gives the look of a complete chair cover," he says, but at much less cost than a full chair cover.

Even more attractive, he adds, "TuxTails take up half the amount of storage and cost less to ship."

Affairs By Design recently introduced a Native American series of chair covers. "We use a polyester suede," Beyer says. "It looks and feels like suede. And we stitch it on the outside so it looks authentic."

"The whole ambience of the room changes when you put a cover on the chairs", Metzger says. An event sans chair covers is "like not having shoes and a bag to go with your clothes."

Metzger adds that the linen industry has caught up with today's fashion. "Years ago we were two or three years behind, but not anymore. If [a new look] is out there, people will ask for it."