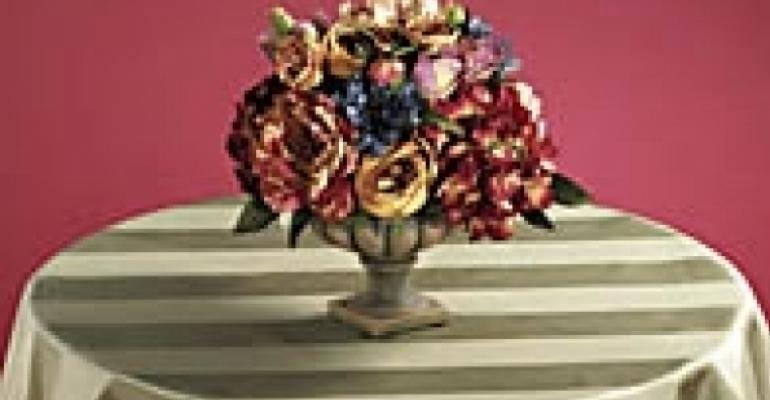 TOOLS OF THE TRADE: LINENS MIX AND MATCH

NATURAL HUES AND glamorous weaves may seem at odds with each other. But in the area of event linen, they're getting together with beautiful results, experts say.

In his East Coast region, Daniel DiDio sees a still-sensitive social atmosphere as a major influence on the new linen aesthetic. “Clients are telling me they want it to be comfortable, subtle,” says the design director for Secaucus, N.J.-based Dazian, which creates custom linen for events and theater. In response to the event climate, he has been developing several new color collections, including Naturals — a series of white, beige, soft blue and pale terra-cotta shades.

According to Mitchell Bluethman, nature-based tones also are topping sales at Jomar Table Linens, Ontario, Calif. Among Jomar's popular products are a cornflower-blue poly-satin, as well as a rose-plum organza, which is “moving like crazy,” Bluethman says.

While color gets down to earth, linen texture is taking an elegant turn, according to manufacturers.

Clients with a taste for bolder textures are looking toward layers, she adds. “They might put a white linen hemstitch over a burlap undercloth … or mix black velvet with a crisp white Irish cotton organdy.”

Intent on taking chair covers into new territory, Houston-based Distinctive Details has introduced a version of its “slipper” chair cover — originally designed for chiavaris — for hotel chairs. The new product comprises two pieces: a chair- back cover with a foam insert that can turn a rounded chair back into a square back, and a fitted seat cover with a tailored skirt. The cover's Lycra fabric can be “custom dyed in any color of the rainbow,” says company president Francesca Nilsen. “It works beautifully, and, seeing that the pieces are separate, it allows for the cover to come out of ironers with no wrinkles.”