From Allied Experiential, guests wait outside the campaign headquarters of Frank Underwood, directly across from the GOP presidential debate in Greenville, S.C.

VIPs and media were treated to a lounge area while the general public got to sit for a portrait behind the Resolute desk and walked out with a "House of Cards" branded digital photo or GIF to share on social media.

Guests are also able to select talent from the Cooking Channel and Travel Channel, charge their phones, and take a break from hustle and bustle of the SOBE Wine & Food Festival.

From Allied Experiental, Nets rookie Chris McCullough stops by the Zappos pop-up--part of the company’s year-long sponsorship at the Barclays Center.

At select events, guests could take a photo on the selfie sofa, get a complimentary face painting or shoe shine, and grab fan swag in exchange for an email address.

In Abu Dhabi, "Mother of the Nation" from Balich Worldwide describes what it means to be a mother of a family and also of a country.

Lights for the Crown Prince

The UAE Crown Prince Court lights up the Burj Khalifa with Balich Worldwide Shows for the tallest LED show ever made, on the occasion of Mother Of The Nation Festival.

Balich creates the Tree of Life

The Tree of Life at the Italian Pavilion at Expo 2015--an installation from Balich Worldwide.

CE Group transforms a convention center into a wonderland.

Southwest Airlines celebrates in style at a 2016 Southwest Rally, one of six produced annually by CPG.

Caleres taps CPG for several special events a year, called "Leaders Lab," to engage with their new and emerging leaders.

Attendees at Sport Clips' annual convention "Ignite" their passion as they gather together for a day full of exciting live experiences from CPG.

At the Mazda North American Dealers event from Corporate Magic, some 1,200 dealers are treated to three cars revealed on three turntables and panoramic imagery on three LED screens.

Over 600 different lighting instruments were used with special overhead lighting rigs that were designed to maximize the reflection of the new, innovative paint created in Japan.

It was a multi-tiered stage with center, round LED screen on a turntable, which would rotate to reveal performers and executives. Each of the two, giant panoramic screens reaching out from the center were 180 feet wide.

Departament creates a launch event for the Audi A4 with a "cosmic test drive," featuring virtual reality.

An event for BMW from Departament.

E=MC2 and the Juno Awards

In the hands of E=MC2, Canada's Juno music awards features a custom stage inspired by the theme "amplification," and includes visuals of speakers, amp cabinets, sound waves and ripple affects.

At the 2015 Teddy Bear Affair, guests were treated to a live performance by solo artist Selena Evangeline, accompanied by renowned singer Jackie Richardson, a 12-person gospel choir and the soul-inspiring addition of a 140-person choir comprising members of the George Randolph Academy for the Performing Arts--thanks to E-MC2.

A launch for the Smart car by Eventum Premo has an interactive presentation with robotic hands and plasma screens interacting with the cars.

Eventum Premo and 20 years of Oriflame

Eventum Premo creates a 20th anniversary celebration of direct sales in Russia for Oriflame, with a "break the rules" approach that puts the guests in the middle of the event via a panorama display and 360-degree video.

Feats and the Duke Road Show

Feats turns the dramatic but cavernous National Building Museum in Washington into a festive cabaret-style destination for more than 800 alumni and friends of Duke University who turned out to be inspired by the latest faculty research and innovation in Duke’s "Ideas That Move the World Forward" campaign event series.

The New York Public Library was anything but hushed when more than 500 alumni and friends of Wake Forest University came to share in celebrating the impact of a Wake Forest education on their lives as part of Wake Forest’s "Wake Will" campaign event series--an event created by Feats.

Index helps the Bangkok count down for New Year's Eve.

Index helps an insurance company with a meeting for 30,000 staffers.

Index and the Thailand Pavilion

Index designs the Thailand pavilion for the World Expo in Shanghai.

GPJ designs and executes a product launch for two new Gulfstream jets by creating a surprise “reveal” in a redesigned aircraft hanger.

For client Fiat Chrysler, GPJ finds a unique and entertaining way to link the seven FCA brands in one huge space using 32 distinct content zones, more than 10,00 square feet of video surface and more than 40 miles of lighting and AV cabling to create a massive spectacle on the auto show floor.

To help promote FOX Sports coverage of the 116th U.S. Open, a realistic albeit miniature recreation of the third and fourth holes at Oakmont along with the famed “Church Pews” from the iconic golf course were constructed at the FOX Studios in New York by JHE Production Group.

EventWorks creates a party in an open field

EventWorks designs a custom stage and fire pit in an expansive field on 37,000 acres near the Blackfoot River in Montana as part of a three-day incentive event.

Guests were treated to a country band performance, dancing under the stars, and custom s’mores around the fire pit after dinner at a 96-foot long imperial table.

From EventWorks, a custom tradeshow booth showcasing UCLA Extension programs at the Dwell on Design conference this summer in Los Angeles.

"Our design highlighted student artwork in both 3D models and flat prints," they say.

LEO and Walmart
Lucy A. Kennedy

LEO Events had just nine weeks to help put together a shareholders meeting for Walmart with some 14,000 attendees. The event featured comedian James Corden as emcee, plus headline talent including Nick Jonas and Katy Perry.

MGM and the opening of the T-Mobile arena

From Next Group, the Nestlé Italiana Sales Convention 2016--an inspirational event that takes the management and the salesforces to the Altec (Aerospace Logistics Technology Engineering Company) to teach them how to go beyond their limits.

The plenary session takes place in the Mars Room, a perfect reconstruction of the planet, used for simulations and training astronauts

Next Group and a record-setting Coca-Cola bottle

The Museum of Contemporary Art San Diego creates its big "Monte Carlo" fundraiser, this year with a "glamping" theme.

The dinner set-up on the MCASD’s parking lot, with a 23-foot teepee. All decor is from Pacific Event Productions.

Ruby J Events calls this image '’the calm before the storm," with 300 chairs set before the bridal party and guests arrive for this beautiful wedding.

Also from Ruby J, a corporate event at the Intrepid Sea, Air and Space Museum in New York.

PPW and the NFL Tailgate Party

Party Planners West shares its work on the NFL Tailgate Party, with support from Adam Kaplan and AG Light and Sound.

From Party Planners West, the team area inside the NFL Tailgate Party, with support from Adam Kaplan and AG Light and Sound. 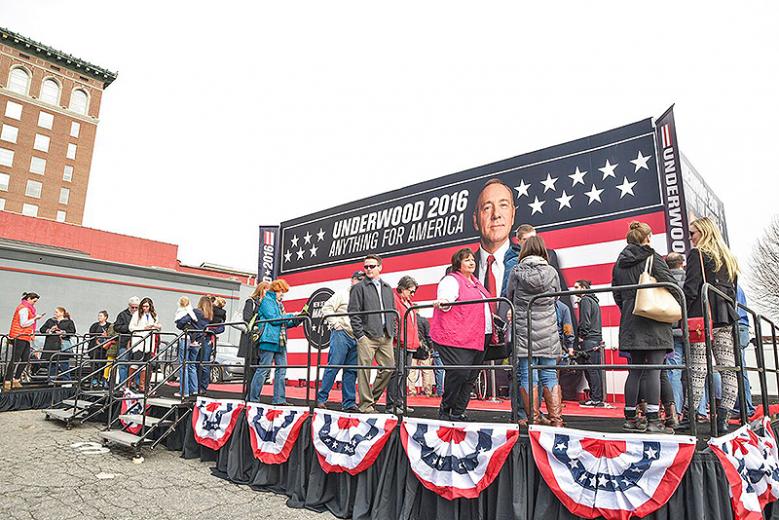