ADVERTISEMENT
Entering via the hidden driveway

For this opening, the place to be seen in Austin was The Bowie--the new gold standard in luxury living. The grand opening was staged on four floors of this 36-story building. Five hundred guests were treated to a taste of “Life at the Top” for four glamorous hours. The high-power guest list included real estate moguls from across the U.S., major investors, the political elite of Austin, press, and, most important of all--the current and future residents. Attendees at “Life at the Top” experienced a combination of urban chic and Austin organic.

Guests then proceeded through a custom entry, which was lined with gray dupioni silk covered in abstract contemporary mirrors that sported the Bowie logo in the center. The walkway was lined with flowers and oversized mother of pearl floor lamps, which were also branded with the Bowie logo.

The walls were lined with geometric mirrored tables with 7-foot-tall contemporary florals spaced throughout.

In the lobby, jazz harpist Rizpah--who has played Carnegie Hall multiple times--greeted guests with a sassy, sophisticated performance that set the upbeat jazzy tone for the evening.

The perfect pair of cheese and fruit

Custom-made wooden slabs with an array of artisan cheeses and fruits served as the Austin juxtaposition to the mirrored glamour.

Chefs explained the nuances of the local cheese andwine pairings. Guests also had the opportunity to sample beer from local breweries, and were asked to pick their favorite “Bowie” under portraits (created by a local artist) of Texas hero Jim Bowie and mega star David Bowie.

The future residents proceeded through the lobby towards the elevators.

When the elevator doors opened to the fourth floor, guests were greeted by sexy gold painted Bowie girls with gold guns--representing the modern “Jim Bowie” spirit of Texas.

"These ladies were a huge hit with attendees and proved to be a huge photo opportunity," the WR team says.

Guitarists on the fourth floor

Entertainers on the fourth floor.

Also on Four: a photobooth.

A view of the nice bites on the fourth floor.

Up to the 30th floor

On the 30th floor of the Bowie, guests encountered the communal indoor/outdoor entertainment space for residents.

The mayor of Austin commissions the building

At twilight, aerialists descended from the 36th floor to the 30th floor. They performed a custom-created piece and repelled to the music of David Bowie’s “Major Tom.”

There were three performances throughout the night interspersed with video projections on the wall of the David Bowie concerts.

Up on the 36th floor

The starry night culminated on the 36th floor, where the view is spectacular. The pool area (which is the highest in Texas) provided the perfect finale.

Band on the 36th floor

The band on the 36th floor.

Guests dance under the stars

Guests dance under the stars.

The team from Wilkinson Rhodes accepts its 2016 Gala Award for "Life at the Top." 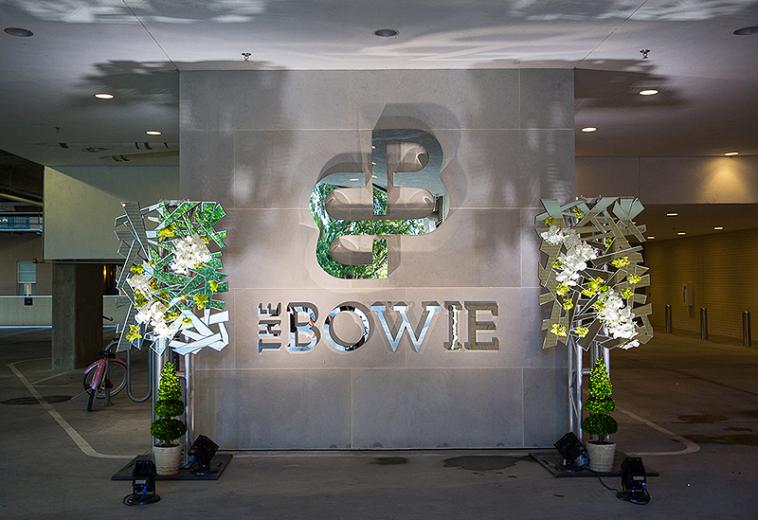