Thousands visit the interactive art exhibit Future Sensations over eight days in Philadelphia thanks to the work of ACCESS.

Here, one of five multi-sensory, interactive, 50-ton art displays constructed to celebrate the client company’s 350th anniversary, thanks to work from ACCESS.

Vocalists included top 10 performers from both "American Idol" and "The Voice," while the cast of 20 dancers was made up of all local Colorado talent.

Before the doors opened, performers came to life as a rock battle started in the foyer between the women and men to “We Will Rock You.”

As guests entered the ballroom, “We Built This City” was booming from the onstage band and vocalists.

Guests were immersed in the ﬁrst vignette, with the rock cast/dancers spread throughout the room and launching into a high-energy rock battle as the song transitioned to “We’re Not Gonna Take It!” thanks to AXS.

Vignette two continued the theme of rock mash-ups with a rock vs. rap battle in both song and dance.

After a few exchanges, all performers came together for the ﬁnal moment as “I Love Rock 'N’ Roll” brought the performers and audience together on the dance floor and had everyone rocking all night long, the AXS team says with pride.

Higher education meets the glamour of Hollywood at this gorgeous event at Paramount Studios.

Los Angeles-based Bixel & Co. produced this event for a world-class university, with the goal of capturing the essence of Classic Hollywood.

California meets the French Riviera thanks to Bixel and Co.

This "California chic" beach bash from Bixel and Co. mirrors the French Riviera.

Clients enjoyed aperitifs and seafood specialties while relaxing on the beach.

Stunner for a start-up

This event was held at the Four Seasons Los Angeles for a high-end local start-up company.

"Creating sheer elegance was the objective of this function," the Bixel team says with pride, "and we have produced three events for the client since."

MC&A lights up the night

Honolulu-based MC&A puts a twinkle-light canopy over a President's Club dinner at the Grand Hyatt Kauai.

MC&A creates a retro vibe at this welcome party with vintage surfboards and Hawaiian postcards at the Four Seasons Hualalai.

Overview of four waves of an incentive program with a retro theme from MC&A.

Minneapolis-based MetroConnections stages a gala dinner where aerialists take to the stage to add awe and excitement.

MetroConnections treats all guests to a front-row seat

Additional on-site video services allow the entertainment to be seen by all at the MetroConnections gala.

Stair decals and organizational branding create a unique “welcome” for international attendees at an event from MetroConnections.

The MetroConnections transportation team services nearly 2,000 attendees for a conference in Vancouver, B.C.

Falconry fun thanks to Spectra

As part of a Scotland country house activity day, guests enjoy a falconry experience close-up thanks to the team from London-based Spectra.

Spectra takes over The Shard

Spectra brings in "Super Hoopers" to entertain guests at the contemporary space The Shard, with its amazing views above London.

Spectra treats a lucky few to a gala dinner in the Tudor Great Hall of Hampton Court Palace. 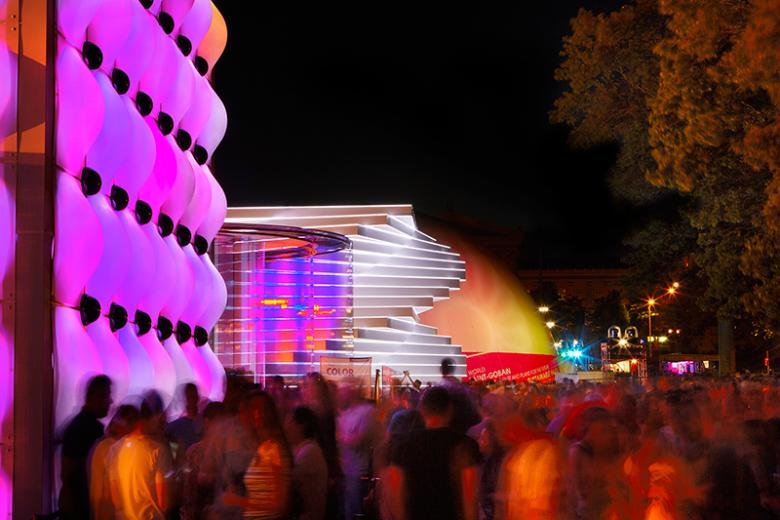