As guests drive up to the valet station, they find the front of the country club awash in blue light.

Both sides of the country club entrance are decorated with candle-lit boxwood hedges and two large floral letters "K," the initial of the guest of honor.

As the guests enter the foyer, they are met with four 15-by-11-foot walls created using photos of the guests along with the guest of honor, reflecting how each guest had played a role in his life.

Escort cards on the tree of life

Each escort card provides the guest’s table assignment and a meaningful quote about life. The cards also share an appointment for a photo shoot.

The country club’s wait staff attire included navy blue ties with “To Life!” silk-screened on them.

Actors, hired as wait staff, are dressed in 1960s “country club” inspired outfits. This decade was chosen because it is one of the guest of honor’s favorite periods of time.

Tomato soup was served in a tall shot glass with a lobster grilled cheese wedge, with the shot glasses lined up in circular holes of a custom crafted wooden carrier that spelled out "To Life.”

Ballroom in blue, gold and white

After cocktails, guests enter the ballroom to find a decor scheme of blue, gold and white.  A mixture of long, round, and square tables is arranged around a dance floor and central stage.

A major focal point in the room was the ceiling treatment sweeping over the entire dance floor.

Thousands of strands of gold threaded confetti suspended over the guest’s heads throughout the ballroom. Nestled within the confetti hung several bubble bowls with candles to add a soft effect for lighting the dance floor.

The natural movement of each strand coupled with the dramatic lighting produced a magical effect.

A geometric arrangement of floral in a glass orb.

Many of the centerpieces consist of traditional gold candelabras with a unique spin. Instead of incorporating candles in the conventional fashion, the event team used an inverted lampshade adorned with oversized gold confetti.

Another centerpiece consists of two gold vases outlined with a shape patterned after an “O” with white Phalaenopsis orchids cascading down from the opening of the vase.

Guests order as they choose

For their meals, the guests are able to order off the menu rather than have a pre-chosen entree, usually unheard of at an event of this magnitude.

A special staff member, one per table, was brought in to service the guests for beverages only. While the country club waiters were dealing with the food service, this team focused completely on giving each guest extra special service to enjoy the entertainment so they did not miss anything during the performance by walking to the bar.

At the end of the evening, when the valet delivered their cars, each guest found a bottle of wine with a custom label in the front seat, and a handwritten note thanking them for attending. 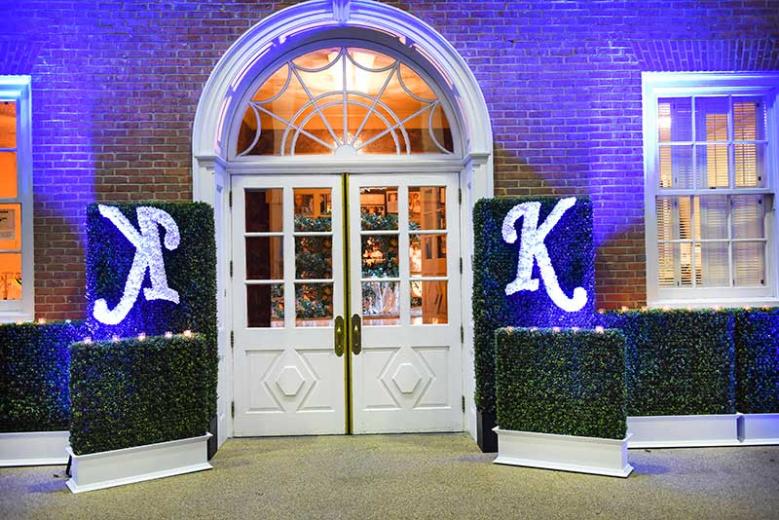 Next Up
Design Gallery 2017: Six Stunning Vignettes at The Special Event
Start Slideshow ›