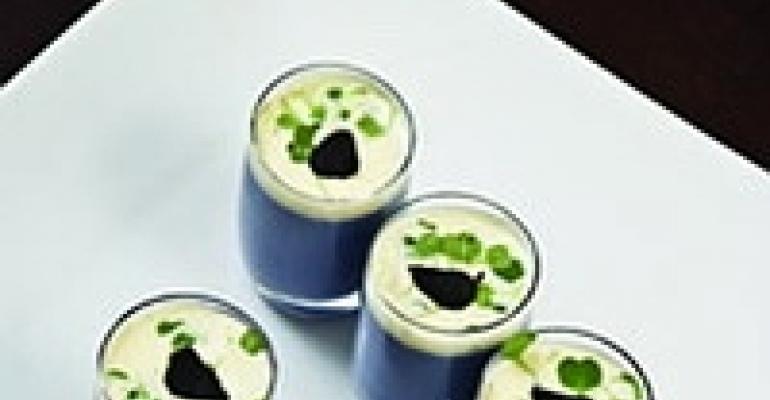 The four ingredients below may not be new — some have been around for centuries — but they are likely to create never-seen-it-before buzz. Exotic and obscure, these flavors will lend a certain mystery that leaves guests not knowing what hit them, yet still wanting more.

Striking in color and Gummi Bear-like in texture, black garlic offers a toned-down garlic flavor despite its dramatic look, notes chef Charlie Giordana of Duvall Catering & Event Design in Charleston, S.C. Made by fermenting whole cloves of garlic at high temperatures for one month, black garlic has an “almost candy-like flavor,” similar to European licorice or balsamic vinegar with hints of molasses, Giordana says. The ingredient is popular in Japan, China and Korea, and recently has made its way to California thanks to the Hayward, Calif.-based company Black Garlic.

Giordana makes use of this find in his purple potato vichyssoise with goat cheese cream, micro arugula and black garlic chips (see photo above), which look, he says, “like shaved black truffles” and give the soup an earthy note.

This berry, found on bushes growing wild in the Middle East, is “tart and somewhat sour,” according to Patrick Cuccaro, general manager of Affairs to Remember Caterers in Atlanta. You can get it in dried berry form, but Affairs to Remember buys it ground to make a sumac-chile crust on Pacific halibut paired with a lemon- and mint-flavored grilled zucchini and pear tomato salad. “The sumac enhances the satisfying astringency of the salad, balancing it with the luxuriousness of the fish,” Cuccaro notes.

And be on the lookout for more dishes with Middle Eastern flavors — but made with shorter ingredient lists, Cuccaro says, as everyone becomes more cost-conscious.

This organic rice comes from Italy, where it is aged for one year in temperature- and humidity-controlled steel silos, says creative services manager Sarah Finlayson of Chicago's Blue Plate Catering. An excellent rice for risotto, the grains absorb more cooking liquid than the average rice, making them bigger and firmer, not to mention less likely to stick together.

Blue Plate uses the rice in its black truffle risotto. “The rice adds to the creaminess in texture while still maintaining an al dente bite and a more pronounced rice flavor,” Finlayson notes.

Originally from Japan, this tiny tuber made its way to France in the late 1800s, where it was named for a French town renowned for growing them. A crosnes is “small and resembles a bloated caterpillar, has a crunchy radish/potato/apple-like texture, and can be used in much the same way as sunchokes,” says Richard Mooney, president and CEO of Los Angeles-based Kensington Caterers.

Mooney's team lightly blanches and dices crosnes to use in an Asian duck salad appetizer with napa cabbage, pickled ginger and carrots dressed in an orange sesame oil and soy sauce vinaigrette. He notes, “The addition of the crosnes essentially adds texture and, of course, a note of mystery.”