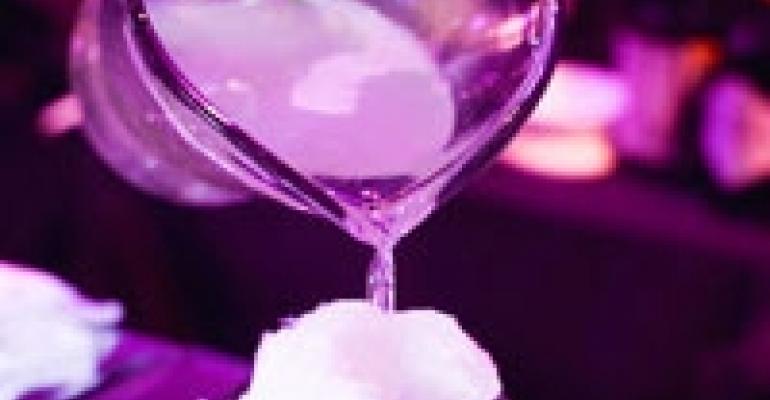 From cotton-candy mojitos at 5 to gourmet grilled cheese sammies at midnight, caterers tell us what&#8217;s on the menu for each course of the wedding reception.

From the first cocktail to the after-party eats, Special Events looks at wedding reception course by course.

Adding a decidedly DIY touch to the cocktail hour, infusion bars, which allow guests to customize their libations, are a big trend among the wedding crowd, according to Morgan Bedore, vice president of sales and creative development of Stephen Starr Events, Philadelphia and New York. “They allow people to tailor their beverage to their taste, and encourage connection and conversation,” she says. The company’s signature bar features teas, herb-infused simple syrups, house-made Italian sodas in apothecary-style jars, and recipe cards. “Guests are encouraged to try existing recipes or come up with their own flavor combinations,” she adds.

When is comes to wine, wine-tasting receptions—complete with custom wine labels and corks—go hand in hand with the rustic elegance theme popular among today’s brides. And they work especially well when the wedding is held at a vineyard. “The cocktail hour unfolds in the wine cellar and guests are invited to a private wine-tasting,” says Cheryl Fish, vice president of design services at Someone’s in the Kitchen in Tarzana, Calif.

For spring and summer weddings, soup’s on—on ice, that is. “Chilled soup stations--with large-footed silver compotes filled with seasonal chilled soups and accompanied by assorted toppings on a silver stand--are ideal for both savory soups as first course or fruit soups for dessert,” Bedore says. Favorites include white gazpacho with green garlic, green grapes and toasted almonds; classic tomato gazpacho with grilled shrimp and cilantro oil; and yellow grape tomato gazpacho with micro basil and charred eggplant. “The possibilities are endless with it comes to flavor combinations,” she adds.

The cross-cultural cooking trend shows no sign of slowing down. “Fusion cuisine is still trending, with Latin American and Asian flavors our most popular combination,” says Brianna Alcorn, marketing director for Windows Catering Co. of Alexandria, Va. She singles out Asian, Latin, Korean and Portuguese dishes as hits with clients, adding that paella as an oft-requested Latin dish.

Turning the ubiquitous cupcake on its end, Stephen Starr Events’ oh-so-clever "cake-in-a-cup" takes the cake for creativity. “It has replaced the cupcake as the trendy way to serve wedding cake,” Bedore says. Individual cakes are baked in mismatched vintage teacups for a whimsical effect or, for a classic look, uniform mugs in colors that complement the wedding’s overall theme. “Having individual cakes also allows for flavor variation," Bedore says. "It’s a cool effect that’s just recently becoming chic.”

Dessert stations featuring one-bites, assorted finger sweets, themed candies, and cake pops are another sure bet, according to Amanda Weidel, event production coordinator at Neuman’s Catering, New York. “We see more of this presentation than a table with one big cake on it,” she says. “One-bite desserts allow guests to try a variety of flavors without getting too full and to grab a quick bite in between dancing and mingling.”

The go-to late night snack trend for 2012—the grilled cheese sandwich. “But not your old favorite,” Alcorn stresses. Meat and cheese combos such as such as slow-cooked short ribs with fontina cheese, duck confit with Brie, and Maine lobster with Gruyere offer an upscale alternative to the traditional American on white.

Since the bride and groom rarely get a chance to eat a full meal, Neuman’s sends the newlyweds off with a custom-made couple’s basket at the end of the night. “It is filled with all the goodies they may have missed throughout the evening,” Weidel says.

TO SPLURGE OR SKIMP?

Splurge on: Service! “Splurging on food or beverage will be useless if there aren’t enough servers to circulate the food to all of your guests, or if the expensive food is presented in an unappealing way,” Bedore says. “Even the most simple, home-style food seems elegant when served and styled well, so splurging on service is a must.”

Save on: Simple menus, well prepared. “The robust flavors of Southern food prepared with a modern flair make for delicious, affordable cuisine,” Bedore adds, noting the influx of high-style Southern restaurants in New York has influenced this culinary trend. Down-home favorites such as barbecue chicken, cornbread and grilled pimento cheese sandwiches are just a few examples of menu items that keep the style and flavor up, while keeping the cost down.--Stephen Starr Events

Splurge on: Dessert! “Dessert is still an affordable luxury and it will always be expected to be a showstopper at the end of the meal and associated with the way we celebrate,” Alcorn says.

Save on: Let 'em stand—at least a few of them. “When having a buffet or food stations, partial seating will help cut down on equipment costs,” Alcorn adds. Also, she recommends shorter cocktail hours to keep budgets in check. --Windows Catering Co.

Splurge on: The bar! A good martini bar with signature cocktails and a nice variety of after dinner drinks is a must, according to Fish. Some showstoppers: The "magic mojito," which is shaken, not stirred, then strained and poured over cotton candy; and an after-dinner coffee spiked with chocolate and hazelnut liqueurs, topped with steamed milk and embellished with a cocoa powder stenciled heart.

Save on: Fish recommends using fresh flowering herbs as often as possible as an inexpensive yet elegant plate garnish. Another tip: creative--and compostable--serving ware. “We’ve filled carved-out baby pumpkins with squash ravioli for a spectacular first course,” Fish says. “It’s all in the detail, not in the cost.” -- Someone’s in the Kitchen

See the full story in the March-April issue of Special Events.