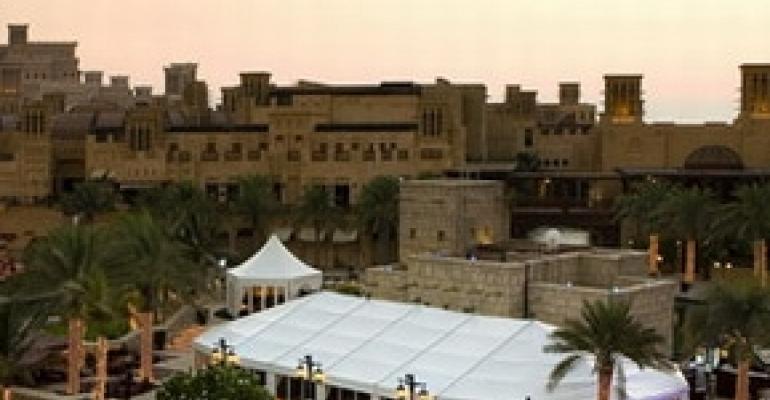 There are venues for parties, venues for sacred ceremonies — but what about a venue for both? That is the triumphant achievement of Harlequin, the tent and event services company based in Dubai, United Arab Emirates. The tent the team created — a 12-by-12 meter (40-by-40 foot) structure with a 6-square-meter (65-square-foot) conservatory — served both purposes. The structure has been honored as a Gala Award nominee (see page 25).

The tent was commissioned by Jumeirah, the Dubai-based hotelier, as a site for the faithful to convene at the resort Madinat during the holy month of Ramadan, October of last year. Set in the middle of a man-made fort, the majlis tent “was the highlight for the entire month of the breaking of the fast at sundown,” says Carmen Clews, Harlequin managing partner. “It soon became one of Dubai's most popular venues for this religious tradition.”

The majlis offered floor-to-ceiling window panels, giving a view of Jumeirah's seven-star Burg Al Arab hotel. A fiber-optic ceiling was covered in “stars,” giving the impression of being under the Arabian sky. The private, air-conditioned hexagonal conservatory, available for corporate functions, featured a romantic interior including hookah pipes and a private butler.

Despite its panoramic views, the structure had to be shoehorned into its space. “Carrying flooring, carpeting, tentage, star-cloth, furniture, 10-ton air-conditioning units and lighting from the nearest point for vehicles and then over a narrow bridge during temperatures of up to 40 Celsius [104 Fahrenheit] was no mean feat,” Clews says. “We managed within 1 inch to accommodate the 12-meter-by-24-meter [40-by-79-foot] classic marquee between lamppost and wall!”

The Philadelphia Academy of Music was not only marking its 150th anniversary with a fundraising gala, but had Charles, the Prince of Wales, on hand to boot. His Highness' star power helped boost the guest count to more 2,500 despite the chill of the January event.

Landsdale, Pa.-based EventQuip rose to the challenge, taking over Philadelphia's main artery — Broad Street — as the event venue for the seated dinner party. The traffic-stopping event site further raised the public profile of the event.

To create the “Broad Street Ballroom,” the EventQuip team worked within a tight 10-hour window — from 11 p.m. Friday to 9 a.m. Saturday — to install a 2-foot-high leveled floor, a 40-by-145-foot Aztec Jumbo Trac frame tent with a clear middle section, and various support tents. The intricate load-in required a highly choreographed installation schedule whereby each of 11 trucks was loaded in a precise order and scheduled to reach the job site based on a specific parking location. “Loading and coordination took longer than the actual installation,” notes EventQuip chief Edwin Knight, “proving that the time invested prior to the job was crucial to overcoming the time challenge.”

Lexus dealers are accustomed to the best, and that's what they expected at their national dealer gala, held last October in Chicago. McCook, Ill.-based Chicago Party Rental was up to the job, installing more than 75,000 square feet of climate-controlled structures for the event, held at Chicago's landmark Buckingham Fountain. The project has been honored with a Gala Award nomination (see page 25).

CPR installed the structure — which included a reception area, a showcase area for 2008 Lexus models, and a dining tent for 1,250 seated guests — in two 12-hour shifts. In this case, time really was money; “The rental fee for the fountain area is $25,000 per day!” explains CPR's Valerie Braun.

The circular fountain area left no room for a normal installation, so the last three sections of the 164-by-148-foot dining tent had to be flown over the fountain. To squeeze in a 72-by-72-foot revolving stage, CPR built a 100-by-82-foot structure directly underneath the end of the 164-foot tent, linking the two tents with a custom vinyl gable.

With bad weather in the forecast, the event team added a 33-by-50-foot entrance tent and lined up both air-conditioning and heating units, which looked fine with the white reception tent but clashed with the black liner of the dining tent. The CPR team scrambled to design, fabricate and install a black facade over nine HVAC units in less than 24 hours.