Rendez-vous Canada is a premier international tourism marketplace conference and as Vancouver was the 2014 host city, Destination British Columbia and Tourism Vancouver came together to host the all-delegate event “BC/Vancouver Night--Show Us Your Adventurous Side.” The E=MC2 team transformed an exhibition hall into an outdoor experience, thanks in part to 3,400 square feet of video walls.

A 150-foot aerial line took West Coast athletes from each end of the room over the heads of guests; skiers, surfers, snowboarders and kayakers zoomed across the room, while massive scene-scapes appeared on the walls, matching their sport.

A 50-foot 'B.C. Adventure' sign hung over the stage, with mountaineer rope extending back to the mountain bike zone. The sign was the anchor to the event and tied all theming of the action, decor and design together.

The event space was divided into six cohesive regions of B.C. and the lower mainland with the strategic placement of decor and food stations. Highlights included Chinatown, which served up dim sum, noodle boxes and moo shu pork under a replica of the Vancouver Chinatown gate.

A full-size RV acted as an additional themed lounge with faux fire pit and Adirondack chairs. Next to it, the BC Slider Station food truck trailer serving up a variety of sliders in the Stanley Park-themed area.

Giant mountain bike aerial jumps and ramps were installed behind the main stage, acting as the feature set behind stage performances.

A biker shows his stuff

A professional biker shows his stuff.

A life-size grizzly bear (which formerly appeared in commercials for international mega brands)--complete with animatronic head features and growling sound effects--'foraged' in the forest before posing for photos with a fly fisherman comic character and guests.

Two themed, interactive photo stations on either side of the room had guests lining up for pictures with comedic Canadian characters. Scenes included Whistler Mountain and Lions Gate Bridge.

The 'river of salmon' in the First Nations area.  As guests stepped close to a fish, it would swim away--to the bear’s dismay!

The guests react with joy.

And to close, The Famous Players Band took over the stage after Bollywood, performing classic hits that had partygoers dancing with shoes in hand. 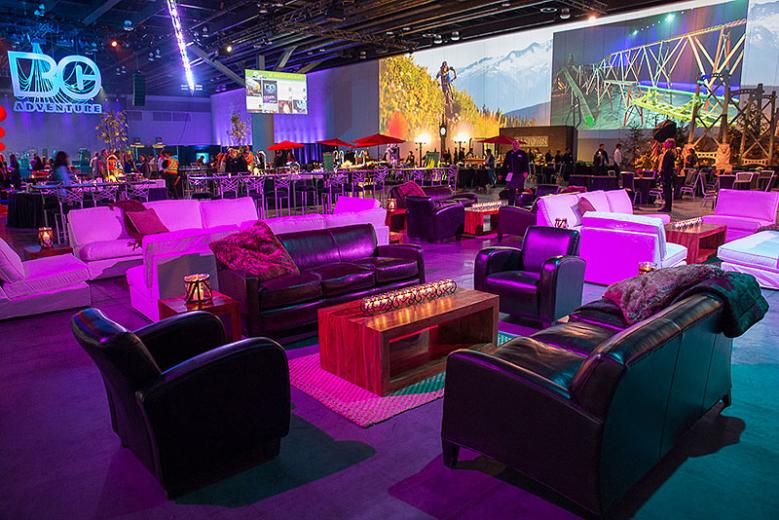 Next Up
Shining a Light on Pantone’s 2021 Colors of the Year: Ultimate Gray + Illuminating
Start Slideshow ›