The event, held at the company headquarters, featured Decor and More's own version of the red carpet--here in gorgeous purple, from Reznick Carpets.

A full scale summary of Decor and More's history is captured on an oversized timeline, highlighting some of the biggest moments of the company.

The Kohl Children's Museum celebrates turning 30 with a stylish celebration.

The 450 guests have the chance to pose for photos.

All told, the event raised more than $700,000 to support the museum's educational programming, exhibits, services for children with special needs, and outreach to low-income communities.

The evening began with a cocktail and hors d’oeuvre reception in the museum’s exhibits and the opportunity to bid on luxurious silent auction items.

The night continued with dinner, dancing, and a short program honoring the Museum’s Founder’s Circle in a special tent constructed adjacent to the museum.

Who really knows how to throw a party? A caterer--of course--and iconic D.C. caterer Occasions Caterers shows how it's done with its own 30th anniversary party, at the historic Smithsonian Arts and Industries Building.

The celebration was held at the historic Smithsonian Arts and Industries Building.

Here, a lush, over-the-top, white floral centerpiece by Amaryllis Floral and Event Design, which stood at the center of the space in a large black urn.

At the wine and cheese pairing station, a sommelier pairs wines with each of the cheeses for guests.

At the party site, on the 14th floor of the event venue, guests were greeted with 20-foot floor-to-ceiling windows reflecting the soft glow of 10 glowing crystal chandeliers, which had been hung from the ceiling. The goal of the event team: to create a pink event that was sophisticated, versus the look of a Super Sweet 16 party.

Set atop a 48-inch round table, covered in a custom black lace linen, sat a six-layer birthday cake in shades of pink and red. Adorning each layer were candy flowers and lips as well as white and black ruffles, which added texture and interest.

A 6-foot chandelier was poised above the cake, acting as a glittering cake topper. Atop the table were gunmetal gray mercury glass votives with flickering candles, which gave the table even extra punch.

At the front of the dance floor stood an 8- by 9-foot lighted acrylic DJ booth complete with a giant “kiss,” inviting guests to dance the night away.

The floor plan was designed to facilitate ease of access to food stations while offering guests an array of seating options including the lounges, modern white tufted leather banquettes, high top tables, and traditional table seating. White floor-length linen served as a background for navy blue striped or chevron overlays.

A closer look at lounges.

A dance team takes the floor to celebrate the honoree.

The cocktail hour takes place in an elegant space featuring soaring arches. The building opened in 1924, founded by Charlie Chaplin, Rudolph Valentino and Cecil B. DeMille.

A pretty bar in the main event space.

Marking a half century, Caesars Palace Las Vegas celebrated its 50th anniversary on Aug. 5--exactly five decades from the day it first opened its doors--with a special birthday pool party with nearly 3,000 hotel and special guests.

Here, a lighthearted take on the Julius Tower at the property.

Cocktail servers dressed in bubble costumes pour glasses of champagne for guests, surrounded by special lighting and an art display with ping pong balls in the Neptune Pool.

A gala that told the story of the first 50 years of the Museum of Flight in Seattle treated 800 guests to an array of aviation stars, from military heroes to airplane designers to Apollo 8 astronaut Bill Anders, thanks to the team from Tolo Events.

The event was honored with a 2016 Gala Award nomination from Special Events.

Here, the famed Harry James Orchestra at the event entrance.

The stunning tent is fully surrounded in 16-foot-tall cream drape and offset with a red, gold, and black color scheme that took the feel of the environment back to the glamor days of Old Hollywood, complete with tiered platforms 27 feet wide by 72 feet long and 30 feet high that allow a great view of the stage.

Guest tables are dressed in a variety of gold and black textured linens that alternate throughout the room, surrounded with chiavari chairs topped with black cushions.

Everything's bigger in Texas, including this "Outlaw Country" 50th birthday party from Elias Events for a huntin', fishin' man's man.

The venue offered plenty of space but no focal point. To rope it in, the event team designs a huge rope chandelier.

The perfect cake: a salute to hunting and fishing.

Tablescapes include rustic accents such as lanterns and sayings that reflect the guest of honor's philosophies.

Gifts for guests include a logo'd lighter, shot glass and koozie.

Some 500 guests from throughout the globe helped a couple commemorate 60 years of marriage with the theme of "nature" used throughout the three-day/four-night celebration. Events included a dinner on the sprawling lawns of the couple's residence in New Delhi, where the central tree—known as the Speaking Tree—was used as a canvas, while projection mapping brought the façade of the residence alive.

The beautiful view at night.

Something New Events helps a family honor its patriarch on his 80th birthday with a stylish event for 275 guests at a country club. The Special Events Advisory Board just celebrated the event by honoring it with a Gala Award.

As guests drive up to the valet station, they find the front of the country club awash in blue light.

Both sides of the country club entrance are decorated with candle-lit boxwood hedges and two large floral letters "K," the initial of the guest of honor.

Each escort card provides the guest’s table assignment and a meaningful quote about life. The cards also share an appointment for a photo shoot.

After cocktails, guests enter the ballroom to find a decor scheme of blue, gold and white.

A mixture of long, round, and square tables is arranged around a dance floor and central stage.

Linder Global Events supports Trust for the National Mall at the ninth annual benefit luncheon to celebrate the centennial of the U.S. National Park Service.

Some 700 guests--made up of many members of congress, Washington dignitaries and friends, and supporters of Trust for the National Mall--were welcomed into the Congressional Reception, co-hosted by Senator Cory Gardner and Representative John Lewis, to enjoy spring inspired cocktails and hors d’oeuvre.

Despite heavy rain outside, guests were surrounded by a perfect springtime day inside the luncheon tent, seated at tables adorned with tulips beneath a canopy of pastel kites.

A cupcake from Rare Sweets salutes the NPS 100th.

Place cards encourage guests to text in pledges for the Trust for the National Mall.

The San Diego Zoo Global roars at its stunning 100th anniversary thanks to help from the team at Mark Joseph Creative.

All of San Diego was invited to the May event, which honored the founding 100 years ago of what is now San Diego Zoo Global, the organization dedicated to end extinction of animals, plants and habitats.

The speakers shared the stage with three large gift boxes that were delivered earlier in the week to Balboa Park. When the gifts were opened, they revealed an "Asian elephant," a "California condor" and an "African lion" (in photo above)--all amazing puppets.

​Beautiful projections on the façade. 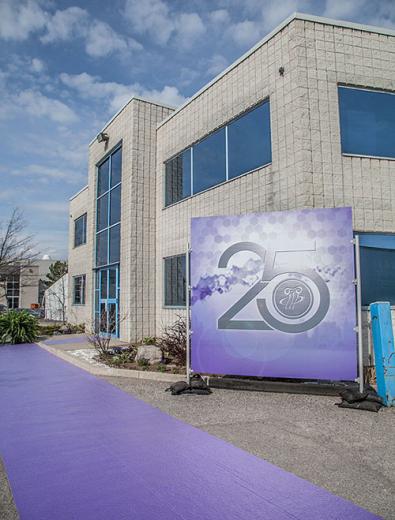 Next Up
Safety with a Side of Whimsy
Start Slideshow ›