Renowned for the level of care and attention shown to their customers, company employees themselves were treated to a memorable “A Night in Oz” show that included a multi-act theatrical production, live band, DJ and dancing.

Many guests came dressed in theme costume and everyone experienced an event full of wonder, spectacle and whimsy.

A longer view of the dining area.

The venue: the North Hall of the Calgary TELUS Convention Centre in Calgary, Alberta.

An aerial act signals the famous tornado that carries Dorothy to Oz.

And the entertainment begins ...

Due to the video mapping, the four clusters of line array speakers and the aerial act needed to be carefully placed between the video projection paths to avoid casting shadows on the screen.

There were no existing rigging points, so the team engineered a custom rigging solution. To support all of the entertainment, they advanced each act to review their requirements and determine how to integrate each.

With no time to reset in between, they modified the main stage to accommodate two back-to-back musical performances. Similarly, they worked with the client's team to develop the graphics and video content for both the theme and formal program, adapting it to fit the special widescreen video system specifications.

The feat: Synchronization of audio, video and lighting with a multi-act entertainment show supporting a full-scale theatrical production. The accomplishment was impressive considering the 300-plus technical cues--and only one afternoon to rehearse.

Creative lighting was particularly challenging due to variety of stage changes/entertainment acts. For example, the event team needed two sets of looks to help change the room from “good” to “wicked”.

"We repurposed  LED lighting for the stage and dance floor, theatrical performances and as support for musical acts," they say.

Some of the fun.

After the program, best-in-class audio gave a concert feel to the dance party. 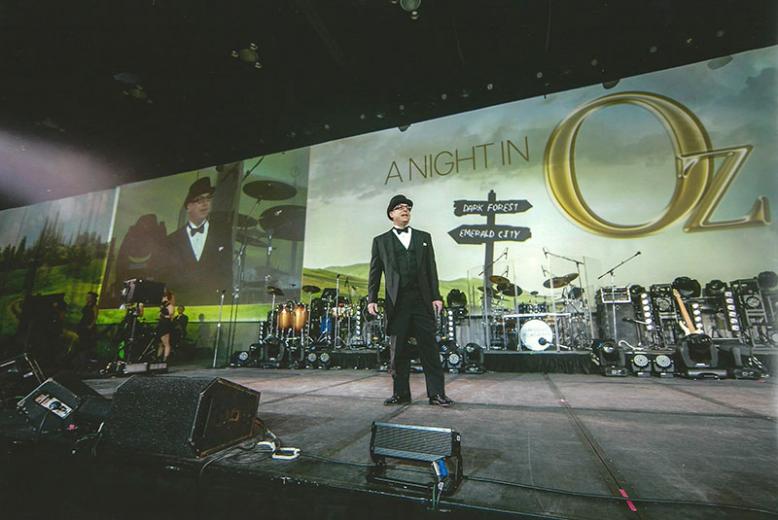 Next Up
5 Occasions for Event Furniture Rental
Start Slideshow ›