ADVERTISEMENT
The entrance to Neverland

Visitors moved through the Commons, an employee incentive food court, and experienced scenes from Peter Pan.

Arranged across the wide-spread building, the vignettes progressively told the story, beginning with the eruption of the Island of Neverland in the reception area.

An 8-foot-tall book featured quotes and art from the original J.M. Barrie story.

Amongst the pages of the storybooks props sat vignettes depicting the home and playground of Captain Hook, Peter Pan and the Lost Boys.

Centered around a mountain of forested terrain, the props included skeletons still guarding their treasure chest of booty, Lost Boys’ lanterns, and seashells and glass baubles from Mermaids’ Lagoon.

A peek at Peter Pan

A peek at Peter

Guests then arrived at the Darling children's bedroom window.

The tattered lace curtains showed where Captain Hook entered the room to spirit the children away.

A silhouette of Peter in the blanket fort in the Darling children's bedroom.

A closer look at Big Ben.

Here was a scrolled letter skewered with a pirate’s sword that read “Wendy, Michael and John have been taken by Captain Hook!” The blanket fort still stood as though they were huddled inside reading a story just moments ago.

Near an overstuffed occasional chair, viewers saw the sewing kit Wendy used to reattach Peter’s shadow and the cabinet where Tinkerbell’s glow flowed out softly from the slightly ajar nightstand drawer.

As guests strolled further down the hallway, they entered the forest of Tinkerbell's flight.

Her fairy lights flitted about the sprawling branches and glowing lanterns fixed in the leafy canopies overhead.

Seven-foot faux trees with gatherings of ferns and greenery at their bases studded the hallway to further submerge visitors in the forest.

The event team could not find fire-retardant fabric for its ivy canopies. Instead, the team worked with the fire marshal to create fabric featuring enough holes so that water from fire sprinklers could flow through it if need be.

A glimpse of Tic-Tock, the famed crocodile who haunts Captain Hook.

Guests could glimpse overflowing treasure chests and the maps that Hook had been studying.

The Lost Boys Hideout sat amid lush foliage of ivy and bamboo.

Here, guests found barrels made into tables, lanterns, weapons at the ready for fighting pirates, plenty of furs to keep the boys warm at night, and a rope ladder for quick getaways.

The stairway hand railing was camouflaged in natural jute netting, and forest vines held in place with strips of animal fur.

A view from above.

On the upstairs landing, guests found the Mermaids' Lagoon--a tropical paradise of lush greenery and cascading waterfalls. Here guests could take photos as they posed behind a mermaid's fins set on faux rocks amid palm trees.

A beautiful 20-foot backdrop set the scene while the foreground featured an abundance of seashells and glass sea floats tucked into a scattering of netting.

Blue uplighting washed over the white satin drape, and the sparkling holographic water-drop curtain to create a waterfall effect.

Nestled under the stairs in a sea of blue satin, the ship rested with a collection of nautical items that included pilings, crab pots, bottles, buckets and crates that marked the dock entrance.

A spooky skeleton onboard.

One objective of the installation was to create family-friendly Halloween decor that was mysterious and intriguing without being traditional and frightening. 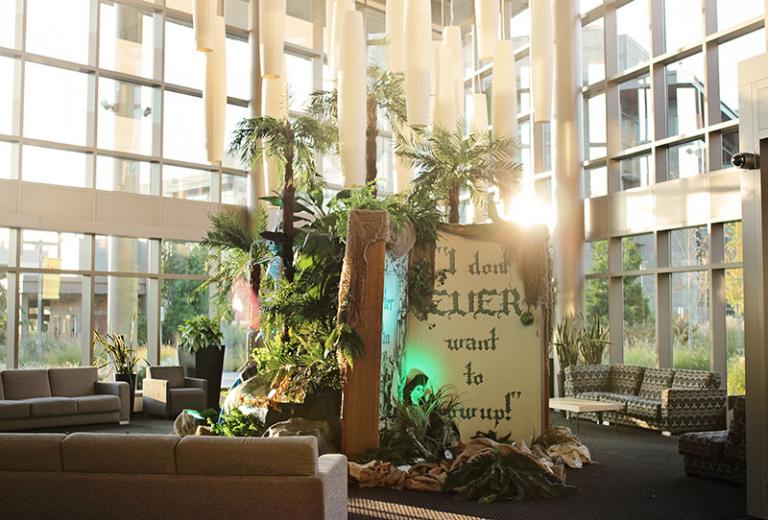 Next Up
Bienvenidos a Miami
Start Slideshow ›