Down the rabbit hole

Guests go down the 'rabbit hole,' an illusion created by panels of drape that are increasingly smaller.

Curiouser and curiouser: A chandelier is made of chiavari chairs.

The dance floor is, of course, a chessboard.

The ballroom was divided into various themed areas. Here, part of the Red Queen's court.

More of the Red Queen's Court, which includes a hedge maze.

A hedge lady in the Red Queen's Court.

Helpful hands reach out to serve guests in the Red Queen's Court.

The White Queen's Court is decked out in white and chrome.

A chandelier in the White Queen's Court.

The hotel's bartenders dress up for the occasion.

The Red Queen herself

The Red Queen herself--who just happens to be a drag queen.

Chess pieces dance with guests. The chess pieces moved on the chess-board dance floor according to the rules of chess--quite a challenge for the knight! 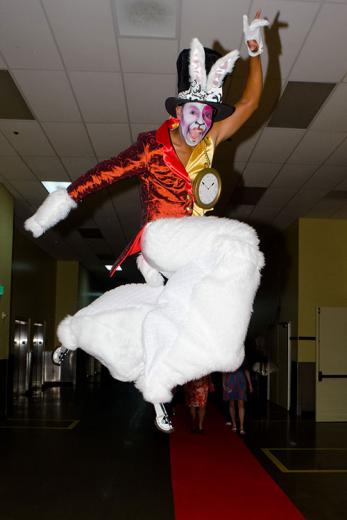 Next Up
A Look at Very Peri: Industry Pros React to Pantone’s 2022 Color of the Year
Start Slideshow ›