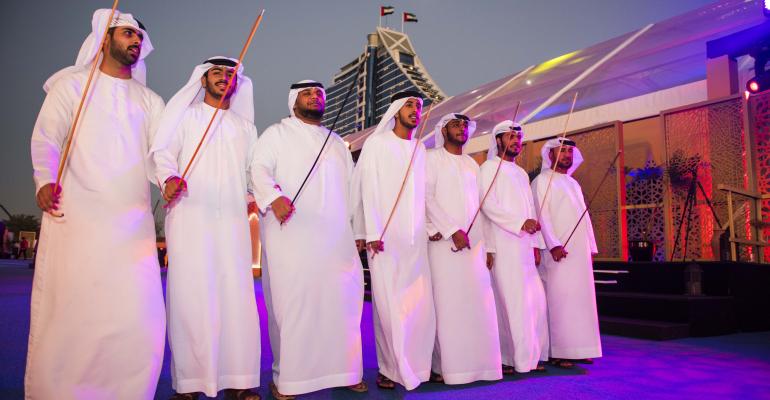 Amway China’s Leadership Seminar and 25th Anniversary, held in Dubai during January 2020, was a three-phase event culminating in a Gala on the final night. The multi-day event, featuring the annual employee reward and incentives portion, was a series of identical events for over 10,000 guests that took place in 8 waves. The program addressed the taste of the Mandarin-speaking attendees while immersing them in the local Arabian culture, leading to the event title “Arabian Nights.”

Upon arrival, guests could get into costume and receive temporary henna tattoos. While there were engaging photo ops and activity stations throughout the event, as well as satellite stages chock-full of entertainment, the main show featured a customized act that required three months of intensive Mandarin language and dialect instruction to achieve flawless performance. Magicians, singers, and several dance troupes led the guests through the evening, climaxing in a PyroDrone pyrotechnic show.

During the span of the event, a record-breaking storm hit the area and the team moved the entire outdoor event indoors, changing venues and redesigning virtually every aspect of the show, and moved it back outdoors again once the storm passed, demonstrating resilience and proving their desire for the event to succeed.

Congratulations to Haute and their production of Arabian Nights: Amway China’s Leadership Seminar and 25th Anniversary!

Throughout the summer, we will be featuring these winners and their spectacular events on the blog, so get inspired and get your event submitted for a 2023 Gala Award!

Read our submission blog post to learn more about submitting your event.

Time Is Running Out! Last Call for Gala Submissions
Dec 06, 2022