Originally planned to be held in the parking garage of the new research campus (with every aspect of the event custom-made), the location changed three days before the event. Because the new space was outdoors and three times as large as the original space, virtually everything had to be re-designed.

The redesigned entrance was now a custom 8-foot-by-12-foot wooden façade replicating the interior of the new building. Once inside the space, the only indication that guests were outside were the stars above.

A mid-century reception area was created: the grass was covered with Baroque brown carpeted subflooring, LED orbs glowed softly over lime green seating. And now that the event was not at the Institute, virtual tours of the new space were arranged in lieu of the originally planned hard hat tours. After enjoying drinks at one of the three 20-foot marble-topped waterfall bars, it was onto the new designed custom dining area.

The now al fresco event also had a new stage designed with three giant LED screens positioned center, left, and right. In front of them was a sea of 4-by-8-foot dinner tables.

Dinner and a Show
AOO Events

During dinner, the reception area was converted to a metallic night club. Gold and orange lighting shot up into the sky creating a dramatic effect for the after party.

Each table had been custom built for this event so that everything, down to the geometric chargers, tied together.

The dance floor was quickly reconfigured in days for the new space. A larger version of the original was made in record time featuring the Institute’s logo within a human blood proteome, a striking design. 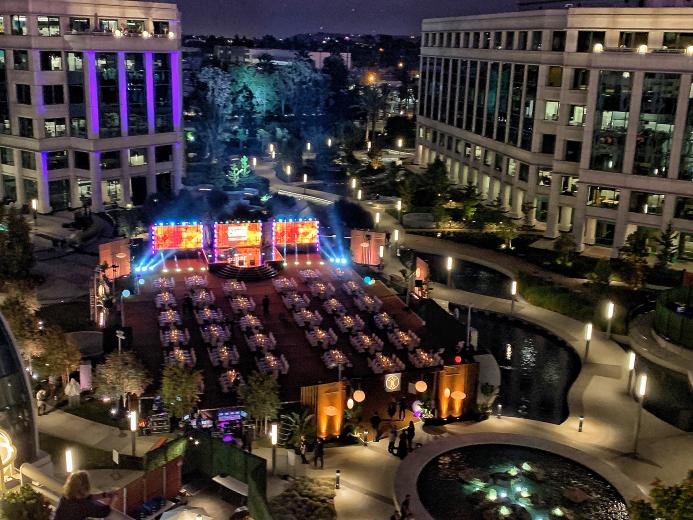 Next Up
And the Gala Award Goes to...Arabian Nights
Start Slideshow ›