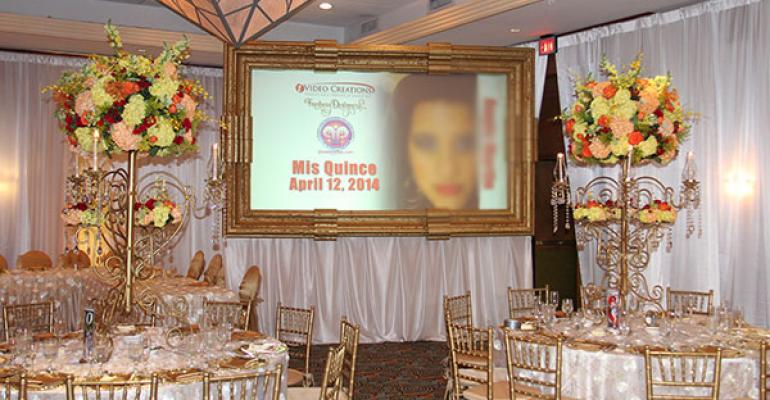 Small fry are big business. The improving economy has loosened the purse strings of clients for children's events. But the hosts insist on getting value for every dollar they spend.

"Demand for our services has definitely improved but the clients are also more demanding," explains Cindy Hassel, president of S&R Originals/SRO Events of Tarzana, Calif., which specializes in bar and bat mitzvahs. "Our clients are still very budget-conscious but they are now willing to add a 'wow' or two--within reason."

Indeed, the fear of even well-heeled clients of appearing too showy during the recession has faded somewhat. "They are still concerned about appearance, but they want some memorable or one-of-a-kind elements," Hassel explains, "such as a custom-styled photo station, the biggest candy station ever, custom logo pillows, etc."

PINING FOR PINS It seems many of Hassel's mitzvah clients have taken a page from bridal couples—a Pinterest page.

"Our bar and bat mitzvah clients always start by telling us they 'want to be different and unique' … then they whip out their Pinterest page on their smartphone," she says. "I had three clients in one week bring me the exact same Pinterest image. I’m beginning to believe Pinterest is the main force driving bar and bat mitzvah event design." Certain themes stay strong, Hassel says, such as sports themes for bar mitzvahs, pretty and "modern feminine vibes" for bat mitzvahs, along with standbys such as "Broadway," "Hollywood," "beach," "travel" and "candy."

Indeed, themes remain such a driver at children's events that "I would say nearly 99.9 percent of the time with a children's event, we start with a theme and go from there," explains Emily Tolve, account executive with Denver-based Newberry Brothers. Pop culture is a strong influence, she says, such as the bold colors and candy accents in the videos of superstar singer Katy Perry, as are the child's own extracurricular activities.

But while recent years have seen girls go for candy themes and boys for sports themes, "There are kids bucking the gender trends," Tolve adds. "We have an upcoming bat mitzvah and the girl loves [TV crime drama] 'CSI.' So we're getting to branch out and use evidence bags, thumbprint prints, beakers, etc."

GOING ABSTRACT But several children's event pros say that strong themes are being scaled back.

"Themes are not as big as they used to be," claims Cara Weiss, co-owner and partner in Save the Date, Rockville, Md. "Much more popular are logos or initials that are attractive fonts that market the party and give a theme to the look." If there is a theme, she says, "It is only slightly represented."

Weiss notes that one of her recent mitzvahs was a hit with guests thanks to "different, fun" elements such as food displays suspended from the ceiling and CORT's Blofield line of inflatable furniture. Instead of dancing, guests were treated to a 20-minute Broadway revue, Weiss adds.

Alisa Zapiler, head of Denver-based Creative Events and Occasions, describes the theme of a recent bat mitzvah simply as "abstract." For "Marni's Neon Night," Zapiler used a vivid neon colors during the daylight hours. But as night fell, black light made the centerpieces, chairs and table linens glow.

Along that line, Tolve points to a bar mitzvah that her team worked on with Creative Events and Occasions that keyed on the celebrant's expertise in swimming "but nothing kitschy involving goggles or swim trunks," she explains. Instead, the event team created abstract acrylic pieces to depict swim lanes, which were suspended above tables, and swim stroke silhouettes." The focal point: the dance floor, which was covered in vinyl printed to resemble pool water, complete with swim lanes.

GREAT EXPECTATIONS A continuing trend is the growing sophistication of both child and adult guests, event experts say. For example, "Even for the kids, menus are not just burgers and pizza," Zapiler says. "Instead, they want dishes from their favorite restaurants or food trucks." Another hit: "All kinds of mini things," she notes, "the bite-size, sophisticated things that adults like," along with mock cocktails. And like their parents, kids cannot get enough bacon and chocolate, she adds.

And kid parties have to please the grown-ups as well. Adult guests expect the party "to meet their needs," Zapiler notes. "Adults' expectations are high. It's not just a kids' party. Adults want to be entertained, to have a fun evening at a full-blown event."

MORE THAN MITZVAHS While mitzvahs dominate the children's event market, some newer milestone events are starting to pick up steam.

Wilkinson says she has seen a "huge increase" in high-end baby showers and first birthday parties. And while some people think quinceaneras as just the cousins of Sweet 16s, this segment is only getting bigger, says Luis Molina Jr., part of management with Fantasy Designers of Miami Lakes, Fla.

The quinceaneras his company produces often require a custom stage—complete with elevator for a dramatic reveal-- where the celebrant makes her entrance, often accompanied by special effects. The events also frequently include dinner, dancing and entertainment. "Quinceaneras could be considered some of the most elegant events," Molina says. "Very much galas."

See the complete article in the May-June issue of Special Events. Not a subscriber? We can fix that--just click here.

Sunshine and Showers: An Event Designer Creates Her Own Baby Shower
Jul 16, 2014