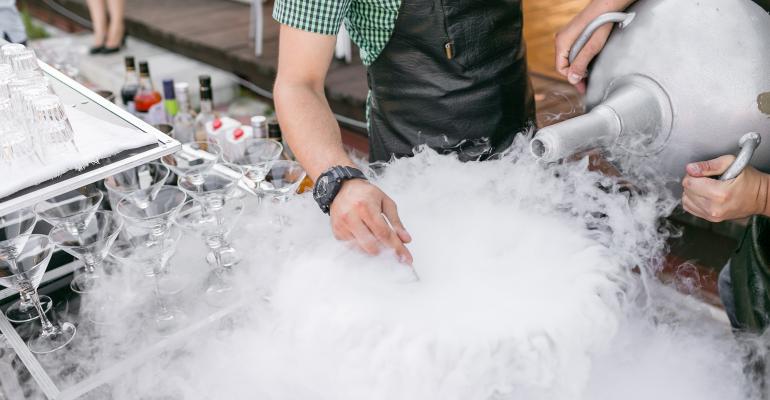 Event guests love the "fog" from dishes prepped with liquid nitrogen, but the FDA warns that it can be dangerous.

Liquid nitrogen adds drama to cocktails and desserts at special events, but last week the U.S. Food and Drug Administration issued an alert that it can be dangerous. Here is the alert:

The U.S. Food and Drug Administration alerts consumers and retailers of the potential for serious injury from eating, drinking, or handling food products prepared by adding liquid nitrogen at the point of sale, immediately before consumption. These products are often marketed under the names "Dragon’s Breath," "Heaven’s Breath," "nitro puff" and other similar names.

Liquid nitrogen, although non-toxic, can cause severe damage to skin and internal organs if mishandled or accidently ingested due to the extremely low temperatures it can maintain. Inhaling the vapor released by a food or drink prepared by adding liquid nitrogen immediately before consumption may also cause breathing difficulty, especially among individuals with asthma. This safety alert advises consumers to avoid eating, drinking, or handling foods prepared using liquid nitrogen at point of sale and immediately before consumption, due to risk of injury.

In general, other foods treated with liquid nitrogen prior to the point of sale and before consumption, for example some frozen confections, are treated in such a way that results in the complete evaporation of liquid nitrogen before reaching the consumer and are no longer at an extremely low temperature, and therefore do not pose a significant risk of injury.

Consumers who have experienced an injury because of handling or eating products prepared with liquid nitrogen at the point of sale, immediately before consumption, should consult their healthcare professional. Consumers should also consider reporting their injury to MedWatch. The FDA encourages consumers with questions about food safety to Submit An Inquiry, or to visit www.fda.gov/fcic for additional information

"Independent restaurants (and caterers) shouldn’t be a casualty"
Nov 23, 2020

Delicious While Distancing: Appetizers for the COVID Age
Sep 25, 2020