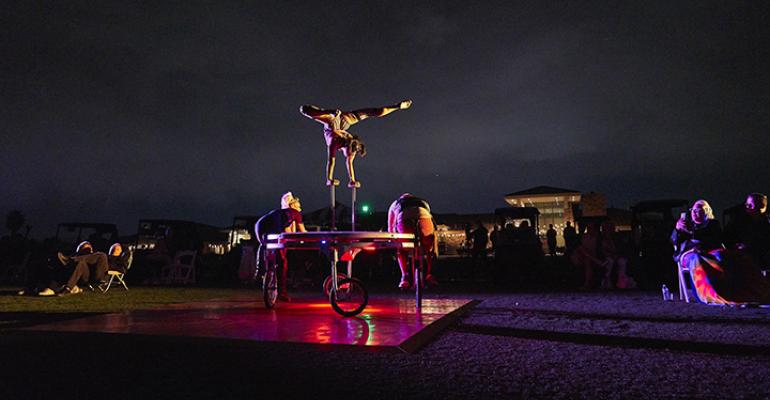 Families around the country were cooped up for the past year dreaming of the fun and food featured at their favorite carnivals and festivals. This longing became even all the more torturous, certainly seen as comfort food continued to climb to the top of food trend lists.

Fortunately, events are back and so are the delicious festival foods that entice the tastebuds of so many. Earlier this spring, all of the fun of festival food was on full display when Jim Stanfill, General Manager for Las Vegas’ Bear’s Best golf course, teamed up with Cirque Mechanics to deliver the first-ever Drive-N-Dine Circus, where guests dined on circus favorites while enjoying a performance from Cirque Mechanics, from the comfort and safety of
parked golf carts.

“I think this project has a lot of life in it going forward because it’s an intermediary step to being back to full-blown events,” said Chris Lashua, Founder and Creative Director for Cirque Mechanics.

For the event, guests purchased a ticket package which included admittance to the event, an assigned golf cart and a pre-packaged meal. For the actual performance, Cirque Mechanics produced their “Pedal Punk, A Rowdy Circus Where the Mischief is on Wheels" circus show. Some of the acts featured during the show included a contortionist, a trampoline act, a balancing act, a group acrobat act, and a comedy routine.

“We created an event that was artistically and theatrically compelling,” Lashua said, “but that was safe.”

Lashua said he liked the idea of golf carts, rather than a traditional drive-

-in event, because it allowed them to get away from the blacktop and instead enjoy the beautiful backdrop at
Bear’s Best.

“A lot of people went in the direction of the traditional drive-in, but the scale is wrong for the circus because you’re so far removed from the performance,” he said. “But, with the golf carts you can park them more like a theater, while still having the nostalgia of a drive-in.”

Stanfill said he was beyond excited to have the golf course be part of an event like this.

“We were trying to get outside the box and think of other ways to use our space,” he said. “So, it was fun to see us use our space in some way that was untraditional and wasn’t golfers just hitting golf balls.”

The food for the Drive-N-Dine Circus was provided by Jack’s Place restaurant at Bear’s Best and featured many circus and carnival favorites. When purchasing their event tickets, guests would select which of the food packages they wanted, and then during the event they would pick up their pre-packed meal at the “concession stand” when there parking section was dismissed.

“Before the food, we were trying to figure out how to make the event fun, unique, and safe,” Stanfill said, “and then how to enhance the experience with food.”

In addition to the included package, The Midway, guests could also upgrade their meals for an additional charge.

“There are certain things that seem to go well with a circus, so we had a really fun time coming up with food packages that are of that genre,” Lashua said. “But then it became how can we do the hot dog and make sure it’s a gourmet version of it. How do we spruce that up and make it interesting?”

Lashua and Stanfill hope to do additional events together in the future to show how events, food and golf courses can go hand-in-hand.

"We can do a beer garden, taco stands, a bicycle food delivery system, a roaming cart with hot dogs, picnic style food, or even car hop style service,” Stanfill said. “We can give golfers and other event attendees something other than the traditional box lunch.

“We are so much more than just a golf course because we can do things differently.”