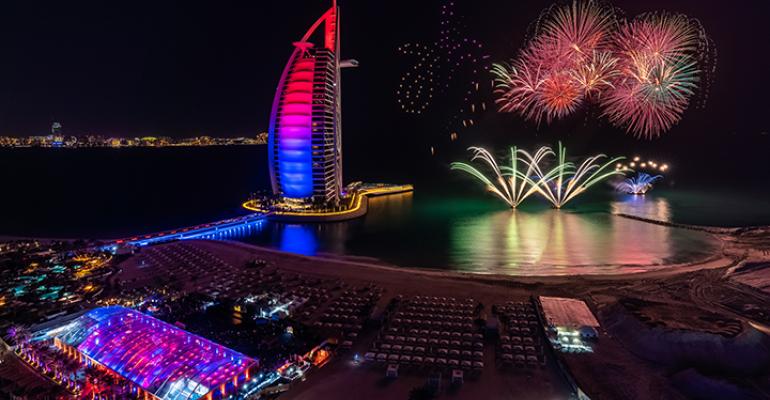 Start Slideshow ›
The team from EventWorks overcomes a wide range of challenges to produce a stunning incentive.

Big-time incentive events require top-end production values, stunning settings, and exciting entertainment as the basics. But what happens when the event also must not only meld clashing cultures, but also reconfigure everything thanks to weather weirdness? The team from EventWorks came through.

The massive event, held over eight days in January, brought more than 10,000 guests from Amway China to Dubai for another of the company’s landmark incentive events. These guests are VIPs: “China is the largest market for Amway,” explains EventWorks CEO Ted Bowers. “Sales top $2 billion annually, and the company has over 1.5 million distributors throughout the country. It is considered a top honor to be invited to the annual reward event.”

The 2020 program was a series of identical events for more than 10,000 guests in eight waves. The climax: the final night gala themed to “Arabian Nights.”

As guests arrived at the outdoor event, they were treated to ayallah dancers and photo ops, including a “flying carpet,” henna tattoo stations, and levitating performers. The main stage and four satellite stages allowed for nonstop entertainment during dinner, followed by a 45-minute show featuring a performer singing a Lady Gala song in both English and Mandarin, so that the guests could sing along. After performances by LED belly dancers and fire dancers, the evening concluded with fireworks and PyroDrones spelling out “Amway” beside Dubai’s iconic Burj al Arab.

But …. The “outdoor event” quickly pivoted to “indoor event” for nights three through six, when epic rains forced the team to move the production to the nearby Madinat Arena. “Since everything moved indoors, we created a new blueprint,” Bowers says. “We had to combine all entertainment into one space. All media had to be reprogrammed. All the show elements had to be adapted for a smaller stage. Thankfully, our local producer and crew were nothing short of amazing. We all worked around the clock to get this done in time.”

And the challenges just kept on coming. Once the skies cleared, the client asked for the show to move back outdoors. The EventWorks team complied—including repairing the huge dinner tent damaged by the storm—to stage the final two nights outdoors in the original setup.

Dramatic Dubai—with its stunning architecture, huge shopping malls, and beautiful beaches—made for a striking setting for the 25th anniversary of Amway China. But the EventWorks team had to navigate some delicate cultural clashes.

For example, “Chinese audiences love magic, but this posed another challenge, as magic is considered evil in Arabic culture,” Bowers explains. “Thankfully, through [the TV program] ‘Arabs Got Talent,’ we found a champion magician who delivered the main stage show.” The talented singer who performed in both English and Mandarin was from India passing as Middle Eastern. EventWorks provide a vocal coach who spent three months teaching her songs in Mandarin. EventWorks TITLE Janet Elkins says, “it was also terrific working in a country comprised mostly of immigrants; Brits, South Africans, Indians, Pakistanis, Ethiopians and a few local Emiratis as well. How wonderful it was to see and experience how everyone gets along and respects each other. I will be forever grateful for these memories.”

PLANNING PERFECTION A full year’s worth of work went into the planning the event, with the L.A.-based EventWorks team bouncing between China and Dubai to nail down details and monitor progress.

The rapport between client and event team is a long one. “Our 12-year-long friendship is based on mutual trust,” Bowers says. “The repeated collaborations allowed us to develop a strong relationship, based on the fact that we deliver on our promises. We always invest in a lot of research to develop new concepts that address the taste of Chinese guests, the client’s purpose, and the iconic value of the location.”

“We are incredibly proud of our team in Los Angeles and in Dubai that overcame cultural and linguistic diﬀerences, time zones and fatigue for 10 months,” he adds. “Everyone brought 100 percent of their energy, skill and enthusiasm to this assignment. No one ever said ‘no’ to any of the last-minute changes. Everyone met the challenges.”