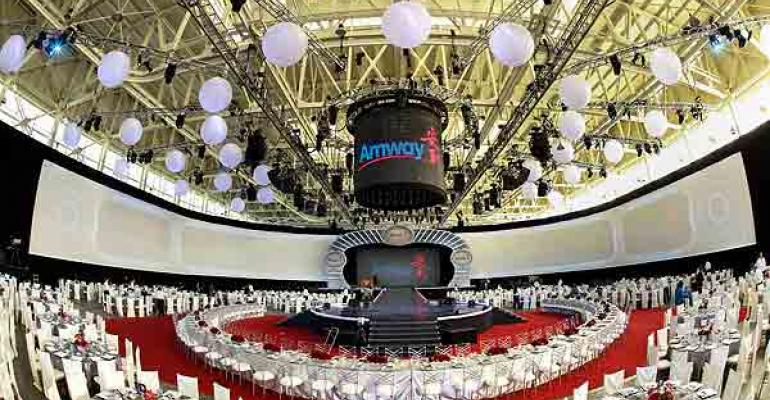 A whopping 1,600 guests were treated to a whopping closing night gala for top Amway China salespeople, held in Hawaii in February. And as any event pro might expect, the road to the event's success was paved with whopping challenges.

Lead company EventWorks, an event production powerhouse based in Los Angeles, already knew the client well, having created a series of galas for Amway China three years earlier. As a result, the EventWorks team was well-versed about the group's unique requirements. For example, not only does the affluent Chinese audience expect an elaborate, extravagant opening to shows, but Chinese visitors must jump through hoops to visit the U.S., including obtaining exit visas and promising to adhere to stringent regulations governing their behavior—a tactic designed to reflect well on the Chinese government. "We noticed that the guests were exceptionally elegant," notes EventWorks president Janet Elkins, who oversaw production with her partner, Ted Bowers.

The event venue—a hangar at the Pacific Aviation Museum in Pearl Harbor—hit an emotional chord with guests, as it houses some of the famed "Flying Tiger" airplanes, used by America to defend China during World War II.

The evening treated guests to a reception and gala dinner packed with entertainment. Keeping in mind the oversize scale of the room, the event team developed an eye-popping center set piece: a massive circular LED screen 16 feet in diameter and 15 feet tall. "The screen used 254 of Vision's 15 mm flexible LED tiles and was hoisted up and down at various times during the show using high-speed motors, " Todd Roberts, president of Brea, Calif.-based Visions Lighting, explains. "Six cryo jets added at the bottom of the screen enabled producers to turn it into a launching rocket ship during one show sequence."

During the elaborate show, the big circular set piece "launched" as a rocket, followed by aerial performer "space aliens" dropping into the room from the ceiling. Next came a 3D rigging truss aerial act expressly designed for the event, while lighted dancers moved from the stage into the audience. The 3D rig—the event element that got the biggest "wow" from the audience--"allowed aerial acrobats to move in every direction of the room," Elkins says, "a technique inspired by pop stars Pink and Coldplay's concert performances as well as action films such as 'Skyfall.'" All told, the troupe included 36 dancers, aerialists and roller-skaters, from both L.A. and Hawaii.

What the guests didn't see was the drama unfolding as the event team worked to get the show off the ground.

Even though the event team had gone to great lengths to arrange for two-week access passes for the 200-member crew, venue guards did not get word of the preparations, and refused site access to the event team. "During the whole two-week span of set-up, crew members would sporadically be stopped by guards and be required to pass a time-consuming background check in the pass and ID office," Elkins explains.

The surprises continued. Without telling the event team beforehand, the client invited Hawaii's governor and a senior military official to only to attend the gala, but to speak—requiring the event team to adjust the show run on the spot to accommodate them.

On top of that, the client also asked the producers on-site to add a surprise number—a homage to 29 guests who were celebrating their birthdays that week. But the team made it all work: "We went to the local Home Depot and purchased materials to build a tiered display for 29 customized 3D rocket shaped birthday cakes that featured the Amway logo," Elkins says. "Secondly, we created a digital display turning our cylindrical LED screen into a giant cake with 29 candles blazing on top."

Outrageously Alice: EventWorks and Kuoni Scottsdale Dream Up a Dramatic Alice in Wonderland Gala
May 16, 2012