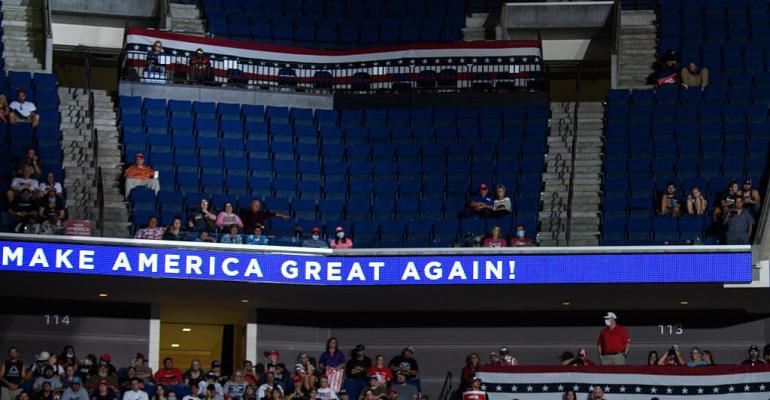 Photo by Nicholas Kamm / AFP via Getty Images
The upper section of the arena is seen partially empty as U.S. President Donald Trump speaks during a campaign rally at the BOK Center on June 20 in Tulsa, Okla.
Event Types>Corporate Events

Maybe you don't have U.S. presidents for clients or cope with controversy at your events. Even so, planners can take useful lessons from the lackluster rally held for President Donald Trump in Tulsa, Oka., on Saturday, says our sister publications group MeetingsNet:

When President Trump returned to the campaign trail with a rally at the BOK Center in Tulsa, Okla., on Saturday, the event was widely seen as a disappointment. Turnout was reportedly less than 6,200 supporters for an event that organizers had expected to fill the 19,000-seat venue, and an outdoor speech before the rally had to be canceled because the expected overflow crowds never materialized. While the reasons for the sparse rally are still being debated, planners from all political stripes can learn from the campaign’s missteps.

Consult the calendar before planning an event.
Plans for the rally got off to a controversial start when organizers scheduled it for June 19, the day marking the end of slavery. Planning the event on Juneteenth was seen as an insensitive gesture in the wake of weeks of nationwide protests against racism in America. Be sensitive to how your organization is perceived (an oil drilling company annual meeting might want to avoid Earth Day) and what your attendees value (the weeks of Chinese New Year celebrations are a time when many Chinese people travel to visit family.)

Online influencers have an impact.
The news that TikTok users mobilized to reserve thousands of tickets for the Tulsa … MeetingsNet