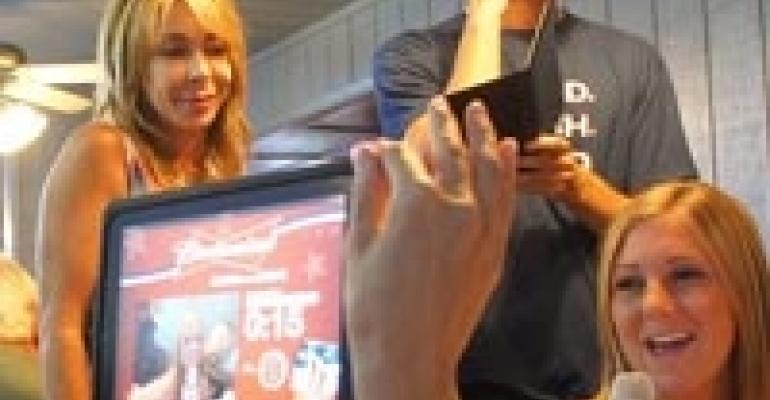 The Message, Start to Finish: For Budweiser’s 21-day cross-country campaign, beer behemoth Anheuser-Busch tapped St. Louis-based Switch to deliver the message “On America’s Birthday, Drink America’s Beer” at select fairs, festivals and resorts in the lead-up to the July Fourth holiday. The goal: to increase the brand’s relevance with 21- to 35-year-old consumers while simultaneously supporting the Folds of Honor Foundation, which benefits military families.

True to its name, Switch changed-up the standard structure, turning a series of Budweiser sampling events into a material-gathering mission for the event’s next phase. The firm launched the multi-day campaign by stationing brand ambassadors in bars, in stores and at events in 70 markets, where they offered cold beer samples and recorded more than 14,000 video messages from consumers to military service personnel using Switch’s proprietary iPad2 app. A red-white-and-blue palette branded the Budweiser sampling events, and further trumpeted Budweiser’s patriotic message.

Uploading more than 12,000 of the recorded video clips to searchable custom Facebook and YouTube pages—where they were shared with almost 26,000 people—Switch transformed the post-event phase into a virtual event itself. The team also incorporated consumer messages—and, in turn, their own brand message—into 20 Pandora/Budweiser-channel audio spots supporting the Folds of Honor Foundation; further, Budweiser donated $2 million to the foundation as part of the initiative.

Along with that fine feeling, Budweiser tracked a 16-percent spike in its fan-focused “Band of Buds” crew signups in sampling markets, and a “noticeable sales lift” in program markets over non-program markets.

Top Messaging Tool: Switch director of events and experiences Christina Wilde says her company's secret weapon is, and has always been, engaging storytelling.

“We bring metaphors to life through customized conversations,” Wilde explains. “It is often grass-roots, with the goal of developing a deeper dialogue with a target audience. Although not as sexy as digital media, it can be extremely effective.”

The Big Event: AMD at VMworld

The Message, Start to Finish: “One of the most interesting challenges our clients often face is establishing a brand presence at proprietary events that belong to their partners, their customers and sometimes even their competitors,” notes Alicia Wysk, executive creative director of Detroit-based experiential marketing giant George P. Johnson. So how does a brand navigate conflicting interests to drive tangible results? “We always begin by crafting a dead-on targeted messaging and integrated engagement strategy,” Wysk says.

In the case of technology corporation AMD’s presence at VMworld—the annual global conference for virtualization and cloud computing—GPJ used its proprietary Strategic Experience Mapping methodology to help its client develop a “Power of More Cores” message to cut through the clutter and highlight the distinguishing feature of AMD’s processors.

This messaging platform became the foundation of a pre-event awareness and lead-generation campaign that included Twitter saturation, blog posts and trade media coverage, all carrying the “Power of More Cores” message. Buzz from the pre-event campaign helped the AMD’s sales team to lock in meetings and generate traffic to AMD’s physical conference space—the concept for which was also based on the firm’s message.

Designed as a labyrinth, AMD’s space “offered a progressive experience that guided attendees through multiple pathways within the booth and the experiential storyline,” Wysk explains. “Once an attendee arrived at the physical center of the booth, they also reached the ‘core’ of the message,” delivered through graphics, QR codes and interactive demos.

Top Messaging Tool: Sure, powerful technology is par for the course at GPJ. But Wysk says it’s staff empowerment that is the company’s ace. “We rely most on talented GPJers and on the freedom they have to push clients past their comfort zones,” she notes. “We empower all our creatives to help brands move past the familiar and standard to new, undiscovered and revolutionary ideas and tactics.”

Next Page: Extraordinary Events Helps Hanwha Get on Base

The Message, Start to Finish: Time-zone differences, cultural questions and a scant three-week lead time were just a handful of the challenges Extraordinary Events faced with a launch event kicking off Hanwha Solar’s five-year sponsorship of Major League Baseball’s San Francisco Giants. The event, a “day at the ballpark” for a sell-out crowd of 43,000 fans, needed to increase brand awareness for Hanwha—Korea’s third-largest company, but a virtual unknown in the U.S. It also had to communicate a message of environmental responsibility and to tout Giants’ home field AT&T Park as the greenest ballpark in the U.S.

Sherman Oaks, Calif.-based Extraordinary Events, which cut its international teeth with extensive work in Asia, scripted every aspect of the event, to ensure flawless message delivery across cultural and language barriers.

Carrying the event’s message past the final inning, former Giant Will "The Thrill" Clark—on hand at the game to greet VIP North American Hanwha customers—appeared in a video supporting Hanwha Solar’s partnership with the ball club. And making sure that message sticks long after the launch event, Hanwha’s signature “sun” became a permanent installation in the ballpark, as a sun-shaped custom LED sign hovering over left field for all in the stadium, and the Giants’ TV audience, to see.

Top Messaging Tool: Jon Michaels, executive vice president of Extraordinary Events, says his firm recognizes that brand recognition gets a huge boost from social media. “By reaching out via Twitter, live YouTube channels, Facebook, Pinterest and smartphone applications,” he explains, “event marketing starts prior to the event and continues after the actual event is over.” Engaging these assets assures a much longer event timeline, and in turn, “enhances the value of the client’s marketing dollar.”