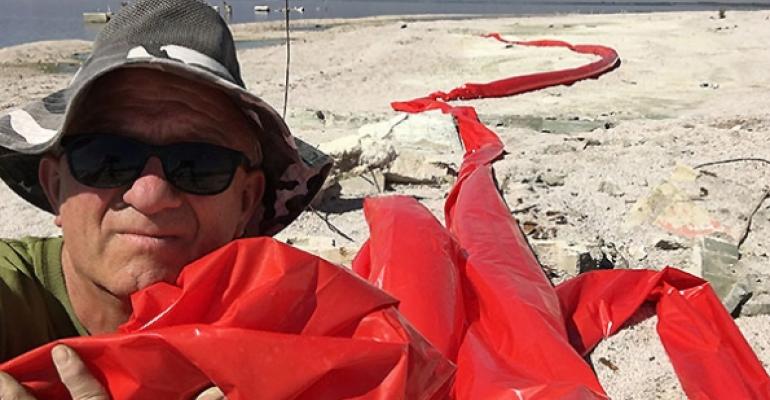 <p>As street artist, businessman and environmental activist, Doron Gazit has found inspiration and direction in the beauty of balloons</p>

As a child, Gazit thought he would be an engineer. Bu the life of an artist kept calling him. During college, he made his living as a street balloon artist. "I realized the twisty balloon was like a 3-dimensional line with which I could 'draw' over a landscape, as if it were my 'canvas,'" he recalls. For him, balloons go beyond pretty toys; they are art pieces. "Think of it: The balloon represents nothing! It’s just color, shape and air," he says. "I realized it had an expression of its own and decided to make it my form of expression."

This self-expression led to his business. In the mid-1980s, Gazit was at Venice Beach "playing" with some elongated tubes he had created as the Israeli representative for an international sculpture conference in Los Angeles. "Someone passed by who happened to be in the design team for the 1984 Olympics, saw me and my work, and asked me to make a presentation," he recalls. "I ended up creating inflatable sculptures in nine different venues."

That first project blossomed into a profession." I saw significant interest from event planners in Los Angeles. It felt like I should stay for a bit and realize the opportunities coming my way," he says. "When it looked like this was a serious business, I founded Air Dimensional Design in June 1986."

From those tubes he "played" with on the beach, Gazit has developed a wide range of design pieces for event installations over the years.

"In the 80s, the colorful Airtube designs were very much in vogue for events, malls, stages--you name it! I was involved in so many events in the U.S. and worldwide that sometimes when I woke up in a hotel room, I couldn’t remember the name of the city I was in," Gazit says. "Then when we came out with the Dancing Inflatables after the 1996 Olympics, the Fly Guys were a sensation for large corporate events worldwide. Of course they lost their charm with the event world once they became ubiquitous. Now we find that our Hi-Light designs are much sought after in creating what we term 'Selfie Gardens,' where event guests pose between the inflatable shapes and then share the images on social media." He adds, "The times are a'changing, but the event world has never changed, in that it's always seeking what’s new and newer."

Although he runs a thriving business, Gazit has never given up his life in art. Out of concern for the environment, he has launched the Red Line Project, where he stretches a 500-foot-long red tube in landscapes devastated by climate change and man's misuse of nature. "I have installed the Red Line in the sinkholes of the receding waters at the Dead Sea in Israel and by melting glaciers in Alaska, as well as the devastated landscape in the Salton Sea of California, and the receding waters of the Great Salt Lake in Utah," he says. And he won't stop: "I intend to carry this project on to more sites worldwide. I am preparing a crowd-funding campaign to help me carry the Red Line Project to the illegally logged rain forests in the Amazons, the palm oil plantations in the shrinking Brunei forests, and other locations."

ADVICE FOR NEWBIES "You should always be driven by passion and creativity--what we call here 'cre-AIR-tivity.' The job is very stressful, but it’s the passion that makes it worthwhile and fun. It’s that drive that makes you excel and thrive."

I WISH I'D KNOWN … " AirDD has evolved through creativity and passion and thanks to the tremendous help and guidance we received from the wonderful people that worked here through the years. However, I feel that it would have saved me many mistakes--and money--had I taken the time to study business methodically."

PROJECT PRIDE "I’m very proud of the large scrim we created for Prince at the 2007 Super Bowl, under the artistic direction of Bruce Rodgers and produced by Ricky Kirshner. It was the first time we worked on such a big scale with these scrims. It was raining, and we were afraid the scrim would absorb humidity and become too heavy to rise. But it did."