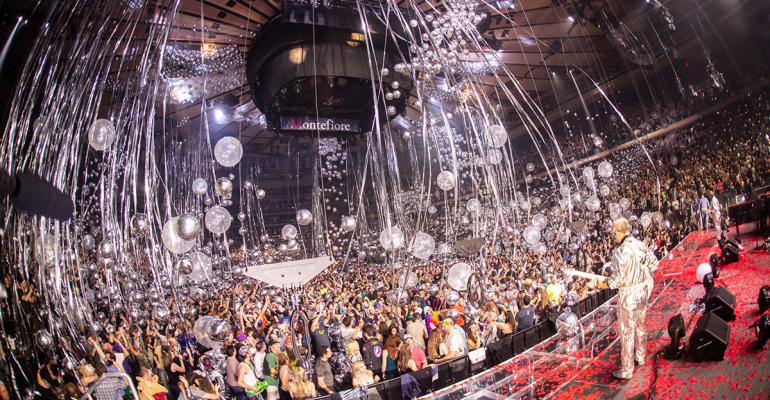 Great special events from throughout the world were honored at TSE 2020 in Las Vegas.

Special Events magazine is proud to announce the winners of the 2020 Gala Awards.

The magazine received entries from around the world, including Canada, China, Germany, Ireland, Israel, Thailand and the United States. Members of the Special Events Advisory Board evaluated the entries and determined the nominees.

The winners announced last night at The Special Event at the Mandalay Bay Convention Center in Las Vegas. 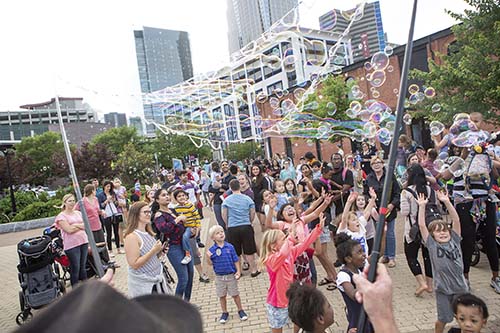 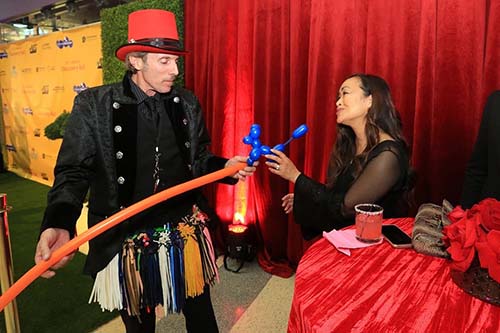 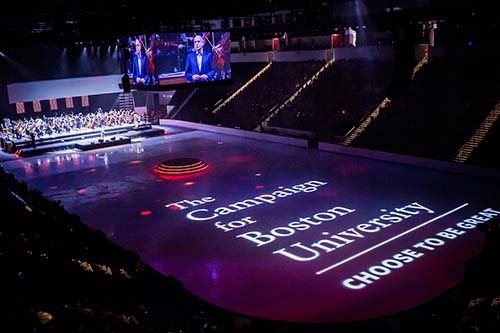 “Boston University Campaign Victory Celebration”
Stratelyst Creative, Austin, Texas
Boston University celebrated the end of its seven-year, $1.8-billion fundraising initiative with two milestone events: a gala dinner for 400 of the biggest donors to the university, followed the next evening by an immersive 3-D-mapped show on ice for 3,000 members of the community at large. With more than 500 performers over the course of two days, the celebration featured synchronized skaters, the college choir, band, opera, and ice hockey club, along with ice-skating aerialists and the entire Boston Pops Orchestra. 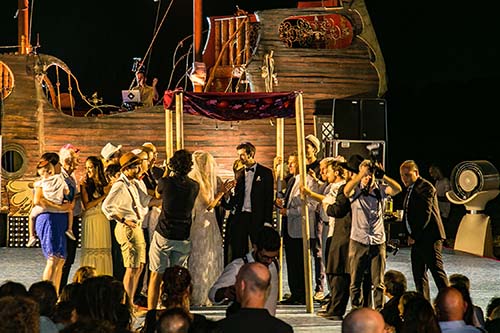 “Eternity Wedding”
Bebke Productions, Even Yehuda, Israel
The inspiration for this wedding came from the event where the couple met: the Israeli edition of the Burning Man Festival. The couple wanted to provide their guests with an artistic experience that would not end once the wedding ended. In response, the event team created craft stands where guests hammered, painted and sewed the couple’s wedding decorations and future furniture; the wedding couple’s home now holds the furniture created at the wedding.

BEST WEDDING: BUDGET $1,000 AND ABOVE PER GUEST 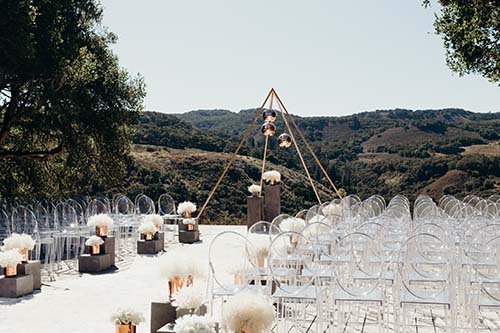 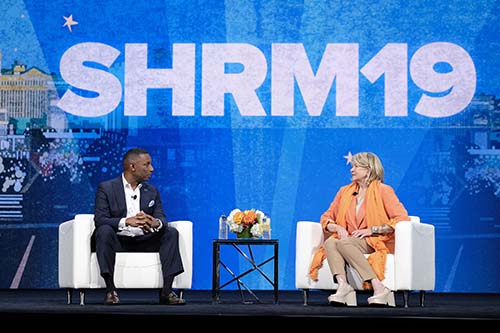 “SHRM Annual Conference 2019”
INVNT, New York
The SHRM Annual Conference is a must-attend for human resources professionals seeking to enhance their skills, stay abreast of the latest trends, get certified or re-certified, and engage in networking activities. Central to this experience are the conference’s four general sessions, which in 2019 featured four engaging set designs, the latest tech, and talent ranging from Lionel Richie and Martha Stewart to Brene’ Brown and Toms Shoes founder Blake Mycoskie. 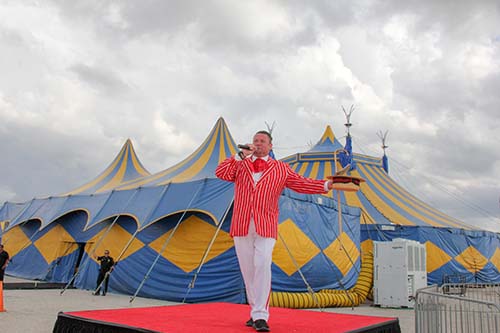 “Circus World Celebration--Under the Big Top”
The RK Group, San Antonio
This 95th “birthday spectacular” celebrated a beloved mother, business pioneer and community leader. The circus-themed event keyed on the three-ring tents of old, with guests transitioning into three separate, spectacular tented environments supported with more than a half dozen smaller tents used for operations. The three primary tents were a 30- by-50-meter clearspan structure, a 50-meter round tent, and a 40- by-60-meter clearspan structure 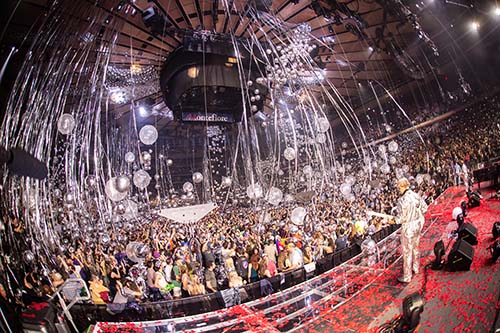 “Phish New Year's Eve Concert”
Future Affairs Productions, Pawtucket, R.I.
For the lucky 22,000 who scored a ticket to Phish’s sold-out concert on New Year’s Eve in New York, a highlight was the theatrics at midnight. Cued to lyrics in the song “Mercury,” a red stage wash showcased a four-minute rain of red rose petals floating down from the ceiling across the front of the stage. At midnight, the “Mercury” theme came to life with a balloon drop of thousands of silver orbs resembling beads of mercury. 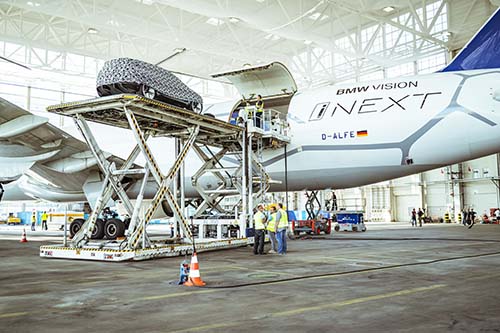 “BMW Vision iNEXT World Flight”
VOK DAMS Events, Wuppertal, Germany
Inspired by Jules Verne's "Around the World in 80 Days," the event team took the BMW Vision iNEXT to media representatives in four cities on three continents within five days. “BMW iNEXT World Flight” featured a cargo plane converted into a high tech, futuristic stage. Surrounded by an impressive 360-degree light and media installation and presented on a built-in turntable, the program offered some 400 journalists from around the world the experience of the concept vehicle at virtually same moment 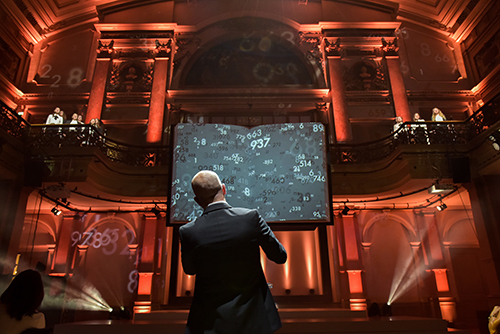 “Investment Aktuell 2019: Life Counts”
Insglück, Berlin
Every year, Union Investment provides the directors of its partner banks with insights into innovative topics at its annual flagship event: InvestmentAktuell. This year, the program took the theme of the numbers that rule of our lives—from simple phone numbers to complex data—and showed the incredible power numbers have to shape and enrich our lives. According to the motto of “Life Counts,” the theme of the campaign was translated into a multi-sensory experience designed to amaze, amuse and inspire.

BEST EVENT ENTERTAINMENT CONCEPT AND EXECUTION: BUDGET $100,000 AND ABOVE 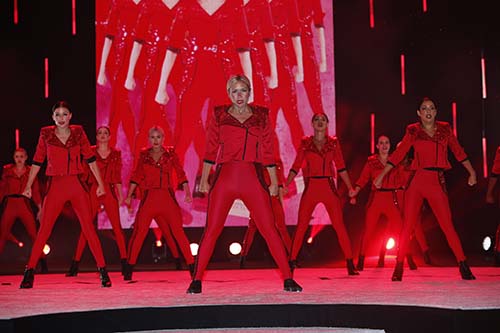 “Who Runs The World? Girls!”
Bravo! Entertainment, Dallas
For an international beauty company’s big annual event, the event team put together a custom entertainment package empowering women. The production comprised 4,000 square feet of stage, 1,000 hours of rehearsals, 40 performances in two weeks, 111 cast members from all over the United States, custom, interactive content on 12 LED screens, 500-plus costumes, 175 interactive props, 32,000 attendees--and one custom Scottish tartan. From the opening production number and surprise product reveals to celebrations and inspirational pieces, every moment of the entertainment was strategically created to reflect the brand, celebrate success, and motivate top salespeople. 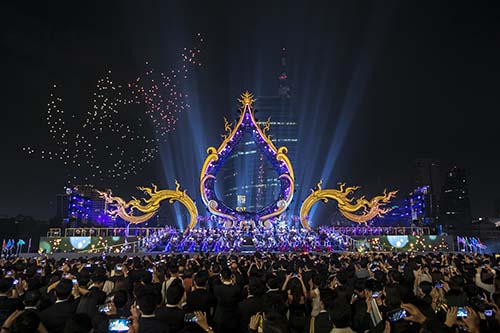 “The ICONSIAM City Opening Mega Phenomena”
Index Creative Village, Bangkok
To celebrate the opening of the Iconsiam City development, the event team created a 30-minute show for more than 550,000 guests. Keying on the theme of “the best of Thailand meeting the best of the world,” the program combined traditional Thai culture with innovative new technologies and world-class contemporary performances, including 1,500 drones, 45 LED drummers, and 200 student performers

BEST EVENT PRODUCED FOR A PRIVATE INDIVIDUAL: BUDGET UNDER $1,000 PER GUEST 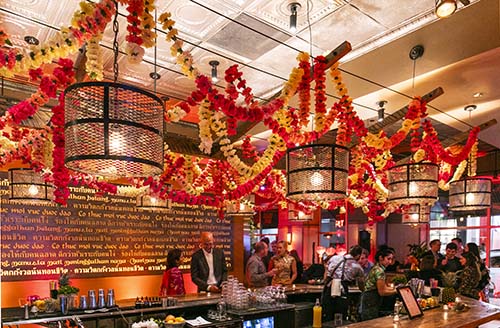 “50th Birthday Celebration”
Corinthian Events, Boston
Keying on the theme of “One Night in Singapore,” the event team oversaw the buy-out of a local Southeast Asian restaurant for a birthday bash for 110 guests. Challenged with transforming the public space, the team skillfully covered intrusive windows with cling, and used extensive florals to add atmosphere. The chef went all out with a wide array of appetizers, a build-your-own bahn mi station, and custom cocktails.

BEST EVENT PRODUCED FOR A PRIVATE INDIVIDUAL: BUDGET $1,000 AND ABOVE PER GUEST 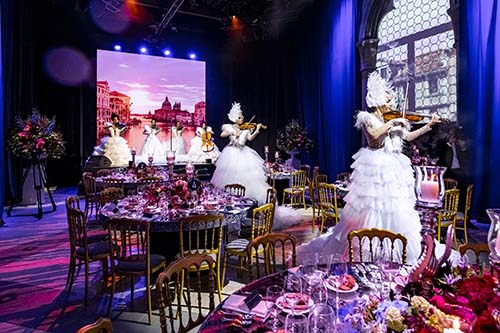 “An Adventure”
Events Man, Hong Kong
Guests at this three-day extravaganza started at the Ritz Paris for champagne and high tea, and by 5 p.m. were onboard the Venice Simplon-Orient Express. The 24-hour train journey included gourmet meals, fine wines and a rollicking party that rolled through four countries. Upon arrival in Venice, guests were whisked to the Hotel Cipriani and a masquerade ball featuring a performance by Kylie Minogue. 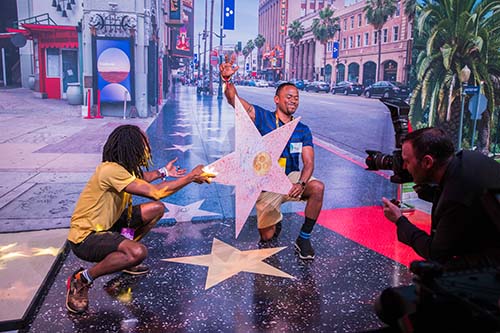 “Facebook Creators Lounge at VidCon 2019”
Gallagher, Los Angeles
Facebook has hosted a Creators Lounge for several years at VidCon, one of the largest conventions in the world for social media creators. To offer an elevated experiential atmosphere along with highlighting the new platform launch--the Facebook Creator Studio, which provides audio and video production tools to create content in Facebook--the event team created a video production studio that included editors, so that professional videos could be shot and edited on-site. 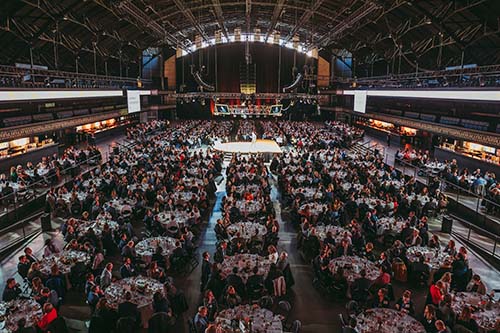 The Armory
Minneapolis
Dating back to the 1930s, this iconic venue is an historic landmark in the heart of Minneapolis. The indoor/outdoor space is designed to offer maximum options for customization and scalability, with the ability to accommodate groups from 25 to 8,000 guests, offering top-flight event management, catering, and audiovisual and production capabilities. 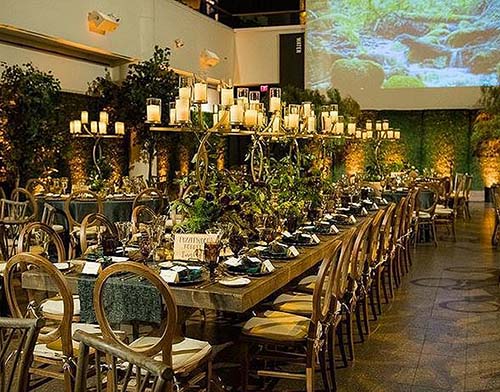 “Fantasy Forest”
To Be Designed, San Diego
For this 300-person sit-down dinner, the team’s objective was to tell a complex story based entire on design. The team had three goals: to convey the growth of the client--a law firm celebrating its 10th year; to include the firm’s and its clients’ earth-friendly interests; and to create a beautiful, one-of-a-kind dinner in a museum setting. The design theme developed from small greenery touches at the entrance and ended with a dinner in a magical, overgrown woodland where stunning imagery of the world’s major forests surrounded the guests. 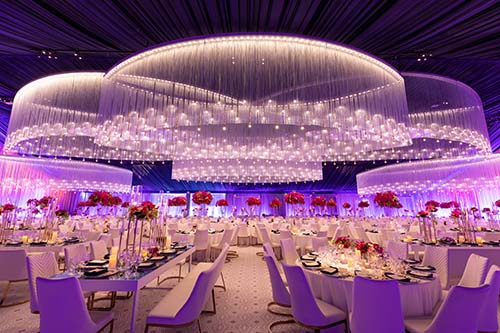 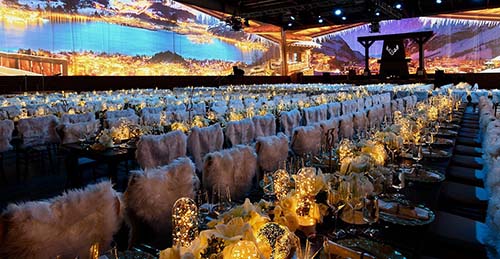 “Ski Chalet Holiday Soiree”
Silhouette Group, New York
It was a chilly December night in Austin, Texas, as 500 guests walked through the unassuming doors of an airport hangar into the base of a snowy mountain in a ski village. After cocktails, a grand doorway entrance led to dinner, where guests were transported to the top of the mountain and inside the dining room of the ski chalet. Guests found their seats at king dining tables, where elaborate runners of florals, greenery, fairy lights, birch wooden stubs and surprise elements such as antlers drew “oohs” and “aahs” from guests.

BEST EVENT PRODUCED FOR A CORPORATION OR ASSOCIATION: BUDGET UNDER $500,000 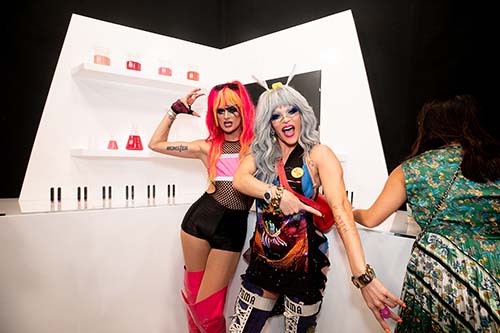 BEST EVENT PRODUCED FOR A CORPORATION OR ASSOCIATION: BUDGET $500,000 AND ABOVE 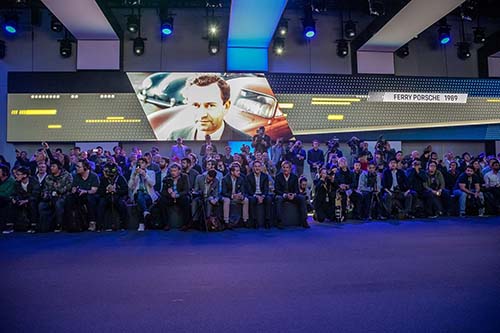 “World Premiere Porsche 911 "Timeless Machine"
Pure Perfection, Wiesbaden, Germany
Porsche founder Ferry Porsche’s notion of the “timeless machine” became the guiding principle and content source for the press launch of the latest model 911 for both live and online audiences. The event team created a time tunnel--250 meters long and 25 meters wide--as the launch stage for a retrospective journey showcasing the eight generations of the 911. The hybrid staging worked for the live audience of 400 as well as the 2.4 million viewers online.